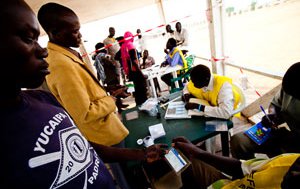 Image credit: ENOUGH Project
South Sudan’s people existed in a state of war for five decades prior to the country’s independence in 2011, and as a result have been long-deprived of the right to participate in a functioning democracy and to have their political voices heard
When I arrived in Juba, South Sudan in April of 2013, one of the very first things that I was told was that it was like the Wild West. "There used to be no rules. Now there are some rules, but everything still functions the same". I soon learned that this particular comment encapsulated the very real problem faced by South Sudan today: the feeble rule of law and the weakness of constitutionalism.

Following a referendum, South Sudan seceded from Sudan on 9 July 2011. In doing so, it officially brought to an end five decades of violent conflict between the North and the South and set in motion the process of healing the wounds of Africa’s longest running civil war, building peace, building a state and building a nation.

Over two years, South Sudan is struggling to overcome numerous hurdles in this process. My own time spent there demonstrated that the country was mired in corruption and abuses of power by political actors and the security forces, not to mention extreme poverty and deprivation. Reports from the press and human rights advocates point to a plethora of problems, including the intimidation of the press, child marriage, discrimination of women, cattle rustling, border disputes, clashes between traditional and government authorities, inadequate resource governance and bloody conflict along ethnic lines. South Sudan also has the second lowest literacy rate in the world.

Within this environment, civil society activity is heavily constrained, and the civic education and political engagement of the average South Sudanese citizen is limited. Around the time of the 2011 referendum, local civil society action did contribute to providing both civic and voter education, although the implementation of these activities was largely uncoordinated and unregulated. The initiatives were not aimed at general public education on civic processes, but rather a quick rush to educate voters on the procedures.

Currently, there are numerous local and international NGOs working hard to build peace in South Sudan. However, my own research indicated that much of the work being done tends to frame the barriers to peace as existing primarily at the localised and communal level. However, at state level the the endemic failure to respect the rule of law and the overarching structures that permit and perpetuate such problems remain largely unaddressed.

With independence, the Comprehensive Peace Agreement (CPA) between the North and the South officially expired and so ended both countries’ interim constitutions. In South Sudan, the Transitional Constitution was instated, stipulating a four year interim period which would end with the adoption of the Permanent Constitution of the Republic of South Sudan and subsequent general elections.

During the formulation of the Transitional Constitution, complaints were made over the exclusionary and top-down nature of the process. The newly installed president of South Sudan formed the Constitutional Review Committee, which was tasked with proposing adjustments to the interim constitution and drawing up a report concerning their adjustments. Initially composed solely of members of the ruling party, the SPLM, the Committee was openly criticised for its restrictive membership. In response to public demands for a more inclusive Committee, it was expanded to incorporate members from other political parties, faith-based organisations and one representative from civil society, although many civil society members felt that this individual did not represent the sector.

Second time round, civil society groups are working hard to remedy these issues, by broadening participation and the space for public voice within the drafting process for the Permanent Constitution. A network of South Sudanese NGOs, known as the Civil Society Resource Team, coordinated by Justice Africa and the South Sudan Law Society, is in the process of collecting and collating the views of citizens, with the eventual aim of lobbying for the inclusion of citizen views in the Permanent Constitution.

The Civil Society Resource Team consists of 18 civil society organisations working towards a participatory constitution-making process in South Sudan in which the views gathered, civic education methods used and advocacy efforts are shared. The resource team have gone through a process of capacity building, including exposure trips to Kenya, South Africa and Ghana, and training in facilitation skills, civic education methods and data collection.

The team has led citizens’ dialogues on the constitution in all ten states of South Sudan over the course of fourteen months, beginning in June 2012. The dialogues brought together over 1200 citizens including over 500 participants from all the counties of the respective states. The participants were drawn from a variety of stakeholders including traditional authorities, women’s groups, youth groups, civil society, state assemblies, members of parliament, religious groups and local government. In addition to the constitutional dialogues, Justice Africa also supported marginalised groups to organise discussions to analyse the Transitional Constitution and put forward recommendations and amendments towards a future constitution that is sensitive to and promotes the rights of women, the youth and those with disabilities.

The citizen dialogue process encompassed a broad range of topics, including peace and security, natural resource management, gender equality and the distribution of state power. Although the views expressed by individuals and groups across the ten states were highly diverse and at times conflicting, Justice Africa found consensus on several key issues including the problem of government corruption, the duty to protect and provide better for marginalized peoples, the need for independence of the three arms of government and the limiting of presidential power. Although the Transitional Constitution of South Sudan 2011 has a strong emphasis on decentralisation, the national government continues to be dominant, leading participants to call for a federal system of governance.

All dialogues demonstrated the sentiment among citizens that South Sudan’s natural resource extraction and the revenue that it generates are not appropriately dealt with, though concrete recommendations of how to remedy this were few. Affirmative action towards increasing the political representation of women and people with disabilities was a generally agreed-upon requirement, though the degree to which this should occur was a disputed issue. Overall, the recommendations that arose from the discussions were largely progressive and aligned with important democratic and human rights principles.

That being said, as much as the dialogue process places an emphasis on taking every citizen’s view seriously, some recommendations should be treated with caution. For instance, in one state it was recommended that women should not be allowed to run for political office until they are at least 30 to 40 years old. On a different topic, according to the current Transitional Constitution, the death penalty can be used to punish certain crimes – something which human rights advocates in the country are rallying against. From the citizen’s dialogues, numerous suggestions for the new Permanent Constitution regarding the death penalty have arisen, ranging from its total abolition, to recommendations that only women be exempted from it, or that it be kept in place for the crimes of murder and ‘treason’. Similarly, many participants in the dialogues suggested that adultery should be made illegal, punishable by imprisonment.