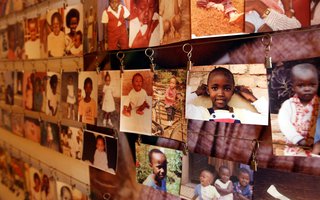 As with any society that has suffered horrible atrocities, post-genocide Rwanda has had to cope with an enduring trauma. This phenomenon has been observed not only among those that lived through the 1994 Rwandan genocide, but also among a second generation of Rwandans who continue to suffer from the societal trauma caused by this tragedy. This observation brings us to undoubtedly confirm that trauma, if not healed, can become a transgenerational phenomenon.

The transmission of trauma from one generation to another and its related consequences are gradually gauging the interest of peacebuilding organizations in Rwanda, key among them Community-Based Sociotherapy (CBS) which is currently working on this particular issue. CBS has explored the intergenerational legacies of the 1994 genocide in Rwanda, investigating specifically how the genocide, its aftermath and related events are transmitted within families to future generations.

In its recent research project, entitled “Intergenerational Legacies of the Genocide in Rwanda and Community Based Sociotherapy: Identifying and Addressing Pathways of Transmission,” it was revealed that the legacies of the 1994 genocide and its aftermath have been transmitted to the second generation within families through direct and indirect pathways, which are interrelated and interact in multiple ways.

The direct pathways of inter-generational transmission concern the ways in which the genocide and related events are reflected upon, reconstructed and explicitly communicated - or not - to the second generation.

The indirect pathways of inter-generational transmission are the ways in which the genocide affects the second generation’s socio-cultural environment and, in turn, the child. One of the research project's key findings, as pointed out by CBS, is that the legacy of the genocide, including its transmission of trauma and violence across generations, is a risk factor for sustainable peace and development.

"Regardless of our different ages, no one is immune from the suffering of trauma caused by our horrific history"

Living in a post-genocide context, all Rwandans have suffered from leftover trauma: no one can claim to be immune from the society’s ‘generalised’ suffering. The fact that even those who were born after the genocide can acquire the trauma from parents, relatives and neighbours, has put trauma-healing efforts on the list of priorities for ensuring sustainable peace and development in Rwanda.

In order to respond to this issue and break the cycle of trauma and violence, a consortium on the issue was recently formed, which is composed of the following organizations: Community Based Sociotherapy Rwanda (CBS), Prison Fellowship Rwanda (PFR), Anglican Church in Rwanda/Byumba Diocese (EAR-D/B) and Duhumurizanye Iwacu Rwanda (DIR). Supported by the Rwanda Multi Donor Civil Society Support Programme -Ikiraro Cy’Iterambere- the consortium is undertaking a pilot project called Umusingi w’Amahoro Arambye (‘The Foundation for Sustainable Peace’ in the Kinyarwanda language).

The project aims at facilitating evidence-based grassroots advocacy and strengthening citizen’s participation in order to contribute to the recognition and prevention of inter-generational transmission of trauma and violence at the family and community levels. The project is being coordinated by Community Based Sociotherapy Rwanda and implemented by Prison Fellowship Rwanda and the Anglican Church, Byumba Diocese, in close cooperation with the National Unity and Reconciliation Commission (NURC).

To effectively address this inter-generational trauma and contribute to ensuring sustainable peace and reconciliation, it is of utmost importance that the issues that mark the lives of Rwandans at a grassroots level are known to policymakers and the voices of the community members are heard. In addition, practices at the community level that aim at reconciliation and development could be even more effective when they are informed about trauma.

CBS explains that a trauma-informed approach: (1) is aware of the impact of trauma on individuals and communities and understands potential pathways to recovery; (2) recognises the signs and symptoms of trauma; (3) responds by fully integrating knowledge about trauma into policies and practices; and (4) seeks to actively resist the re-traumatisation and transmission of trauma. A trauma-informed approach complies with some key principles, such as creating safety, trust and mutual support, rather than a prescribed set of practices or procedures.

To be able to contribute to this, the Umusingi w’Amahoro arambye project has proposed a ‘4A’s strategy’: awareness, advocacy, acknowledgement and action. Through the project, the consortium intends to: increase awareness on the necessity of investing in responding to the problem of inter-generational transmission of trauma; develop and implement appropriate mechanisms for grassroots advocacy; identify and acknowledge issues related to trans-generational trauma; and, take actions to inspire policy and practices with the aim of ensuring that the healing and reconciliation processes in Rwanda are sustainable.

Launched on Thursday 28 September 2017, at Marasa Umubano Hotel, the project is expected to start a policy dialogue between national and local government representatives and local civil society, leading to the integration of efforts to counter inter-generational trauma in national policies and practices on national unity and reconciliation, mental health, youth and socio-economic issues.

To effectively break through the cycle of intergenerational transmission of trauma and violence, there is a pressing need to promote initiatives like the Umusingi w’Amahoro Arambye project and expand them throughout the country.

Such initiatives should create a conducive environment and provide opportunities for generations to freely talk with one another, for elders and adults to frankly share the truth about the past, and for young people to openly ask questions about the history of their country and guarantee the rights of imagining and creating the future they want.

Conflict prevention and early warning Peace education Transitional justice and reconciliation Dialogue and mediation Research Atrocity prevention Sustainability
Disclaimer: The views expressed in this article are those of the author and do not represent the views or position of Peace Direct.