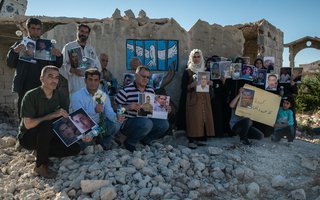 Families for Freedom in Binnish, Idlib

*The author is a peacebuilder working in Syria, who wishes to remain anonymous due to the security situation in the country.

The year 2020 has – without a doubt – brought an unprecedented challenge to every country around the world, leaving even the most powerful governments incapable of protecting their citizens. The global pandemic has been especially challenging for civilians in conflict zones who are forced to face coronavirus outbreaks with very limited resources and lacking infrastructure. For civil society actors and civilians across Syria, the pandemic has come with its fair share of challenges after years of devastation.

Here is a summarised timeline of what it’s been like in Syria over the past eight months:

2020 began with a continuous bombardment campaign by the Assad regime supported by Russia, directed towards civilians in northwest Syria’s Idlib province. The brutal campaign, which targeted homes, hospitals and schools, led to the worst humanitarian disaster that Syria has seen in nine years of conflict. It destroyed and emptied entire cities of civilians, including Maarat al-Numan, Saraqeb and Jabal al-Zawiya, forcing an estimated one million people to flee their homes to overcrowded camps.

Doctors and medical workers from all across Idlib engaged in demonstrations in front of hospitals, inviting UN Secretary General Antonio Guetteres to visit Idlib and see for himself how Russia, a member of the UN Security Council, was complicit with the Syrian regime in committing war crimes by targeting hospitals, medical staff and rescue workers.

By the time a ceasefire in Idlib was brokered between Turkey and Russia in March, which provided a temporary respite to some extent, for civilians to recover from months of bombing and displacement, COVID-19 had already been declared a global pandemic. This proved deeply problematic for Syria, whose medical infrastructure was decimated and severely under-resourced after years of living under siege by the regime and the Russian military.

Overall, the health infrastructure in Syria has taken a drastic hit, with a shortage of ICU beds, ventilators and testing kits

Thousands of families cannot return to their homes because the regime’s forces have captured their hometowns. These same families are finding themselves at huge risk as COVID-19 affects Syria; having to live in camps that are at four times their full capacity, and lacking hygiene, clean water and basic healthcare. Since the first case of COVID-19 was announced in Idlib at the beginning of July, fears have increased that an outbreak in IDP camps would be catastrophic. As of August 16th, there were 51 confirmed cases of COVID-19 in northwest Syria.

Overall, the health infrastructure in Syria has taken a drastic hit, with a shortage of ICU beds, ventilators and testing kits, whether in opposition-held Idlib, regime-held areas or northeast under the control of the Syria Democratic Forces (SDF). This situation has been no less exacerbated by the lacking response from the World Health Organisation (WHO) to one of the worst humanitarian crises of the 21st century.

Many local civil society groups including the grassroots organization Kesh Malek, who were already suffering from international funding cuts, have had to suspend their work due to continuous bombardment and the displacement of their workers, despite leading the peaceful struggle against oppression and extremism for years. Their suspension and subsequent relocation to safer areas has deprived communities of essential services such as education, psychological support, child protection, women’s empowerment and social entrepreneurship.

Many local civil society groups [...] have had to suspend their work due to continuous bombardment and the displacement of their workers, despite leading the peaceful struggle against oppression and extremism for years

Syrian civil society has yet again found itself bracing against another, unprecedented and potentially devastating threat to its existence. But many groups, along with medical and humanitarian organisations, have joined forces to respond to the global crisis and draw attention from the international community to the suffering of civilians, and the lack of support and resources received.

In April, the Syrian Civil Defence (The White Helmets) and Idlib’s Health Directorate launched Volunteers Against Coronavirus, an initiative to organise and coordinate efforts to respond to the pandemic. Several civil society groups and volunteers have joined the initiative to help raise awareness, disinfect public spaces and promote protective measures such as wearing masks, staying at a distance, and ensuring hygiene among civilians, especially in displacement camps.

A White Helmet volunteer raising awareness to protect civilians from coronavirus in a camp in northern Idlib - Photo credit: The White Helmets

Several civil society groups and volunteers have joined the initiative to help raise awareness, disinfect public spaces and promote protective measures such as wearing masks, staying at a distance, and ensuring hygiene among civilians, especially in displacement camps

After weeks of denial, the Syrian regime declared the first case of COVID-19 in its areas of control in late March. Many Syrian activists and groups including two women-led movements, Families for Freedom and Caesar Families Association, started calling on the international community to take real action and pressure the Syrian regime to immediately release the 100,000 detainees and forcibly disappeared from its prisons. If an outbreak of coronavirus were to extend into Assad’s dungeons, thousands of lives would be put at risk, and the impact could be catastrophic.

In June, Meyasa Mohamed, an activist and member of Families For Freedom, organised a demonstration in Idlib, holding the photo of her husband who disappeared in the regime’s prisons eight years ago. She and other families stood next to a mural of a destroyed building by the artist Abu Malek al-Shami (known as ‘Syria’s Banksy’) demanding justice and freedom for their loved ones and all detainees.

If an outbreak of coronavirus were to extend into Assad’s dungeons, thousands of lives would be put at risk, and the impact could be catastrophic

Solidarity at its finest

When artists Aziz Asmar and Anis Hamdoun saw the heart-breaking video of George Floyd suffocating to death as a white policeman knelt on his neck, it brought too many painful memories of what they and so many Syrians have been through when the Assad regime used chemical weapons to attack its own people.

Aziz and Anis used their art to send a beautiful message of solidarity to the Black Lives Matter movement, by drawing a mural of Floyd on a bombed wall in Binnish, Idlib. The mural put Idlib and the plight of its people on the news again and was covered by every media outlet around the world. 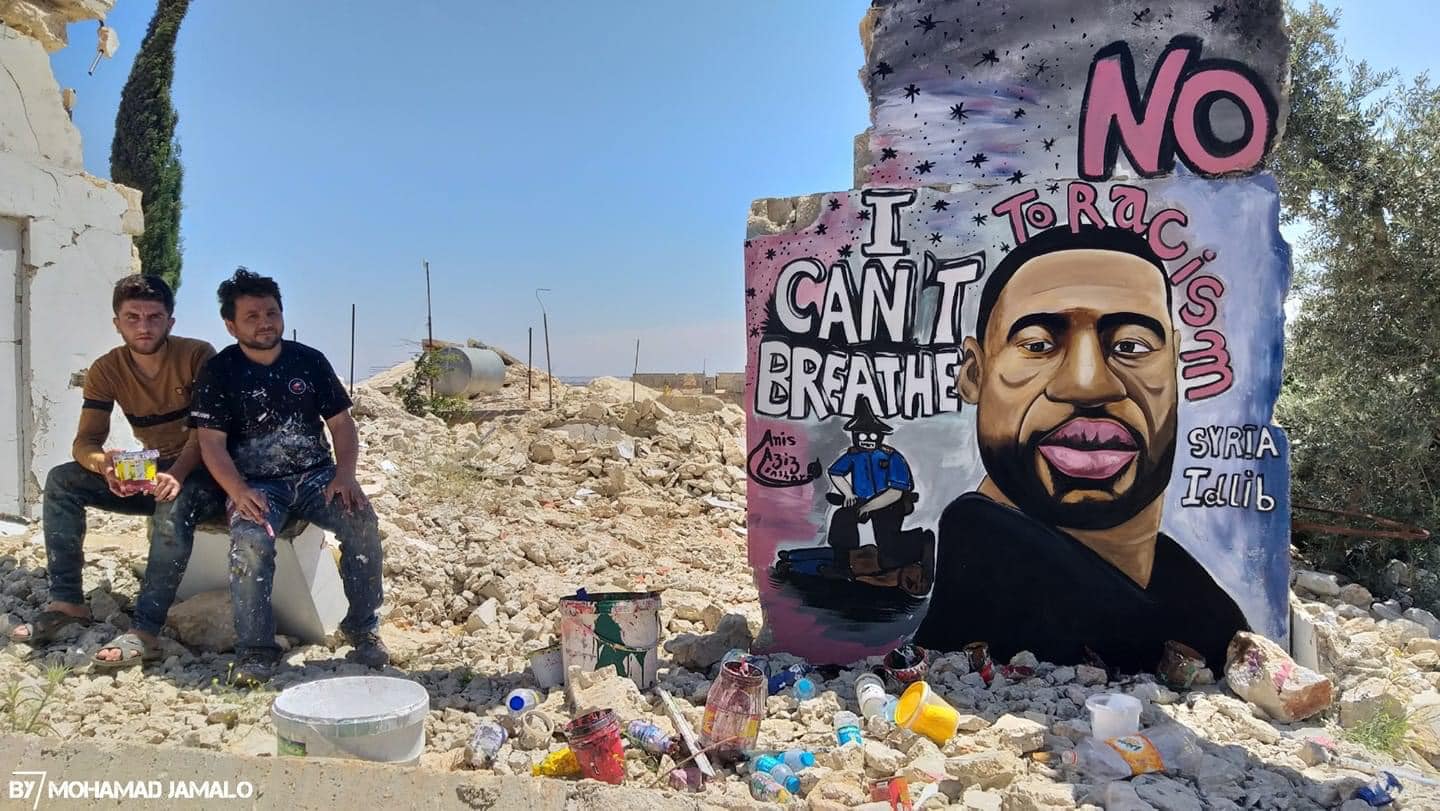 Aziz and Anis used their art to send a beautiful message of solidarity to the Black Lives Matter movement, by drawing a mural of Floyd on a bombed wall in Binnish, Idlib

The international community and leading actors in Syria must realise that without a strong local civil society, civilians in Syria will continue to suffer, thus they should take real actions to stop bombardment, release detainees and support civil society with all means necessary to thrive. More must be done to stand up for the most vulnerable, and protect communities already affected by violent conflict. In this time of global uncertainty, we must defend the groups that are hard to reach, and the communities that too often fall through the cracks.