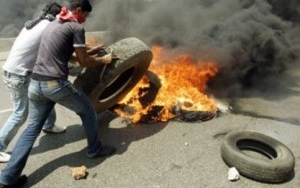 Peace Direct runs Insight on Conflict and this newsletter as a resource for anyone interested in the work of civil society and peacebuilders in parts of the world affected by conflict. If you also find this service useful in your professional life in academic research, policy, practice or philanthropy, please help us to keep the show on the road by making a donation.

Local First is an approach to international development that prioritises the views and leadership of people and organisations in the countries affected, over those of outsiders from the international community. The campaign had it's UK launch this month.

The Usalama Project, from the Rift Valley Institute, seeks to provide in depth information about the conflict in Eastern DR Congo. Over the next year the project will produce a series of reports on the conflicts an parties involved. The first two reports are From CNDP to M23: The Evolution of an Armed Movement in the Eastern Congo and North Kivu: The Background to Conflict in North Kivu Province of the Eastern Congo.

Demobilisation and disarmament in peace processes

Demobilisation and disarmament in peace processes, from NOREF, is a short policy brief on the circumstances in which armed groups agree to demobilise and disarm. The paper offers recommendations to mediators and peacebuilders.

As broader peace efforts have faltered, interest has increased in the capacity of local communities in Darfur to regulate conflict in their midst.

Traditional authorities’ peacemaking role in Darfur, from USIP, examines the role of traditional justice mechanisms and traditional leaders in conflict resolution in Darfur.

Crisis management and conflict prevention in Eastern Europe and the Balkans: Lessons for Ukraine-EU Cooperation

[This book] contributes to the debate on reinforcing the European Union’s crisis management and emergency response capabilities, offering a genuinely comparative approach and focusing on the evolving ability of the Union to respond to emergencies and disasters through more effective  institutional and cross border cooperation.

In fragile states, even more than elsewhere, civil society matters. But the shape and form it takes differs widely and that variation needs to be taken seriously if civil society is to play its important role in contributing to a transition out of fragility.

Post-2015 debate must include voices from the front line

Lord Jack McConnell argues that the Millennium Development Goals have largely ignored the link between conflict, development and peacebuilding. Whatever replaces them in 2015 must address conflict and include local voices. Read more »

How can young people break cycles of violence in Burundi?

With the celebration of fifty years of independence for Burundi, a number of youth-orientated organisations question why young people are still being manipulated and forced to repeat the atrocities of former years. There is a deep sense of frustration that young people are not heeding the lessons of history, and anger that the political powers are still manipulating the young people of Burundi. Read more »

Is this the calm before the storm for Lebanon?

The Syrian civil war has had a devastating impact on the Syrian people, and now many worry that the conflict may travel across the border to Lebanon. Increasing violence in Lebanon, political impotence on the matter and a growing Syrian refugee population are adding to a problem that looks more than ever like a ticking time bomb. Read more »

Imported from Detroit: the emergence of Alternative Dispute Resolution

Detroit has gained an unenviable reputation in recent decades for a combination urban decline and high levels of violence. But despite this negative reputation, Detroit’s suburbs are emerging as hubs of innovation in the field of alternative dispute resolution field (ADR). Read more »

Global call to action to stop the violence in Israel-Palestine

Kai Brand-Jacobsen, Director of Department of Peace Operations (DPO) – PATRIR, gives immediate actions you can take to help bring about an end to fighting and create the conditions for a just peace for all the people of Israel-­Palestine Read more »

Otim Denis Barnabas, Ugandan peacebuilding organisation, the Refugee Law Project, discusses land disputes in the Amuru district of Uganda. The return of displaced people after the LRA conflict, and the discovery of oil and other minerals, have led to simmering tensions and conflict. Read more »

Political peace in Jammu and Kashmir

The ‘Panchayat’ elections were an exercise in grassroots democracy in Jammu and Kashmir. Intended to promote restore trust in politics and create a constituency for peace, the process as has led to dissatisfaction, anger and protest. Ashima Kaul, Insight on Conflict’s Local Correspondent for Kashmir, explains. Read more »

Whilst sectarian violence is rife within Pakistan, it is often misrepresented as terrorism. This is causing the issue to go undiagnosed and thus resources are not adequately directed to cure the problem. Zahid Shahab Ahmed explores the issue of sectarian violence within the city of Gilgit-Baltistan in the north of Pakistan. Read more »