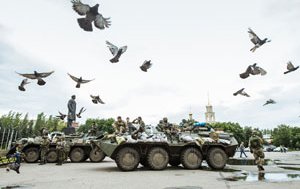 Behind closed doors: The risk of denying women a voice in determining Afghanistan's future

The Afghan Government and the international community must ensure the rhetoric on women’s rights matches the reality. This means supporting women’s meaningful participation in all peace process initiatives, including through sustained support for women’s organizations and for women’s capacity building to take part in high-level negotiations.

Behind closed doors, from Oxfam, looks at the role of women in the Afghan peace process. Although women’s rights in Afghanistan have greatly advanced in recent years, there are worrying signs that advances are being rolled back, impacting the ability for women to take part in the country’s peace process.

Despite the stalling of the formal dialogue, Bahrain’s traditionally active civil society could make a valuable contribution to sincere efforts to reach a political resolution – if, that is, it were given the political space to do so.

Bahrain: civil society and political imagination, from Chatham House, examines how civil society may be key to providing a new political settlement in Bahrain. This is essential if the grievances that led to protests in recent years are to be resolved.

Masculinities, conflict and peacebuilding: perspectives on men through a gender lens

The latest edition of Conflict Trends, from Accord, includes articles looking at IT and peacebuilding in Kenya, local peace committees, and the role of agriculture in peacebuilding.

Back to the future in Burkina Faso

Habits, practices and routines: the everyday politics of International Intervention

By Jasmine Mitchell: Listen to Séverine Autesserre discuss the findings of her new book, ‘Peaceland: Conflict Resolution and the Everyday Politics of International Intervention’Read more »

Conflict in Ukraine: Evidencing the need for local intervention

By Richard Reed: As the conflict in Ukraine shows worrying signs of further escalation, Richard Reed argues for the need to support local efforts to build peace. Read more »

Overcoming the stigma of sexual violence in Bosnia-Herzegovina

By Tim Bidey: Today is the start of week of action to raise awareness of the prevention and consequences of sexual violence in conflict. Read more »

Horn of Africa: the linkages between food insecurity, migration and conflict

Lebanon, land of dialogue and opportunity

By Sawssan Abou-Zahr: A new initiative aims to harness Lebanon’s diversity in order to bring people together. Read more »