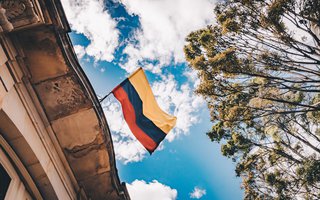 Violence continues during the World Cup

As people watched the football match unfold, a short audio clip no longer than 3 minutes was being shared on different social platforms. The clip was a conversation between a man and a woman, a teacher from a small municipality called San Pablo, in the south of Bolívar province. In the clip, the woman is being threatened, and told to “pick up her belongings” and leave town if she wants to stay alive. The woman explains “I’m only a teacher working in a small school, I’m not causing any harm.” The man insists that she must leave the region, otherwise he will kill her, as “in this region we kill whoever we want to”. Even when the woman describes the suffering she has experienced as a victim of war and violence, the man is indifferent, telling her that he will tell her superiors that they will have to pick up her body if she does not get out from town soon. You can feel her fear even though she tries to sound calm and strong in front of her aggressor. It may sound like something from a horror movie, yet sadly the clip was not fake news. It was a real conversation between a paramilitary leader from San Pablo, and a teacher called Deyanira Ballestas who was being threatened. As this article is being written, the fate of Deyanira remains unknown; and the audio clip she was heard in sheds light on the intimidation and the incitement of terror being carried out by paramilitary groups.

Since 2016, when the peace agreement between FARC and the government was signed, 282 social leaders have been murdered

The same day the audio was released, more violence was perpetrated across Colombia: the massacre of seven people in Argelia, Cauca[1], the killing of a female social leader from Chocó, and the shooting of another social leader in Atlántico province. In the last instance, this took place while he was watching the football match England Vs Colombia at home[2]. What we do know for sure is that during 2018, 98 social leaders, peacebuilders and human rights defenders have been killed and political leaders have talked about 19 social leaders killed during the last eight days[3]. Since 2016, when the peace agreement between FARC and the government was signed, 282 social leaders have been murdered[4].

A group forgotten by all

When social leaders are supporting land restitution processes that benefit victims of armed conflict, the voluntary substitution of illicit crops and the promoting the implementation of the peace agreement, it’s easy to see why they are often the targets of illegal armed groups or criminal organisations[5]. The Colombian government may have recognised security and protection as being one of the biggest challenges Colombia is facing; yet state presence is still not limited, and investigations about the crimes against social leaders and human rights defenders are not conclusive. There is also a lack of political will to establish who is responsible for those crimes and to identify any sort of pattern to their occurrence[6].

Being a social leader in Colombia is a nightmare, that is for sure. Not because of the fact they may be killed at any time, or because they must deal with the sort of phone calls Deyanira experienced on a daily basis, but because citizens are totally indifferent to those murders. Many feel that the people in Colombia do not care at all about the key role social leaders plays in the most vulnerable regions of the country; there is no sense of respect for their sacrifice and their work. Most disappointingly, most people believe social leaders are being killed because they are interfering on issues that are not their business, and they are upsetting the wrong people. With this logic, the numbers of social leaders killed will continue to increase. The government in Colombia is about to change and under the new government, social leaders’ protection and security has not been identified as an issue at all, not during the campaign and not now: on the 3rdof July the focus of the social media activity of the incoming political party was about the football match; not a word was said about the social leaders killed nor the disturbing audio clip.

Being a social leader in Colombia is a nightmare, that is for sure

International and civil society organisations, as well as the international community represented by the United Nations, may be aware of this critical situation that is seeing Colombia lose its social leaders[7], yet making the life of our social leaders matter to the whole of society remains a challenge. By today, thousands of Colombians using social media will probably know that Deyanira´s life is under threat, although not many people will do anything about it. If by tomorrow it is reported that Deyanira has been killed, many people will look the other way.

A cry for change

This article hopes to be a shout, a cry, an exclamation to people around the world, to encourage Colombia to protect its social leaders and peacebuilders by raising awareness of the risks they are facing in Colombia every single day because wider society is not protecting them. We cannot talk about peacebuilding unless society cares about its past and cares about its present, and the fate of those who work for their communities and their rights. It is useless to insist on a peaceful society if people still believe it is normal for some people to die if they think or act differently, or if they were upsetting the wrong people. We need the support of global peacebuilders to defeat and denounce violence against our social leaders, and to tackle the indifference with the rest of our society to respond to these unfortunate events. Hopefully through mobilisation, articles like this one and by making a lot of noise, we can change the end of this horror story and somehow, save the lives of Deyanira and those like her.

Transitional justice and reconciliation Human rights Dialogue and mediation
Disclaimer: The views expressed in this article are those of the author and do not represent the views or position of Peace Direct.