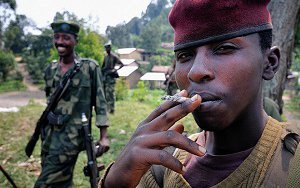 My name is Maguy Libebele. I was born and raised in the Democratic Republic of Congo. I graduated in IT and have several certificates in journalism and communication, women’s rights, election processes and peaceful conflict resolution in the Great Lakes region. Among other work I have experience in field reporting, training journalists and producing articles and broadcasts on peaceful conflict resolution. In particular, I have worked on issues involving women’s rights and female journalists. I have also worked on projects with several different NGOs, including Development and Peace, Panos Paris, Search for Common Ground, Radio France International, UNICEF, Syfia International, Journalists for Human Rights and the UN's Monusco mission.

Training young people in the DRC should be a key priority
In the last decades, multiple wars and political instability in the Democratic Republic of Congo have delayed the growth of economic and social development in the country. It has also had a negative impact on peacebuilding, especially in the east. Nevertheless, thanks to the help of external donors, my country is benefiting from a period of relative peace after the signing of several peace agreements; hope is growing, even if there are still pockets of resistance.

However, despite this relative stability, the Democratic Republic of Congo is still facing conflicts between communities, and pre-election violence and killings, especially in the border regions. The causes of these conflicts are mainly due to the access and control of natural resources among different armed groups.

In addition, the impact of the crises in Rwanda, Central African Republic, Uganda and Sudan has affected the already fragile situation of several communities and has worsened the conflicts among them.

In this fragile security context, training young people and Congolese citizens in the management and peaceful resolution of conflicts in the coming electoral year should remain a key priority in our country. Among youth it is essential, at the same time, to target the marginalised and unemployed, and those displaced by war.

There are other issues to worry about - as well as those which give hope - in DR Congo. These issues include:

I am very happy to start my work on these and other issues with Insight on Conflict. As the new local correspondent in DRC I am keen to start researching peacebuilding groups working to solve these problems and other conflicts in the country.

Moreover, I will try to explore a range of topics and to publish articles on the impact of terrorism in Béni, as well as the efforts made by civil society in the prevention of conflicts and the issues above - especially those of religious and traditional authorities. The challenges of peacebuilding on DRC are numerous and diversified, but if people work together they can be successful.

Thanks for translation assistance on this page to Giada Trucco.

Maguy Libebele is Peace Insight’s Congolese Local Peacebuilding Expert. A journalist with wide experience in the Great Lakes area, she is a correspondent for Syfia Grands Lacs, and reports in particular on women’s rights issues. She has worked on peacebuilding projects around the region with the UN, national and international NGOs.
Read more from Maguy Libebele 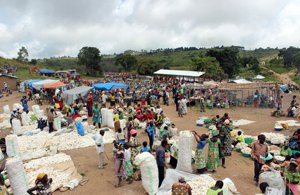 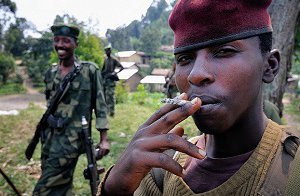