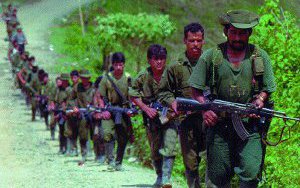 We are facing a dilemma in which the issues at stake on the negotiation table are central to the conflict in Colombia, yet remain beyond the reach of any agreement that can be achieved between the parties.
Assessing the role of coca and cocaine and the illegal drugs market is as complicated as assessing the history of the Colombian conflict and violence. The origins of violence transcend the existence of coca and cocaine; however, the nature of the conflict today cannot be assessed without considering the effect that drug production and trafficking has on the conflict. The existence of coca and cocaine changed the dynamics of the conflict - providing warring factions with resources to escalate their actions and undermine the presence of the state. Dealing with this issue is essential in order to ensure a long lasting peace in Colombia.

The presence of illegal drug trafficking and production has affected the capacity of the Colombian state to secure its presence through its territory. The conflict and violence in Colombia existed prior to the arrival of poppy, coca and marijuana fields. One element has been central to the different types of violence: the weakness of the Colombian state. The difficulty in guaranteeing the monopoly of violence through the state apparatus, the absence of an efficient judicial system and the (lack of) credibility of the state in different regions reflects a failure of the Colombian state, and is more salient in the areas where conflict and illicit crops flourish.

The weakness of the Colombian state

When the state has achieved success or a strong presence in one of these aspects, this has not corresponded to success in the others. In provinces where the military presence of the state is strong, the capacity of the judicial system and the credibility of the state might be weak/limited. Where the state has not established any significant presence in the past, it is foolish to believe that the mere presence of soldiers and police officers will fill the gap (regarding the absence of institutions from the judiciary and the legitimacy of the state) for the population just because they are now there.

In the areas where coca is grown and where cocaine is produced, the capacity of the judiciary to impart equitable justice is limited, the presence of the police and military forces is limited in practice:  institutions might have presence, but the enforcement of their decisions is limited or unfeasible in the context of the social arrangements in place.  The government has intervened strongly against the production of drugs, but has not been able to eradicate drugs as a central element within the economy.

The link between drugs and violence

In the areas where coca is grown the absence of the state is clear; coca growers usually look to grow and transform coca into cocaine along the borderline of the agrarian frontier of the country. In these contexts the presence of alternative social orders is more likely. Where the Colombian state is weak, illicit crops, private armies, paramilitaries, warlords and guerrillas are more likely to be present. It is impossible to avoid the relationship between armed groups and drugs within these contexts.

It is in this context that the FARC and the government are negotiating on the role of drug trafficking and illicit crops in Colombia as part of the ongoing peace talks. Some of the items under negotiation include:

The number of elements on the table for negotiation points to the extent to which illicit crops and  drug trafficking are related with the violence, either as a fuel, or as a reason for the conflict. Not only this, it is an agenda that is not limited by the boundaries of Colombia and transcends the borders of the country, involving the region and the hemisphere.

The supply chain of drug trafficking is one that originates in remote rural areas and ends in export to other countries. As in every supply chain the transit of materials happens in both directions: as drugs go to the markets, goods come in compensation to the producers. It is important to note that in the case of drug trafficking the biggest share of the profit is not held by the local traffickers and exporters, but is located in the metropolis in the northern hemisphere where the price of cocaine is up to 100 times higher than in the rural areas of Colombia.

As the coca and cocaine is not only produced in the areas where the FARC has presence, it is naïve to believe that the peace process will dramatically affect the production of drugs in areas outside of the FARC’s influence. Peasants producing illicit crops are a highly mobile population and might change their areas of residence/production. Additionally, the areas where crops are grown are typically without infrastructure and, in some cases, in unfertile terrains where the creation of an economy based on legal crops might not be economically sustainable or even feasible. Furthermore, undersigning agreements on the national drugs policy against illicit crops may be pointless: trying to regulate a market within a country when the actions of other actors (outside of the country) impact the market is likely to be a fruitless endeavor.

The most contentious issues being debated are the role of other armed groups involved in the drug trafficking (the private armies of drug traffickers), and the de-militarization of the counter narcotics policies. Both of these will prove to be challenging to negotiate. The former is made difficult by the fact that paramilitaries and other armed groups are not subservient to the government, and may have interests in disrupting the negotiations. The latter is made complicated by the fact that demilitarizing one of the most successful policies of the government against the FARC (the use of military hardware from the Plan Colombia designated initially to counter narcotics policies against the FARC) might revamp fears of the FARC using the peace process as a way to strengthen their position.

We are facing a dilemma in which the issues at stake on the negotiation table are central to the conflict in Colombia, yet remain beyond the reach of any agreement that can be achieved between the parties. It might be the case that they are hoping to cover the sun with their fingers.