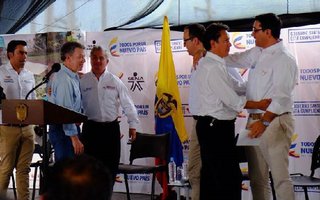 Colombian President Juan Manuel Santos with representatives of the FARC armed group. Image credit: TDA.
Colombia has seen a dramatic fall in violence since peace talks restarted in September 2012
Among the crowd at a recent event at a Servicio Nacional de Aprendizaje (SENA) a training centre were victims of Colombia’s 60-year-old conflict. Colombian President Juan Manuel Santos declared to them that "Peace starts from the heart, at work and in the classrooms".

In an act of public reconciliation, Santos "stressed the importance of developing the country for peace" with "public services in education, training, health and employment".

He described SENA as "the jewel in the crown of the government," having "lowered the rate of unemployment by 8.9% [in selected regions]," and said that it would be the government's first priority.

Colombia has seen a dramatic fall in violence since peace talks restarted in September 2012. But in spite of the ceasefire in place, Santos' approval ratings have dropped almost 50 per cent since he took office in 2011, suggesting that his policies may not be popular among all Colombians.

He has prioritised the 23 March Peace Agreement deadline in contrast to his predecessor or "former boss". As head of Colombia’s rightist opposition, Senator and former President Álvaro Uribe wrote in response to the Settlement on Victims Accord 15 December 2015 "substitutes Colombian justice in order to absolve the FARC."

On the podium, Santos was surrounded by members of FARC representatives, including Roberto Sáenz, the late brother of Guillermo Sáenz, better known by his nom de guerre, Alfonso Cano.

"Studies have found that hugging releases toxins, helps you sleep better and increases the levels of oxytocin that produce feelings of affection and forgiveness..." Santos cited an Australian Scientific Journal in an unprecedented and perhaps, unusual reference for a politician.

In recognition of his culpability, Santos as head of state and former Minister of Defence is responsible for commanding many operations against Guerrilla units.

"Now, I want you all to hug the person next to you," Santos instructed the audience. The mood turned into jubilation as the crowds embraced each other to the sound of a brass band.

Cano spearheaded some of the most violent campaigns against the government including kidnappings and attacks against government forces, and played a key role in the operations of FARC leadership. His death did not produce any justice for victims nor did it end the vicious cycle of violence when replaced by his second in command. Attacks against guerrillas have done little to disrupt the effectiveness of criminal organisations’ operations.

Worse, under Uribe’s administration, enabling right-wing paramilitaries resulted in more casualties through unlawful force by using the defence budget to incentivise the killing of 'enemy combatants'.

Fear of ‘Non-Colombian’ transitional justice rattles those who played a key part in the war. On the other side, human rights groups are concerned about impunity for perpetrators. The Justice and Peace Law passed in 2005 allows for reduced sentences without requiring full and truthful confessions, and nor does it oblige wealthy paramilitary leaders to compensate victims.

Peace in a nutshell

The government led by Santos is trying hard to strike a deal with the largest active Guerrilla force, the FARC. Meanwhile, national programmes are designed to ensure education and development for ex-combatants including language training at Public SENA centers.

The "burden is on this generation" to transform the country into a more outward-looking state with enough talent and skills to rebuild the country and prevent a repetition of past failed peace talks.

Without doubt, there is a risk that long-lasting peace may not be achieved due to external factors such as the pressure from drug traffickers together with the United State’s foreign policies that target cartels, paramilitaries and militant groups such as FARC. The US decides to tar all such groups under the same 'narco-terrorist' brush and maintains their international arrest warrants for key interlocutors in the negotiations.

Any new 'democratically elected' government beyond Santos could reverse the fate of any ex-combatant until legal certainty is achieved and the negotiations are finalised.

If transforming FARC into a legitimate political party proposed over 30 years ago succeeds then we may see some division in the ruling elite that have led Colombia’s Liberal-Conservative governments. Another risk is the formation of more armed non-state actors, which draws parallels to Colombia’s violent history in the 80’s and 90’s with the rise of Escobar’s cartels and paramilitarism. More recently, many of the 27,000 AUC guerrilas demobilised between 2003-2006 went on to join criminal groups that continue to control the drug trade through their use of violence and ability to influence politicians.

The fate of FARC

Santos seems confident that peace is no longer a dirty word
The fall of the Soviet Union demoralised and dented FARC’s capabilities in the 1990s, while the economic woes and leadership of Cuba and Venezuela continue to undermine left-wing guerrilla movements. We will not witness a disbanding of FARC or any other guerrilla group until its sources of ‘illegal income’ are stopped or reduced. Re-capture of land for coca cultivation and illegal mining will meet armed resistance if no political deal fully covers such issues on a case-by-case basis.

Part of the battle is trying to convince the people, especially the younger generation, that a peaceful Colombia is a prosperous Colombia. Santos seems confident that peace is no longer a dirty word and will be effective in 2016 with bolstered institutions and armed forces ready to fill the vacuum in more remote areas.

Peace in our time?

Confidence in governmental institutions including SENA may be the "first step” towards “long-lasting peace". The government is investing heavily in its people by recruiting foreign teachers to make a "Bilingual Colombia" to ensure that "SENA centers can serve society in every community". Not only in the privileged areas of Antioquia, Bogota and Cartegena but in Tolima, Cauca and Choco departments where security risks make development extremely perilous and slow.

Santos has a vision of peace and is willing to embrace his foes – quite literally. There is always a chance for redemption and forgiveness, even if other right-wing elements and some victims of the conflict appear to view the Peace Agreement as a pact with the devil. 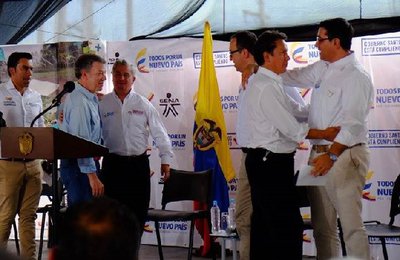