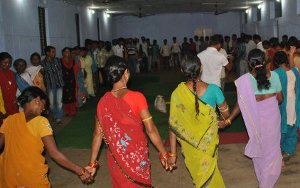 Access to forest land and produce, water and other natural resources plays a critical role in the livelihood of the tribal people of India. However, instead of nurturing tribal livelihood, developmental interventions in India have often resulted in the curtailment of tribal people’s access to traditional sources of livelihood.

In the state of Odisha, on the subcontinent's east coast, the situation is further complicated by the presence of militant naxalite cadres. The naxalites are considered far-left radical communists, supportive of Maoist political sentiment and ideology. Most are armed, with sporadic armed attacks a constant feature of life in Odisha (formerly known as Orissa).

It is in this challenging environment that the Folk School of Koraput, a charitable trust, was established in April 2011 to assist with the development of neglected indigenous tribal people of Koraput. The district forms part of the so-called tribal belt in southern Odisha. Most of the area was under thick forest cover until a few decades ago. However, largely due to deforestation, industrialisation and urbanisation the traditional way of life of tribal people has been disrupted.

The presence of naxalite groups in the area creates a lot of problems for organisations like Folk School:

Historically, the two principle areas where tribal people need most support are the development of organisational skills and empowerment. As with indigenous people the world over, they face the additional problem of land alienation and displacement. It’s a well-known fact that access to forest land and forest produce plays a critical role in the livelihood of the tribal people. However, instead of nurturing tribal livelihood, developmental interventions in India have mainly resulted in restricting tribal people’s access to traditional sources of livelihood, according to the Indian Institute of Public Administration and Chronic Poverty Research Centre.

The danger of losing sight of peace

A critical review of major tribal policies and programmes of the state of Odisha shows that the various developmental policies of the state have had a negative impact on tribal people’s access to and structure of livelihood. Land is not only a matter of livelihood for the tribal people of Koraput. It is also a matter of dignity - not just a piece of paper which is transferred from generation to generation. Land is at the heart of the economic, social and cultural way of tribal life, with more than 70 per cent of tribal people in Odisha depending on land and allied activities for their livelihood.

Because of the ongoing problem with naxalite groups, various organs of the state in the region have deployed over 20,000 security personnel. This has resulted in additional problems such as the illegal detention of tribal peoples, and a hitherto unreported spate of sexual crimes committed by security force members. As development workers our lives have been made very difficult as we feel sandwiched between the naxalites, on the one hand, and the state on the other. Unfortunately, these problems are all too common for those of us working with tribal people. However, we still do our best to cultivate a space which allows tribal people to voice dissent in a peaceful way, while at the same time facilitating negotiations with those in authority. There’s a constant danger though that peace will be lost in the process.

I once asked a tribal person what peace meant to him, to which he replied: “If our natural world is kept healthy, and not exploited for profit then we’ll all be healthy and happy. It is our duty to preserve our natural resources for future generations. This is peace for us.” Such a simple answer, yet displaying a comprehensive and deep understanding of what is meant by peace – a concept linked to justice, development and rights for all. At Folk School we believe that the development model we use can only be justified when it gives priority to the cause of local tribal people. In other words, a model underpinned by a true spirit of justice, rights and peace.

The above triangle shows how peace is at the heart of Folk School’s training programme: peace is equidistant from the three major components of development, rights, and justice. If we want to succeed at development then, equally, people must benefit from justice and they should have equal rights. If one particular section of society is unhappy and doesn’t receive justice it will create social tensions which will ultimately lead to prolonged conflict. Development is an inevitable part of human evolution but it should not be at the cost of rights and justice, otherwise peace will not prevail. This is the crux of the problem which the tribal people of Koraput face: They’re caught between the naxal conflict and a definition of development prescribed by the state.

Folk School’s training programme is geared towards empowering tribal people. It aims to stimulate people’s minds, which then leads to reflection so that participants end up analysing their own situations and come up with solutions. First we want the training to help the individual, then the group and ultimately the community. We call it training for change and transformation.

Core principle is not to make profit

As for the future, we are hoping to raise sufficient funds to build a training and learning centre for the tribal people of Odisha. The plan is for the centre to be managed by local tribal people and not by us.

For more information about the Folk School of Koraput, please email: folkschoolkoraput@gmail.com

Development Environmental peacebuilding
Disclaimer: The views expressed in this article are those of the author and do not represent the views or position of Peace Direct.

More on Development and Environmental peacebuilding → 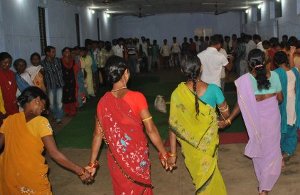