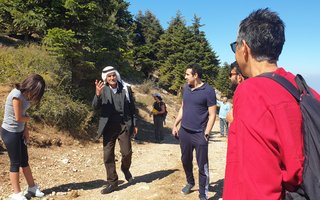 Photo by the Environment Academy

Environmental security was never a priority in the post-civil war era in Lebanon. There was no holistic approach to waste management, nor any strategic planning on how to govern natural resources or manage the pollution suffocating Beirut and other cities due to chronic electricity cuts. We are dependent on the power produced by private generators run by an influential cartel linked to political tycoons. They own our neighborhoods; literally; turning them into segregated blocks where no one crosses the boundaries of another. You cannot change your energy provider if you're dissatisfied with the service, whose costs increase monthly. The alternative is to live without electricity for 20 hours a day or shift to solar energy - an unaffordable option to many in Lebanon.

"The generators' emissions are life threatening; most citizens risk becoming cancer patients", Professor Najat Aoun Saliba told me. She’s an atmospheric chemist who received the L'Oréal-Unesco Women in Science award for Africa and the Arab States in 2019, and was voted among the 100 most influential women by the BBC.

Dr. Saliba is a revolutionary like no other. I would say her revolution is rational, while most of us, including myself, tend to act impulsively. Her revolution is well rooted in the know-how that science offers and the pursuit of justice. She says this is the constructive resistance and transformative change needed to achieve accountability, good governance and the preservation of scarce natural resources in places overcrowded by local communities and Syrian refugees.

On the larger scale, she rebukes the terminology "the Global North and South" which she sees as insulting. "This classification is an expression that is counter to peace. Ironically, climate change is more inclusive", she says, suggesting that it is an issue that excludes no one. Could such inclusivity lead to some justice, I asked. She answered that it would increase inequality and insecurity. For instance, our region the Middle East is warming at twice the global average; meaning more people will be forced to leave to where food and water sources are more reliable. Will there be environmental migrants, I asked? "Those people freezing in the wild seeking a safe haven in Europe are in fact environmental refugees. Economic migration is environmental migration", Saliba replied.

For instance, our region the Middle East is warming at twice the global average; meaning more people will be forced to leave to where food and water sources are more reliable

I have been wondering how the pandemic would affect peacebuilding when we witness the end of it. Saliba stated that environmental peacebuilding is needed more than ever to overcome how COVID-19 has changed life as we know it. She argued that as most countries are easing lockdown restrictions and allowing citizens and tourists to be mask-free in open spaces, people would realize the need for fresh air and green spaces. "If the pandemic taught humanity something, it is that we need a balanced, safe and sound environment to survive. Saving the environment means avoiding other pandemic surges and fights over scarce natural resources. Saving the environment means preserving lives and pushes for peace".

When asked if science could support peacebuilding, she was sure of it: "Definitely. You just provide the proof and evidence; they can help bridge religious and political rifts. Science has no color or sect, and neither does climate change". However, Saliba thinks international donors in these fields are generally lacking sensitivity to local contexts. She explains how aid agencies had poured a lot of money into Lebanon, including in the waste management field, without thinking through the next steps necessary to address the situation. There were no implementation plans, follow ups, auditing, monitoring or evaluation. She notes that donors became stricter after the country's severe economic collapse, pushing for quick results as well as tangible indicators; and their objectives remain prioritized in immediate, short-term relief. Although they support the shift to a green economy at the government and business levels, they won’t invest in long term environmental goals such as improving health and producing organic harvests.

"Our own activism will save us, not foreign funds", says Saliba. She believes that the 2015 protests in Lebanon were an angry movement lacking a plan and alternative approaches and solutions. Demonstrations are never enough without a long-term strategy to mass mobilization. The Environment Academy is her revolution based on grassroots empowerment to achieve transformative change and climate justice via science and non-violence. This project, in its second iteration, embodies the partnership between academic mentorship, the media, and local actors. The most prestigious university in Lebanon, a major television network and communities themselves have joined together with a common aim. The latter identify the environmental problem in their area, present proposals and attend workshops. Projects to be supervised by the Academy are selected by experts from the Lebanese diaspora in soil biophysics, atmospheric sciences, waste management, wastewater treatment, forest and wildfire management, and related fields.

Here too, Saliba criticizes the donors, including some UN agencies, who are imposing the inclusion of Syrian refugees in projects regardless of the local context. As she puts it, the money is targeting refugees and the host communities are secondary beneficiaries.

On the contrary, the Environment Academy leaves it to the local teams to choose their representatives. It has adopted projects in areas accommodating refugees despite scarce natural resources, mainly water, and increased waste production. Saliba admits that while some villages refused to collaborate with refugees, others changed their perceptions of them because they actively embraced recycling. Data collected proved that problems were not caused by refugees. In fact, many of them attended the lectures and expressed interest in implementing their acquired environmental knowledge back home in Syria. Saliba explains that a successful solution is not purely technical but based on "a deep understanding of the local social fabric". Isn't that peacebuilding and conflict resolution at their best?

Saliba explains that a successful solution is not purely technical but based on "a deep understanding of the local social fabric". Isn't that peacebuilding and conflict resolution at their best?

A project adopted by the Academy helped end old tensions between two villages dating back to the civil war because of a sorting facility polluting a common river. In Saliba's words, "we launched an open discussion, a link to overcome a history of miscommunication".

The Academy is also a tool for women's empowerment, especially in small communities neglected by governmental agencies. For instance, at a village that didn't have a municipality, a housewife led a team of three, comprised of her daughter and son. Saliba tells me the woman became "the star" of her town. Her project in waste characterization and management was successfully implemented and had a domino effect in the surrounding area. I went with the Environment Academy on a field trip to a neighboring village and attended the meeting between Saliba and her dynamic co workers, the mentor and the local team operating on solid waste and forest fire managements. I was impressed by the degree of scientific awareness of the town's team, composed mainly of women, and how keen the Environment Academy staff were to achieving the goal with minimal expenses, all generated from private donations collected with high transparency.

Saliba's environmental revolution will ultimately achieve ‘accountability’. She tells me that the projects end with a social contract between the community and the respective municipality. It is a pressing tool, though not legally binding. Accountability starts at this grassroots level, and will eventually build up on the national scale, especially in the upcoming general elections.

In her view, environmental peacebuilding can bring people together, particularly in turbulent contexts like Lebanon, because it relies on science "where we always have a plan B", in contrast to public management in our country which has lacked strategic planning since the 1970s. In a post conflict situation like ours, good governance is needed to protect the environmental infrastructure. People would learn by practice to be climate resilient through best use of land, and to avoid conflict over water, among themselves and with refugees, therefore using science to work for peace and security.

In her view, environmental peacebuilding can bring people together, particularly in turbulent contexts like Lebanon, because it relies on science "where we always have a plan B"

I believe in environmental peacebuilding because it is a bottom-up process to achieve national cohesion, and to include refugees and marginalized rural communities, including women whose involvement in agriculture and wise water use can dismantle the grips of social patriarchy.

Environmental peacebuilding empowers the masses with knowledge and critical thinking, leading to justice and accountability. Saliba asks me: "Isn't that a constructive resistance, transformative change, political activism, a revolution?". Yes professor, indeed it is!