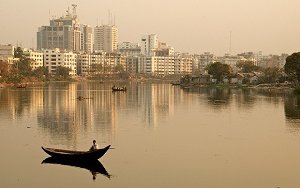 Image credit: Santiago S.V.
In discussion with local researchers Gazi Asif, Shahriar Pamir, and a third commentator, our Bangladesh Local Peacebuilding Expert explores some of the issues relating to violent extremism in Bangladesh. Some of their answers have been grouped.

What are the key security threats in Bangladesh?

Blogging receives an ambiguous response from the most people. Why do we blog? We blog to express free thinking. We debate on various topics. But now, whenever I express anything related to radicalisation or extremism, I receive different responses. If anyone praises my thoughs, at least two people emerge to throw diatribes at me. Sometimes this ends up in death threats. That’s not cool, is it?

What do you understand by “radicalisation and extremism”?

“Radicalisation” implies a belief in stringent perspectives. One can be radical in a sense of believing that an opinion is applicable in every aspect of a certain area, and undermining any other opinion. Radicals hardly adopt violence to strengthen their beliefs.

On the other side of the coin, extremism implies actions that will do anything to establish or strengthen beliefs. It might sound like extremists are the evil. But remember, if the extremists are fire, radicals are the wood in that fire. Not every radical is an extremist but every extremist is a radical.

Why do extremist groups resort to violence to achieve their goals?

They adopt violence to make people frightened. They believe violence can rip through the system causing havoc. Only by this they believe they can reach their goal.

What strategies are adopted by extremist groups to radicalise young minds?

First, they lure them in by chanting the words ‘Reward of Afterlife’ or ‘The Heaven’. These groups instill beliefs in youth that if they sacrifice themselves in “jihad” they will be granted rewards in the afterlife as martyrs. However, it’s also heard that these groups try to reach out to the poorer or jobless young people. They promise them a secure life and by doing so get these youths into their groups.

So do you think an effective poverty reduction strategy can lessen young people joining or supporting extremist groups?

Obviously! If such strategy is opted by the appropriate authority, recruitment in the extremist groups must be lessened to an appreciable extent.

What can religious institutions do to tackle the misinterpretation of religious scripts by extremist groups?

They can take a couple of certain steps. Religious leaders can arrange meetings for young people. They can arrange “speech sessions” where these religious leaders can deliver speeches regarding the dark sides of extremism through religious scripts. They can also keep a close eye on the movement of the “suspected” around these institutions so that necessary steps can be taken.

Do you think the emergence of radicalisation/extremism in Bangladesh has the potential for violent conflict in future?

Certainly this could be a possibility in the future. Agree or not, these groups are slowly and steadily moving, waiting for the ‘war’. They’ve been caught red-handed in the Hill Tracts where they were undergoing military training; they’re accused of arms smuggling. Currently on various online platforms their activities create suspicion regarding their “ultimate move”. I must say authority needs to take them pretty seriously before any mishap occurs.

What kind of long-term strategies should be undertaken by the government to deal with these issues?

First we need to think about our education system. Does it inspire youths to learn? Second, the government needs to reassess the system of madrassas. It might sound a bit harsh but it’s a proven fact that most of the extremists apprehended till date are from madrasa background. So the government needs to look into it. Political instability is another reason which propels these extremists to vigor. It is probably the toughest ask for the government to resolve, but if it is, or mitigated to some extent, extremism will be weakened.

Last October, Bangladesh’s chief justice Surendra Kumar Sinha said that terrorism has become a threat to "life, economy and and political as well as religious pluralism." Yes, there has been a sharp rise of terrorism in Bangladesh. But the Islamic Extremist Groups are not the number one security threat in this country. To me the main security threat of Bangladesh is misgovernance. Almost all the institutions run by the government are corrupted. There is manipulation of power and misuse of money. And this situation creates political violence, social unrest and discrimination. If we look back over the last two years in Bangladesh, 80 percent of security issues were political terrorism. There are very few Islamic extremist violent activities. Read part one here.