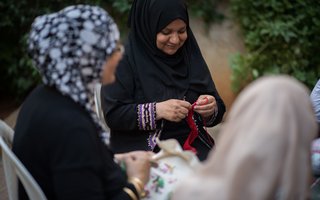 Some months ago, I accompanied an American colleague – an advocate for children's rights in conflict zones – to visit his friends in a Palestinian refugee camp in Northern Lebanon.

A female worker at an international agency met us to guide us inside (most camps are labyrinth like, and you would need a resident help you find your way). When asked about my work, I explained that my writings focus on peacebuilding, as well as women’s and refugees’ rights. She smiled and said: “Avoid using the words ‘peacebuilding’ and ‘feminism/women's rights’ as much as possible here”.

I was surprised for a moment, but quickly realised I shouldn't be. This wasn't the first time I witnessed an incident where these two concepts, peacebuilding and feminism, were viewed with suspicion.

I’ve heard objectors labelling them as Westernised, inherited from colonialism, and jeopardising the “Muslim values and family structures.”

"peacebuilding and feminism are not Westernised; they are universal, just like human rights."

The fact that some people are unsure of peacebuilding and feminism proves how much they are interrelated – perhaps more than peacebuilders and feminists are willing to admit. They both empower the marginalised, mainly women.

A knowledgeable and financially independent woman could be considered an uncontrollable force inside her patriarchal unit.

Patriarchy is a whole system of hierarchical multi-layered economic and political powers, which actually harms men too.

I would argue that peacebuilding and feminism are not Westernised; they are universal, just like human rights. Moreover, they evolve with practice and sensitivity to local contexts. And they are post- and anti-colonial.

Most importantly, they are not a threat to Islam, which preaches peace within and towards others.

In addition, my first encounters with feminism and early readings were not Simone De Beauvoir or Audré Lorde – both came later – but those of Fatema Mernissi, an iconic Moroccan scholar labelled as a founder of Islamic feminism.

Such feminism exists to empower Muslim women to shatter the glass ceiling, with tools from their religious and cultural heritage. I think it is an underrated concept, especially within the different feminist spheres, and not practiced enough by the women who need it most: activists and peacebuilders struggling for their rights in conservative environments in Iraq, Libya, Yemen, Iran and Afghanistan under the Taliban.

After Mernissi, I read Nawal El Saadawi, the rebellious Egyptian physician and writer who was imprisoned after embracing feminism from a socio-economic and political lens.

Patriarchy is also rooted in capitalism and economic monopolies, which marginalise the poor and indigenous populations, ethnic and religious minorities.

A few years ago, young feminists organised a large demonstration on International Women’s Day in Beirut. They demanded social justice that leaves no one behind and guarantees equal rights for underprivileged women, refugees, migrant workers and LGBTQ+ communities.

I saw older feminists objecting; they work only on “traditional causes” such as fighting domestic violence, and the right of women married to non-Lebanese men to pass the nationality to their children. Generational gaps exist in feminism.

To me, feminism can be a holistic approach to human rights, socio-economic justice, political representation, security and a tool for conflict resolution. And isn’t that also what peacebuilding is about?

However, as an insider to the circles of feminism and peacebuilding in Lebanon, I know they both have internal demons to face credibly and transparently. But the major flaws stem not from the concepts themselves, but human error.

One example would be the handling of occasional sexual harassment scandals in INGOs and high-profile local organizations. Sometimes survivors are shamed and discredited, while perpetrators go unpunished.

I was once told of a young woman who committed suicide after her harasser was promoted. Another resigned unapologetically, quickly finding a better job, while the survivor didn’t get any support. Unfortunately, peacebuilding is not as free of patriarchy as one presumes.

Patriarchy is also a form of corruption and ethical failure. Peacebuilding is supposed to be a safe haven, but these abuses, inside Lebanon and worldwide, could be more rooted than we know, affecting vulnerable women such as refugees and internally displaced.

Another example is the attitude of some workers in both fields, who treat beneficiaries with arrogance. I once witnessed a well-dressed, high-heeled employee visiting a Syrian refugee camp, addressing the women – whom she was highly paid to serve – with disdain.

Recently, a local organization announced that a worker stole a large amount of money. The apparent lack of monitoring and security is deeply frustrating, particularly when one imagines the impact the money could have made to the lives of hundreds.

With such news, I understand if sceptical outsiders doubted peacebuilding. But on the other hand, numerous people are working for long hours, either at low or no pay at all, finding reward in helping others and making impact on a grassroots level. They embody the best of patriotism and humanity.

In feminism, some radical young activists call for “private feminist spheres”, excluding other women, and even feminists of other genders. At an October sit-in to support the revolution of the Iranian women, a Shiite clergyman well-known for his opposition to the Iranian regime and its local proxy parties showed up in solidarity. But he was yelled at and expelled.

I believe he should have been given a moment to explain himself. When you complain of patriarchal exclusion, it is counter-productive failure to ban people yourself. And advocacy is about promoting your cause among new audiences, even adversaries.

Further, that aggressive behaviour had an immediate counter effect. I saw people who had come with their children leaving the event, and passers-by mocking the “crazy angry females” and their “private sphere”. Women don’t need additional ghettos; on the contrary, they are fighting them at homes and in public seeking open safe spaces everywhere. To me, this attitude seems patriarchal in itself, mirroring the patriarchy’s oppression and silencing of dissent.

Modesty and more knowledge of others are lacking among some peacebuilders and feminists in Lebanon, and that could apply everywhere. There should be internal accountability and constant self-awareness to address whatever practices are alienating the population from peacebuilding and feminism.

"Peacebuilders and feminists must also realise they are not in a competition against each other for donors’ money or international exposure."

The change always starts from within. Peacebuilders and feminists must also realise they are not in a competition against each other for donors’ money or international exposure.

There is a lot of work to do for women, refugees and all the marginalised in this country and worldwide. They could achieve it together, sharing share expertise and resources, dismantling all forms of patriarchy.