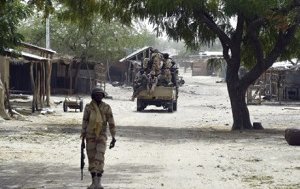 Baga Sola market, where dozens of people died in a terror attack in October. Image credit: Bouyo Severin.
The attacks occurred just two months after the passing of a law intended to stop them
On 10 October of this year, a double terror attack took place in Chad, in and near the Baga Sola market town on the Nigerian border. The preliminary toll reported 37 dead and 52 injured, according to the Chadian authorities. Responsibility for these attacks has been attributed to Boko Haram, intended to reaffirm the group's capacity for harm, as a reaction to the incursions of the Chadian army, alongside those of Cameroon and Nigeria, across the border.

These attacks came just two months after Chadian law 034/PR/2015, on the suppression of acts of terrorism, was adopted unanimously by the Chadian parliament. They therefore reopened the debate regarding the utility of this law in the fight against terrorism in Chad, which has been criticised by academics, researchers, some of the political opposition, and civil society leaders.

According to those critics, some provisions could give rise to interpretations of the law that would limit fundamental freedoms, including substituting the death penalty for life imprisonment as the maximum sentence. Reopening the debate on the right to life as a fundamental human right will be no deterrent for terrorists who aim only for death in their actions.

Innocent or guilty? Interpreting the law

In order to fight terror effectively, all of society needs to be involved
For Dr. Ahmat Mahamat Hassan, a constitutional lawyer and research professor at the University of N’Djamena, the definition of terrorism in the law is too broad: "It could allow anything to be called terrorism... Criminal law should be strictly interpreted.” Dr. Ahmat also noted that some inmates executed in September were allegedly innocent.

This view is reinforced by that of Doumla Hibra Laurent, in charge of planning and monitoring for the Chadian League for Human Rights. According to him, it paves the way for 'arbitrariness' and could lead to serious mistakes, especially if informers are paid to report alleged terrorists. In his view, in order to fight effectively against terrorism, all sectors of society need to be involved, working specifically to restore trust between the population and the security forces. He also said that some of the inmates executed in September were allegedly innocent.

“We have to involve the state and its security forces, which should protect human rights, guarantee security, social justice, development, and good governance, and fight against terrorism’s spread. We must equally involve religious individuals who have an obligation to provide good parental and religious education and organise collective prayers as some already do.

"Finally, we should involve teachers and families in the process of educating and supervising young people.”

"Poverty, injustice, exclusion, frustration, and weakness of the state are conditions that favour terrorism"
For Father Paolino Tipo Deng, Coordinator of the Chadian Interfaith Platform, the state and religious leaders must intervene against the causes and conditions that foster terrorism:

“Poverty, injustice, exclusion, frustration, and weakness of the state are conditions that favour terrorism. Its causes are very much linked to the ignorance of sacred texts and extremist ideologies, which exist in all religions.

"We need to make young people and the population in general more aware of non-violence, promote development and fight against poverty, educate believers towards a proper understanding of sacred texts, and have in every religion a supervisory and control authority.”

According to the Secretary General of the Higher Council for Islamic Affairs, those who call themselves terrorists cannot be Muslims, and their radicalisation is not due to religious reasons. They ignore the Holy Quran and the language in which it is written, and condemn any other religion. They think they can impose sharia law everywhere. But in countries such as Chad where many religions coexist, it is difficult to apply sharia law.

“We must strengthen the Interfaith Platform, and bring different religious youth groups together to reflect on their future and peaceful coexistence."

A single law will not be enough to fight against terrorism, and Chad will clearly also need to adapt its response and intelligence strategies. But the latest attacks are proof that this law will not prevent the terrorism of Boko Haram or others.

Update: on Saturday 5 December, a further three suicide attacks took place on an island in Lake Chad. We asked Bouyo Séverin for his response:

"Once again, these attacks relaunch the debate on the relevance of the measures taken by the Chadian government. Despite the law intended to stop terrorist attacks and the recently declared four-month state of emergency in the Lac region, the terrorists continue to act with ease. The strategy to deal with this phenomenon therefore needs to be adjusted. Above all, there needs to be a society-wide intervention involving all actors."