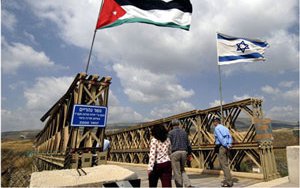 Israeli / Jordanian flags on the wooden bridge over the Yarmouk River (a tributary of the Jordan River) mark the entrance onto the Peace Island. Photo credit: EcoPeace / FoEME

In the years following its inception in 1994, EcoPeace/Friends of the Earth Middle East (FoEME) promoted cooperative relations between Israelis, Jordanians, and Palestinians over issues pertaining to the region's shared environmental heritage and resources. These were optimistic times of the Peace Process, when and an end to the bloody Israeli-Arab conflict seemed near.

But the turn of the Millennium saw us entering into a period of great turmoil and uncertainty. By 1998, the belief that peace in the Middle East is indeed within reach had faded in the face of the Oslo Accords' failure to stand up to peoples' expectations. Being a regional organization in a region where the very term Peace Process has come to mean increased violence and preservation of the status quo – was becoming harder than ever.

In order to stay relevant EcoPeace/FoEME, a top-down advocacy organization at its inception, decided to complement this classic method of work with a bottom-up approach of community led activism that emphasizes dialogue, confidence building, and cooperation activities on cross border natural resources, particularly shared waters. Despite the outbreak of the second Intifada in 2001 we managed to convince funders that cooperative relations between Israeli, Palestinian, and Jordanian communities were possible, and the organization's ‘Good Water Neighbors’ (GWN) project was launched early that year, initially involving 11 communities - five Palestinian, five Israeli and one Jordanian.

The project was designed to raise awareness of the shared water problems of these communities, educate youth and harness both adult residents and municipal staff to the task of changing reality on the ground. Based on identifying cross-border communities and utilizing their mutual dependence on shared water resources as a basis for developing dialogue and cooperation on sustainable water management, the project today includes 28 communities (11 Palestinian, nine Israeli and eight Jordanian), who share the Jordan River, the Dead Sea, the Mountain and Coastal Aquifers, and various cross border streams.

By addressing issues of sanitation and conservation the GWN project thus constitutes the basis for our efforts to advance the rehabilitation of these declining natural resources. Another major goal is to help these communities in developing the social and economic potential that the rehabilitation of these shared waters hold, with a strong emphasis on opportunities for tourism.

Israelis, Jordanians and Palestinians participate in a ‘Big Jump’ event in the Lower Jordan River, in a joint call to the region's governments to rehabilitate the River, 2010. Photo credit: EcoPeace / FoEME

Our field staff (we have one in each of the GWN communities) helps us to identify priority initiatives for each pair or cluster of cross border communities. In order to maintain our focus on cross-border cooperation and peace-building, we limit ourselves to initiatives that either entail the actual cooperation between the neighboring communities in order to solve a problem, or the promotion of solutions in one community that would have a significant cross-border impact – that is, would improve the well-being of the neighboring community.

Due to the lack of adequate sanitation infrastructure in large areas of the West Bank, for example, untreated waste water and raw sewage, both domestic and industrial, flow into streams that originate in the West Bank and cross the Green Line into Israel, contaminating on its way not only the streams themselves but the ground water as well. And since these streams, and the Mountain Aquifer below them, have no regard for political man-made boundaries and cross the Green Line ever so indifferently - this hazardous pollution risks the health of both Palestinians and Israelis.

Promoting sanitation projects in Palestine, in conjunction with Palestinian and Israeli stakeholders (the Palestinian Water Authority and the Israeli Civil Administration for example), as well as with the donor countries and agencies, is therefore a major focus of our work in the region.

Not surprisingly though, it is not so easy to convince ‘enemies’ to cooperate. We have learnt that success at creating cross-border cooperation in the midst of a conflict zone largely depends on the ability of the organization to convince the respective local decision makers and the public that such cooperation, particularly when pertaining to shared resources, is in their own best interests. It sounds right but, when so much hostility and prejudice is involved, it is hard to acknowledge that by cooperating I will not do a favor to my enemy, but to myself.

We were able to play the role of facilitator and mediator, and thereby promote a better understanding between, for example, mayors and heads of regional councils in Israeli, Palestinian, and Jordanian communities along the Lower Jordan Valley. The various parties realized the grave impact on their communities’ health and economic wellbeing caused by the demise of the Lower Jordan River - once the Mighty Jordan, now a trickle of sewage. From the Palestinians point of view, the main issue was the denial of access to the river and the economic potential of the river. The parties therefore agreed to: act to remove sewage from the river as much as possible; promote the economic and tourist development of the valley, and; create and promote public pressure on national decision makers in order to make rehabilitation of the river a priority.

Map of the planned Peace Park, on the border between Jordan and Israel. Photo credit: EcoPeace / FoEME

Another joint venture, and very complex one at that, is the Jordan River Peace Park in the area of the existing Peace Island in Naharayim, on the border between Israel and Jordan. In 2007 the mayors of the GWN Israeli and Jordanian communities signed a Memorandum of Understanding to create the Peace Park. Subsequent efforts have included outreach to relevant communities, decision makers and professionals both in Israel and Jordan.

In 2008, plans for the park were developed at an international design workshop partnering local professionals with architects and planners from Yale University in the US. A pre-feasibility study was conducted giving a greater understanding of potential costs and revenues from the site. On the Jordanian side, regular dialogue and outreach efforts between Jordanian FoEME staff and military and political officials have been focused on declaring the Jordanian area as a national park.

These efforts have now borne fruit at the highest level: Most recently, the Jordanian Army gave approval for FoEME to rehabilitate the old train station on the Peace Island. Endorsements from Israeli government officials including President Peres and the Ministries of Tourism and Regional Cooperation have resulted in commitments of 1.8 million Israeli New Shekels (500000 USD) to be further invested in the Israeli portions of the proposed Peace Park.

We still have a long way to go, with the Peace Park project as well as with many other GWN initiatives. Stakeholders in each case are numerous and often present conflicting agendas, with political sensitivities necessitating creative thinking. The need to deal with accusations - directed at FoEME and the project's communities and local leaders - from all segments of the political spectrum in each country is frustrating. Yet the role of civil society in any conflict-ridden region - both past and present - is no less important than the political track, and can often facilitate political decisions and breakthroughs on local, national, and international levels.

Through the GWN project we learn anew each day just how empowering civil society can be for constituency-dependent local and national political leaders, and how fruitful grassroots peacebuilding can be for a future final political agreement - one that we long for. Like so many others in the Middle East. 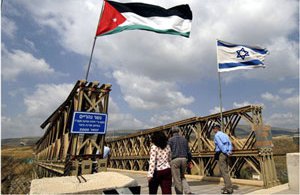