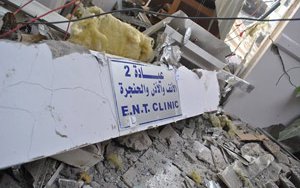 The destruction of medical infrastructure across Yemen has contributed to the enormous problems faced by those caught up in its conflict. Some 15 million people require some kind of healthcare.

For almost a hundred and thirty days, Yemen has been a battlefield for an international proxy war. Yemenis are trapped in a seemingly endless conflict, suffering in a humanitarian crisis that is the price being paid for the ambitions of militias and dictators. They are at the mercy of the strategic interests of others. And voices of peace and reconciliation are being lost in the winds of mistaken regional and international policy.

This tempest is far from over, and a national emergency is now well underway. At least six million people are facing emergency food insecurity, while violence continues to spread.

A country in ruins

More than a million IDPs are fleeing the firing range that the country has become
In the middle of this, vital infrastructure is being destroyed. 54 health facilities have been seriously damaged and 462 schools deliberately destroyed since the beginning of the conflict. Indeed, schools are now key buildings in the violence. 249 have been occupied by internally displaced persons (IDPs), with another 68 occupied by armed groups. There are reports that IDPs are using desks and chairs for firewood. And the numbers of those IDPs across the country are staggering. 1,267,590 people – a 24 per cent increase since June alone – have been forced from their homes.

They are fleeing the firing range that the country has become. Reports have documented the way in which all sides are taking the opportunity to use their stockpiles of old and new weapons, which has in turn led to the country becoming a feeding frenzy for arms dealers, and a training ground for soldiers, pilots and militia. Furthermore, there are reports of child soldiers being recruited – sometimes by force – and young men and boys in particular are being killed in numbers.

But it seems that the whole world is blind to all of this.

With the Iranian nuclear deal, the Gulf Cooperation Council countries (especially Saudi Arabia, the United Arab Emirates and Kuwait) are questioning the support of their previous allies in the west. They are putting all their resources into the conflict in Yemen, which they see as a fight for their survival.

But that is putting the survival of Yemenis themselves at risk. The country is suffering from shortages of food, fuel and medicine, and land transport costs have increased over 500 per cent since the escalation of violence in March.

9.4 million people have severely disrupted access to water, and outbreaks of water-borne diseases including cholera have been reported. 2.3 million children are at risk of developing acute diarrhoea. Medical centres are in need of every type of supply.

The legacy of conflict: disaffection and devastation

No one seems to care about the six million people who need food
This catastrophic situation means Yemen is becoming a feeding ground for radical Islamic groups and militia. Al Qaeda in the Arabian Peninsula and ISIS are beginning to take part in the conflict. And other groups also have their own militias, participating with the popular resistance and others.

But no one seems to care about the six million people who need food. Local producers, farmers and fishermen have been abandoned. Half a million people have been affected by the disruption to the fishing industry around the coastline.

Fully 15 million need basic healthcare, and there has been an outbreak of dengue fever in six governorates – but care providers are unable to carry out detailed surveillance because of the virtual breakdown in the health system.

Such wide-scale conflict has forced many to flee, including me and most of my family. We have left behind our lives: our memories, homes, work, friends and relatives. We have no idea what’s next.

The difficulties for civil society

Civil society must be allowed at least to try and broker local truces
The violence in Yemen has also devastated civil society. In the decade until 2011, and even until the beginning of the current crisis, Yemen enjoyed a relatively strong civil society. There was a vibrant and active movement of local NGOs and charities working on a wide range of issues. They were giving hope for a new socio-political settlement for the country.

The war is killing that hope. The basic needs for any meaningful work to place are simply not there: safe and reliable transportation, good communications, office space and supplies and almost all fundamental infrastructure is missing or has been destroyed.

The human rights activists and journalists who are daring to continue to try and work are being threatened, and the climate of fear that has descended on the country means that no one is sure who to trust. Since March, everyone has known that ‘if you are not with me, you might be against me,’ and with every side in this incredibly complicated conflict seeking to spread and reinforce their influence, they are seeking to control and manipulate – or threaten – those who they find in their path. Those who resist are harassed, if not arrested or killed. Offices have been looted and staff forced to flee; NGOs thought to be on the wrong side of any local conflict have to declare their allegiance or risk the consequences.

This situation is desperate. The conflict shows the ugly side of national politics and global policies that are leaving a country destroyed in its wake. No one knows how it will end, but civil society must be allowed at least to try and broker local truces for the delivery of essential supplies. I know from my contacts across Yemen that there are examples of where people are struggling to build peace, but it is increasingly difficult the longer the conflict goes on. There are rivers of blood coursing through Yemen, and someone has to try and stop them.

Disclaimer: The views expressed in this article are those of the author and do not represent the views or position of Peace Direct.