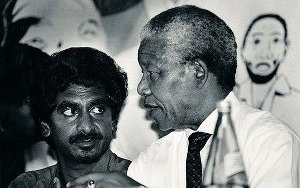 Having spent much of my life fighting for Mandela’s freedom, and then working alongside him for the decade he led South Africa - navigating an end to a potential racial civil war - I feel that his human values are his most profound contribution to the changes we want to see in the world.

We were inspired by his conviction that, “Overcoming poverty is not a task of charity; it is an act of justice. Like Slavery and Apartheid, poverty is not natural. It is man-made and it can be overcome and eradicated by the actions of human beings. Sometimes it falls on a generation to be great. YOU can be that great generation. Let your greatness blossom.”

My first encounter with Mandela was on that historic day of his release, 11 February 1990. His humility, compassion, integrity – in spite of 27 years in apartheid prisons - still ring true: “I stand here before you not as a prophet but as a humble servant of you, the people. Your tireless and heroic sacrifices have made it possible for me to be here today. I therefore place the remaining years of my life in your hands.”

That is the Mandela I knew - the servant leader. In a world that is hungry for visionary leadership and action that’s what people remember. That is the sadness that pervades our world today. In slums, villages, schools, busses and trains and community halls, we weep because we yearn for the kind of leadership that Mandela provided; we want leaders who are characterized by an absence of political arrogance.

I recently paid my respects to the Canadian community of Lac-Mégantic, where my wife Lucie`s mother, Louise Grondin, was born. A runaway train of death, with its incendiary load of crude oil, crashed into the downtown of this picturesque town, its deadly blast sending a towering cloud of toxic fumes and a wave of fire that scorched everything in its path, killing dozens of innocent people.

Claire Boulet, a family friend who runs a small bakery in the Quebec town said in outrage, “It’s just about money, money, money. We work hard to feed our families. We have to pay so much for our taxes and services. Yet these big, powerful and greedy companies don’t care a damn. They don’t care about ordinary people. What is important is their profit. We cannot continue. Our children will have no world left.” Claire’s sister perished in the deadly fireball.

Unfortunately, Lac-Mégantic’s tragic story is repeated many times in communities I meet across the world. In Dakar, Bangladesh, at the site of the deadly Rana Square garment factory collapse where more than a 1000 workers were killed, Nazma Akter, the general secretary of the Sommilito Garments Sramik turned to me and said, “We need people in the west to understand that nothing is free. When you buy cheap clothing or buy one and get one free, realize that nothing is free. Someone has to pay. Here it is the workers with their lives. Our lives are cheap.”

The building, owned by a businessman with political connections, had only days before been visited by government building inspectors who called for its closure and evacuation. It never happened.

In the Nigerian capital city of Abuja earlier this year I listened to a group of young bloggers. Bibi, a young and dynamic publisher spelt it out clearly, “Our problem is not leadership. It’s followership; we vote for leaders even when we know they are corrupt. We think in terms of tribe, religion, culture, language. We let ourselves be divided and our votes bought off when elections happen.”

Ndidi Nwuneli, a dynamic Nigerian woman entrepreneur who works with smallholding farmers and founded the Africa Leadership Institute in Lagos, adds, “Women are the primary producers of 80% of the food in Africa. But as their crops move across the value chain, fewer and fewer women are involved. It is dominated by middlemen who control the value chain to the market.”

In Kenya’s Mukuru Kwa Reuben slum, one of the largest in Nairobi, Dorice, a slum dweller, reflects the views of so many in the world, “We do not live the lives of middle-class women in the suburbs. Here we fight for the right to a toilet. We are treated like dogs. We live in one room, with our children, even teenagers. We give birth there. We eat, sleep, cook and raise our children in these one-room shacks. We are forgotten. Life is hard.”

We need to create the platforms that allow the marginalized poor, unemployed youth, and women in rural villages to have a global voice. Ashok Kumar Bharti, a Dalit leader in India, captures this sentiment, “Ours is the struggle for social inclusion and the recognition of our human dignity. We will not allow our people to be trampled by a tyranny of the upper castes. We will speak for ourselves.”

Our freedom struggle in South Africa was organized around bread and butter issues of our people. That created the political tsunami that eventually toppled Africa’s most powerful regime. We co-created a vision and strategy that ensured local ownership and grassroots leadership that would withstand the most ferocious attacks of our enemy. We never drew up a business plan or sought out some generous donor. We never entered the struggle for development as a career. We were volunteers driven by passion. We were outraged by social injustice. It made us fearless.

In a time where we desperately search for heroes and heroines, perhaps we have been searching too long in the wrong place. It’s time to refocus our gaze and look towards to our people, where we will find legions of Mandela’s who are working selflessly amongst the poorest, bringing hope to their doorways every day - in a world that, for all intents and purposes, seems to have stopped caring.

As Nelson Mandela famously said, “As long as poverty, injustice and gross inequality persist in our world, none of us can truly rest. What counts in life is not the mere fact that we lived. It is the difference we have made in the lives of others.”

Jay Naidoo is the Chairperson of the Global Alliance for Improved Nutrition (GAIN), a global foundation headquartered in Geneva that is committed to addressing malnutrition facing two billion people in the world. GAIN is a public–private partnership that brings together United Nations (UN) agencies, private businesses, philanthropic organizations, governments and civil societies around practical programmes in some 30 countries worldwide. Jay is the co-founder of an investment and management company in South Africa, the J&J Group. In 2007 he set up the J&J Development Trust and dedicates himself full-time today to voluntary work and social activism across the world. He serves in an advisory capacity for a number of international organizations including the Broadband Commission of the International Telecommunications Union (ITU) and United Nations Educational, Scientific and Cultural Organization (UNESCO) and the Lead Committee of the UNSG on Nutrition. He also serves on the Board of the Mo Ibrahim Foundation which focuses on Governance in Africa. Jay is currently the Patron of Scatterlings of Africa, a science education initiative that celebrates Africa’s status as humankind’s ancestral home. Jay Naidoo served as the Chairperson of the Development Bank of Southern Africa from 2000-2010. From 1994 to 1999, he was the Minister responsible for South Africa’s Reconstruction and Development Programme (RDP) and Communications Minister in Nelson Mandela’s Cabinet. He was the founding General Secretary of the Congress of South African Trade Unions (COSATU), where he served three terms (1985 to 1993). Jay is also a recipient of France’s Chevalier de la Légion d'Honneur (Legion of Honour). He publishes a blog at www.jaynaidoo.org and has written his autobiography – ‘Fighting for Justice’.
Read more from Jay Naidoo
Disclaimer: The views expressed in this article are those of the author and do not represent the views or position of Peace Direct. 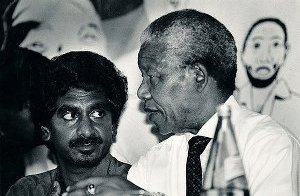