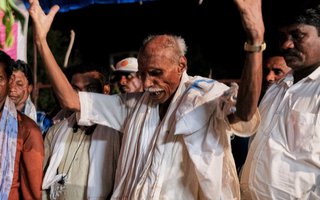 Photos by: Diptendu Roy
This deadly conflict, which has taken 12,000 lives in the last twenty years, is little known outside the area – partly because those who have paid the highest price are Adivasis, indigenous forest-dwellers, who are among the poorest and most marginalised people in the world.

The sound of drumming, and the flash of dancing feet went late into the night. But this was a dance routine with political intent. For hundreds of people who gathered from four states in southeast India, the festival marked the moment when they hoped to begin to return from fifteen years in exile.

The dancers fled their homes in the giant Dandakaranya Forest, crushed in fighting between government forces and Maoist insurgents, who had made the forest their headquarters. The Maoists were called India’s ‘biggest internal security threat’ in 2009 by the then prime minister, Manmohan Singh.

This deadly conflict, which has taken 12,000 lives in the last twenty years, is little known outside the area – partly because those who have paid the highest price are Adivasis, indigenous forest-dwellers, who are among the poorest and most marginalised people in the world.

Very few of those displaced want to return to their villages, which are still unsafe.

In a series of meetings in the last year, a new mood has grown among the Adivasis of Dandakaranya Forest, looking to a new future without conflict. They know that the path will not be easy, and they may not be able to return to their original homes. And before they began the formal application process, they decided they should ask forgiveness of their village gods for abandoning them, and not tending them for so long.

So the Pen Pandum – ‘Festival of the Gods’ in the local Gondi language – began with a long session of prayers by five native priests, led by Sher Singh Achala. He invoked the gods of 644 abandoned villages, asking for support for those displaced by conflict, as they look for more settled lives.

After dancing late into the night, the next day the first application forms for new homes were completed by 350 people, before the drumbeat began again, the drums borne by men wearing headdresses with giant horns, and the dancing went on for another night.

A major problem for the forest dwellers is that they do not share modern views of land ownership, and have no title to land their families may have inhabited for hundreds of years. Under the 2006 Forest Rights Act, a relatively liberal law, the state will allow settlement rights to people who can prove continual residence.

Very few of those displaced want to return to their villages, which are still unsafe. And in their applications, they are now testing a clause in the Act which grants resettlement elsewhere to people unlawfully evicted from ancestral homes – either on the land where they are living, or giving them new plots in the forest. The government is currently deciding whether the clause will apply to this conflict.

The Festival of Gods, and the move towards applying for homes under the Forest Rights Act, both emerged from a grassroots peacebuilding process built by a citizen journalism network, CGNet. For ten years, we have been training Adivasis to tell their stories, recording them on mobile phones. The stories – songs or poems or reports about a closed school, broken handpump, failed electricity, or missing pension are curated, and an edited bulletin made available, again by mobile phone. In areas where there is no phone signal, one person travels to a place where there is signal, records the bulletin and others in the village hear it through bulltooth – a corruption of this name has given the project its local name ‘Bultoo Radio’.

In the ten years since the project began there have been more than 600 cases of issues that have been resolved through CGNet – a unique way of citizens holding government officials to account and connecting them to the state.

In the ten years since the project began there have been more than 600 cases of issues that have been resolved through CGNet – a unique way of citizens holding government officials to account and connecting them to the state.

During the year that we have opened the way for a new route to peace, other ideas that emerged from Adivasi meetings were for a 200km march, a ‘yatra’, symbolically along a route that the Maoists used when they first came into the forest in 1980, and, more ambitiously, a 300km ‘cycle yatra’ to the state capital of Chhattisgarh. This is dangerous work. The Maoists threatened both events, and continue to threaten the Adivasi leaders who have emerged.

CGNet are hoping that the work can continue to build local voices for peace, which could ultimately play their role in framing peace talks between the government and the Maoists.

Conflict prevention and early warning Environmental peacebuilding Human rights
Disclaimer: The views expressed in this article are those of the author and do not represent the views or position of Peace Direct. 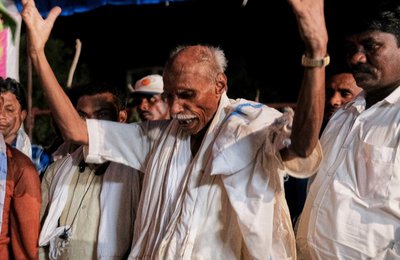