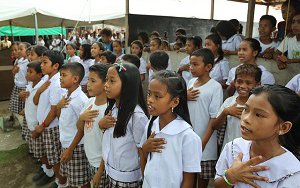 In the Philippines, the school year starts in June. But this year, many students at schools for indigenous peoples will be unable to go to classes, with their schools accused of being recruiting centres for anti-government rebels. As such, they have been shut down or occupied by the military.

The disconcerting reality of the militarisation of schools

For example, the Save Our Schools Network says that the Children's Rehabilitation Center has documented 82 incidents of state-instigated attacks on 57 schools and daycare centres in Mindanao, including 13 so far this year.

The Oplan Bayanihan counter-insurgency programme allows the use of schools as military camps and outposts. The Save Our Schools Network has criticised the Department of Education for supporting the military's use of schools.

It appeared last week that the Department of Education's regional office would allow schools to open, and would grant permits to operate. But troops of the Army’s 67th Infantry Battalion allegedly threatened Lumad parents and students in Sitio Paglusngan, Barangay Taytayan in Cateel town, Davao Oriental. Teachers were asked to stop their classes.

So pupils and teachers will not be able to return to school, despite having permits to operate, because of the military presence. Many human rights organisations want the military occupying the schools to leave, saying the Department of Education must not allow the military to use schools for its counter-insurgency operations, as schools are zones of peace.

Indigenous communities and schooling in the Philippines

Most indigenous communities are in the hinterlands and uplands of the Philippines, while most schools are in town centres.

So indigenous leaders have worked with non-government organisations and church-based organisations to establish schools in their areas. For example, the Talaingod elders of the Salugpongan group requested the Rural Missionaries of the Philippines set up schools from 2007. There are now about 36 schools and a hundred teachers in their area.

The municipal tribal councils recognised these schools and the Indigenous People's Education Office has accredited them, since they carry out elementary and high school curricula, and they are funded by churches, international and local networks.

However, about 2,896 other Lumad (indigenous) children will not be able to attend school this year, as the government has shut down indigenous community schools in Davao del Norte in Mindanao, in the southern Philippines.

As a result, many civil society organisations are calling for the revocation of the Department of Education's Memo 221. The Secretary General of Karapatan, a national human rights organisation, Cristina Palabay, said that the memo “legitimises the use of schools/educational institutions for military purposes.”

Spokesperson Jenielito Atillo, from the Department of Education, rejected this, saying that the department had "only issued a Notice of Non-Renewal of Permit” for the schools, and had not ordered their closure.

School administrators have said that the government Army accuses the communist New People’s Army of building their schools.

When soldiers act as para-teachers, they militarise the school, making it a legitimate subject of attack and combat
Civil society and faith groups have all come out in opposition to the closing of indigenous schools and the use of these schools by the military. Both the Catholic Church and mainstream Protestant Churches have issued statements against the closure of the indigenous schools and the subsequent militarisation of these schools. An interfaith alliance has denounced the Department of Education and the Armed Forces of the Philippines for closing 3 indigenous schools in Davao del Norte, replacing them with a public high school where soldiers will allegedly work as ‘para-teachers’.

Rex B. Reyes, the general secretary of the National Council of Churches in the Philippines said that “The move by the Department of Education to close three hinterland schools for the Ata-Manobo tribe in Talaingod, Davao del Norte affects adversely almost 3,000 Lumad children."

Reyes said that precisely because the government failed to provide basic social services such as education in indigenous communities, religious groups have filled the gap by supporting these schools.