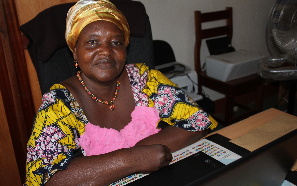 Tamanna Kalhar from Conciliation Resources recently travelled to Bangui, the capital of Central African Republic to find out more about the local efforts to tackle violence in the country. During her visit Tamanna met Madame Rashida Mamba, a remarkable Muslim peacebuilder who works at the Interfaith Secretariat. The Interfaith Secretariat is the HQ of the Interfaith Peace Platform, which won an international UN peace award in August for its work to reconcile Muslims and Christians in the hope of restoring lasting peace in CAR. Below is Tamanna's interview with Mme Rashida.

What is the importance of your role in supporting peace in CAR?

I design programmes which work to promote social cohesion. Social cohesion is about different communities being able to coexist peacefully.

Could you tell us about some of the activities you do to promote social cohesion?

What activities have you got planned for the future?

Since joining the Secretariat, we have developed the main areas of this programme with activities that can be carried out in the field. The activities that I have planned for now are social cohesion and trauma healing training workshops. Including training for peace actors with the various communities’ female leaders. These are the activities we are considering at the moment and for which we are seeking funding.

Are those women survivors of the crisis?

How is the Interfaith Platform helping to contribute to reducing tensions in your community?

Women are the wardens of cultural values which are very important for peacebuilding
The Platform has contributed a lot since the beginning of the crisis. Its leaders were in the field, raising awareness amongst the communities on the nature of the crisis. But the international media instrumentalised the situation so that the conflict was turned into an interreligious conflict. And this made the situation worse. But the Platform has done a lot. The leaders are present as leaders, but it is the various grassroots entities that work to reduce the tensions within communities, including the Women’s Platform, the Youth Platform and certain actors that have received training in social cohesion and peace committees.

What are the roles that the women can play in peacebuilding in CAR?

Women can play a very important role in peacebuilding. In the days of our grandparents, it was the women who were the main actors in bringing back peace to the communities. In tribal conflicts, if a woman comes out in a customary manner, grabs a leafy tree branch and shakes it between the two adversaries, the hatchet is buried. So women are the wardens of cultural values which are very important for peacebuilding, to put an end to conflict and to disagreements between communities.

How has your life personally changed since the crisis?

In terms of our personal experience of the crisis, we have encountered many changes. We lost assets, I lost my home and my family has been split apart as some of my family members have escaped to different countries. I owned my own house before the crisis, I now have to rent however.

The positive side however, is that it is due to the crisis that we have received training in social cohesion, peacebuilding and we have now become trainers for other members of the community. We talk about peace, advocate peace. As a result of the crisis, leaders managed to come together on a platform. We no longer see the religious differences because we have one common objective: to seek peace and to bring peace back which has led everybody to gather; Catholics, Protestants, Muslims. We all share one single objective, peace.

What is your vision for the Interfaith Platform in the future?

Looking to the future, the platform must grow. We are only just beginning, it is not easy to automatically come out of this situation. We have major centres, such as Bangui, but we also have other localities in the country. So we are considering setting up branches in the rest of the country. This will allow us to carry out the same work and spread the vision of the leaders who set up the platform, in terms of social cohesion, seeking peace and mediation between communities.

Tamanna Kalhar is a Media & Communications Officer for Conciliation Resources. She is a former British journalist and deputy editor of Red Pepper magazine based in the UK.
Read more from Tamanna Kalhar 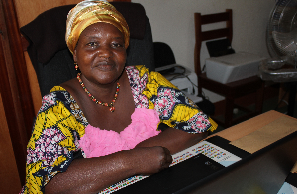