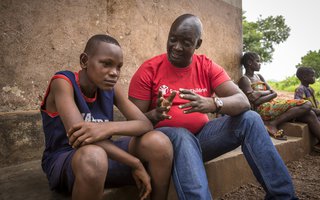 Sierra Leone may be home to the first and oldest mental health (MH) clinic in Africa, established in 1872, but the country still battles with deep-seated challenges associated with mental health conditions.

During eleven years of civil war, over 50,000 Sierra Leoneans were killed, thousands were maimed, and many more lost their livelihoods and were left with profound psychological wounds.

In 2015, Sierra Leone’s veteran psychiatric doctor, Dr. Edward Nahim, warned that the civil war and the Ebola crisis had contributed to serious post-traumatic stress disorders, psychosis and depression among victims. He added that such conditions have led to an increase in crime, lawlessness, drug abuse, poverty, discrimination and further stigmatisation.

Dr. Nahim explained in an interview with a local newspaper, The Sierra Leone Telegraph, that based on a joint Ministry of Health and Sanitation and WHO survey in Sierra Leone, “more than 700,000 people have severe mental health problems needing medical treatment; more than 350,000 psychotic case are caused by drugs and alcohol abuse, as well as by severe infections like cerebral malaria; more than 20,000 have severe Bipolar manic depressive disorders; more than 175,000 are mentally scarred; and more than 175,000 suffer from epilepsy or schizophrenia.”[1]

The scars that don’t heal

An assessment conducted by the International Medical Corps (IMC) suggested that during the Ebola crisis the country’s overstretched health system was unable to deal with the psychosocial legacy of the outbreak.

Many people lost entire families and their hope for the future. Fear, panic, stress, shame, uncertainty and isolation are increasingly common feelings among survivors, the organisation added.

The IMC warned that psychosocial interventions need to be considered as part of the Ebola response and that the country’s health sector should integrate mental health into its health service provision for the long term.

After the "August 14, 2017" flash floods and mudslide disasters which affected an estimated 3,000 people and left nearly 500 dead and an additional 600 unaccounted for, the need to provide an immediate response with care and mental health support to victims of the tragedy has been highlighted as top priority.

To facilitate this, the government activated emergency mechanisms that were established during the Ebola outbreak with staff and supplies deployed to badly-hit areas.

A national Mental Health Coalition working closely with the Ministry of Health and Sanitation (MoHS), the World Health Organisation (WHO), United States Agency for International Development (USAID) and others, had been set up to determine the most practical ways to get mental health and psychosocial support services to mortuary workers, volunteers, and burial teams in communities affected by the disaster.

This committee has dispatched field teams, led by trained mental health nurses, to give residents in the worst hit communities and hospitals (including Regent, Kaningo, Pentagon, Connaught Hospital, Lumley Hospital, and Don Bosco Orphanage) access to counselling and other mental health services.

These nurses have been facilitating referrals for victims in serious condition, including injuries, and providing follow up mental health support in the main hospitals of Freetown.

In just four days of intervention after the incident, mental health nurses provided support to over 850 affected individuals.

Frances Kemokai is one of the trained Mental Health Nurses (MHNs) providing psychosocial support to traumatised survivors of the mudslide in Regent village outside Freetown.

She says the victims contacted were very depressed and badly needed support. “They were so traumatised that they could not believe what had happened and so refused to accept the situation. Some happened to be the only survivors in their families. Many refused to eat, isolated themselves from others; they were in completea  state of loneliness,” Frances said.

“If there was no psychological first-aid (PFA) support, I wonder how things would have been within the next month in this country. People would have just gone mad; it’s really not easy,” she noted.

As a mental health nurse, Frances said that she has been able to pick out victims that needed support the most and listened to their stories. She said that after hearing their stories, she helped them by counselling them to stabilise their mental state and linked them to services and treatments they needed badly.

“We are hoping that everything will be alright because when the war struck, there was nobody professionally trained that could respond to mental health challenges. This caused a lot of depression in the country, with many victims committing suicide and others running mad in the streets.”

She observed that the heightened sense of frustration, poverty, economic inequalities and unemployment are leading causes of depression in Sierra Leone. She said that if mental health problems are not seriously considered and treated with urgency, the country’s peace and security will continue to be threatened.

“The frustration of people who lost everything including families to the mudslide have doubled and if nothing is done to respond to their social and economic needs, the likelihood of conflict is higher especially as the country draws nearer to the 2018 elections,” Frances explained.

Isatu Conteh is one of the mudslide victims receiving PFA from Frances and other teams of Mental Health Nurses (MHNs). Isatu’s entire family was killed by the mudslide at Regent on August 14th, 2017.

She survived only because she had travelled outside of Freetown on a business trip when the disaster struck.

Looking pale and totally devastated, Isatu tried to explain her loss: “My son, husband, mother and other family members all perished in the disaster; now I am alone in this world. It is like a dream to come back from my trip and meet my entire family wiped out just like that!”

After refusing to eat or associate herself with anyone for nearly a week, Isatu is happy for the mental health support she is receiving from Frances and other MHNs. “Even though I still feel very empty inside, I am slowly regaining strength and consciousness over what happened. I know that God spared me for a reason and I must find a way to move on with life.”

She continued “I am so grateful for this support. I may have ended up dying or even going insane if Frances and others had not come to my rescue; I really thank God.”

Mental Health issues were not given prominence in Sierra Leone until during the Ebola outbreak when the WHO observed that the prevalence of this condition was alarming and that treatment and recovery efforts were impeded by the high social stigma and lack of accurate information in the country.

Through the support and trainings provided by international partners in collaboration with the country’s Ministry of Health and Sanitation, mental health services are now available all over the country, with MHNs stationed in almost all district hospitals. Until this day, the reality around mental health in Sierra Leone, as Dr. Nahim had observed, is the inadequacy of financial and human resource allocated to tackle the condition.

Culture, media and advocacy Health and counselling Transitional justice and reconciliation
Disclaimer: The views expressed in this article are those of the author and do not represent the views or position of Peace Direct.

More on Culture, media and advocacy · Health and counselling · Transitional justice and reconciliation →