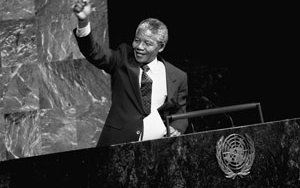 The other side of gender: men as critical agents of change

The move to incorporate men acknowledges them as a relatively untapped resource in promoting gender equality, peace, and stability. Tapping that resource, however, involves first, overturning some commonly held assumptions about the inherent differences between men and women, and second, exploring how social norms and structures shape men’s propensity toward violence — and how they can change and help establish peace.

The other side of gender, from USIP, argues that men need to be viewed more than simply perpetrators of violence during conflict, recognising that men are also victims of, and witnesses to, violence. According to the paper, better understanding of the complex experiences, and gender-specific needs, of men during violent conflict would strengthen peacebuilding work.

Towards a theory of ex-combatant reintegration

Towards a theory of ex-combatant reintegration, by Stina Torjesen, makes the case for developing a theoretical framework for reintegration.  The paper proposes a new definition of reintegration which focuses on the experiences of ex-combatants instead of programmatic activity, and suggests areas of further research.

“Better to die while speaking the truth”: Attacks against human rights defenders in North Kivu, DRC

Defenders in North Kivu have now been broadly forced to stop their monitoring and reporting activities, operate clandestinely, or risk their life for reporting abuses by both armed groups and elements of the national security forces. Many have been unable to return to their homes because they have been identified as ‘human rights activists’ in their towns and fear reprisals.

Better to die while speaking the truth, from Amnesty International, documents attacks on human rights defenders in North Kivu, DR Congo. Over the past year, human rights defenders in North Kivu have found themselves increasingly the target of both the security forces and non state armed groups. The report highlights the challenges of working conflict areas with little rule of law.

“Leave everything to God”: accountability for inter-communal violence in Plateau and Kaduna States, Nigeria

The cycle of violence is not inevitable. Nigerian authorities can and should take urgent steps to ensure that the perpetrators of inter-communal violence are brought to justice and the victims are compensated for their enormous personal and material losses.

Leave everything to God, from Human Rights Watch, explores the lack of accountability for acts of inter-communal violence in central Nigeria. The report finds that widespread impunity further inflames community tensions as people look to take the law into their own hands.

The latest edition of the African Journal of Conflict Resolution, from Accord, includes articles looking at inter-ethnic conflict in South Sudan, the need to consider the legacy of colonialism in conflict resolution, and strengthening political leadership in Africa.

By Michal Milner: Michal Milner shares some of the challenges of working in a conflict zone – in this case promoting cooperation between Israelis, Jordanians, and Palestinians. Read more »

The role of memorialisation in conflict prevention

By Kevin McCann: Memorialisation has a key role to play in preventing conflict, according to Williams Nkurunziza, the Rwandan High Commissioner. Read more »

Separating politics from violence in Colombia

By Fabio Andres Diaz: How the Colombian peace talks could lead to an opening up of political participation & a stronger democracyRead more »

By Flora McCrone: Local organisations are making sure that citizen’s voices are heard as South Sudan writes a new constitution. Read more »

Sport as a peacebuilding tool: Experiences from Nigeria

By Michael Olufemi Sodipo: Sport can be a powerful tool for building peace. Read how this Nigerian organisation is using sport to teach young people tolerance, cooperation and respect. Read more »

By Insight on Conflict: Tomorrow’s Peacebuilders 2013 winners present their peacebuilding work and tell us what the award has meant for them. Read more »

By David Greybe: Nelson Mandela’s legacy as a peacemaker is assessed by David Greybe, who reported on the apartheid era. Read more »