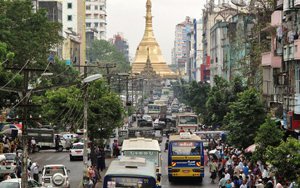 Understanding gender and how it links to peace and conflict in a particular time and place is key to designing inclusive and effective peacebuilding interventions.

Voicing concern, from Small Arms Survey, analyses the results of 43 surveys of people living in conflict-affected countries to get a picture of people's perceived priorities. The research aims to help guide interventions by looking at needs identified by local populations themselves. The paper looks at trends across countries and differences between population groups.

The peace deal is by no means the end of the conflict but marks a milestone in removing some of the obstacles to peace. Peace can only progress with attention to both community and national conflict dynamics.

Beyond relatively ad hoc military operations, there is currently no comprehensive policy in place to convince armed groups to lay down arms. For those willing to negotiate their surrender, it remains unclear what conditions and prospects they will be offered.

Understanding armed group proliferation in the Eastern Congo, from the Rift Valley Institute, explores the factors behind the increase in numbers of armed groups in eastern DR Congo. The paper finds that military action intended to reduce the number of armed groups may have been counter productive, and argues for more non-military solutions focused on persuading groups to give up their weapons.

Freedom from corruption: a curriculum for people power movements, campaigns and civic initiatives

This curriculum is a theoretical, practical and skills-based framework about citizen empowerment and nonviolent strategies and action. It’s designed for those who want to learn how people power can curb corruption, impunity, inequality and injustice, and perhaps more importantly, how it can gain accountability, bottom-up democracy, social and economic opportunity, and justice.

Freedom from corruption, by Shaazka Beyerle, is a self-study training manual aimed at civil society and concerned citizens on how to organise effective grassroots campaigns against corruption. It builds on lessons learned from extensive research into citizen empowerment and mobilisation against corruption from around the world

The African Journal on Conflict Resolution, from ACCORD, is an academic journal focused on conflict management and resolution in Africa. The latest issue includes articles on South Sudan's post independence conflict, Tunisia and Yemen after the Arab Spring, and student leadership in South Africa.

By Jean de Dieu Basabose: How Rwanda is increasingly recognising the importance of peace education in securing peace and reconciliation. Read more »

By Michael Stulman: How a beekeeping project in Casamance is showing communities how they can resolve conflicts and improve their villages. Read more »

By Balkan Diskurs: In Bosnia and Herzegovina, women have few employment opportunities. But a few hours of training can transform a traditional skill into a profession. Read more »

The environmental impact of conventional violence

By Adan E. Suazo: Adan Suazo argues that successfully tackling climate change involves moving away from a definition of violence that puts humans at the centre. Read more »

Winning the peace in Northern Ireland

By Alec Forss: Northern Ireland has made considerable progress in securing the peace after decades of violence. However, Alec Forss argues, much work remains to be done. Read more »

Casamance: neither war nor peace

By Tomas Serna: The Casamance region of Senegal is trapped in a state of non-peace. Tomas Serna reflects on the situation. Read more »

By Bouyo Séverin: Recent attacks in Chad have come as the government introduces a controversial new law to fight terrorism. But will it work? Bouyo Séverin reports. Read more »

By Bangladesh Peacebuilding Expert: Young people have a lot to contribute to peacebuilding in Bangladesh. But they need more support and guidance. Read more »

Where next after the Ivorian elections?

By Ivory Coast: Last month’s presidential elections in the Ivory Coast ended peacefully – unlike the last ballot, which led to civil war. But how stable is the peace? Read more »

After the elections, what next for Myanmar’s political prisoners?