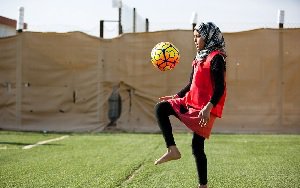 A girl practising her skills in the Zaatari refugee camp. The Center for Sport, Peace and Society visited the camp in December 2015. Photos courtesy of U.S. Dept. of State in cooperation with University of Tennessee Center for Sport, Peace, & Society. Photographer: Allison Davis.
They traded their jackets and hijabs for yoga mats and dumbbells
Looking down at her watch, Dima Alardah waits anxiously for the women to arrive. It’s 10:35 in the morning and the place looks like a ghost town. Miles of desert stretch into the horizon. There is silence – no traffic, no cars, no music and no conversations.

Waiting near the door of the fitness facility, shuffling feet and laughter can be heard in the distance. It grows closer. Turning the corner, donning the most vibrant hijabs, are Syrian women, chatting and laughing with one another on the way to their fitness class – in the Emirati Jordanian Refugee Camp.

This was the scene in December 2015, when my colleagues from the Center for Sport, Peace and Society visited the Emirati Camp. The women greeted Alardah with hugs and kisses, like a long lost friend. The impact she was making in their lives could be seen in their eagerness to embrace her and start their class together. She embodied the joy, happiness, hope and relief they have longed for and feel when participating in the training programmes Alardah has created in Jordan.

As the women entered the fitness facility, pulled the curtains closed, and locked the doors, they traded their jackets and hijabs for yoga mats and dumbbells. Dima Alardah hugged the instructor of the fitness class – a Syrian woman she had personally trained – and then moved to the back of the room.

‘What even is badminton?’

Alardah had in a few short years won three Jordanian championships
Alardah began playing sport when she was 10. First she tried gymnastics, competing for several years with Jordan’s junior national gymnastics team. Then she played basketball and volleyball. By the time she was in her final year of secondary school, she had discovered her true love: badminton.

“I started playing real badminton when I was 17 years old,” Dima tells my colleague Ashleigh Huffman, who is assistant director of the Center for Sport, Peace, & Society.

“I was much older than all the other girls – usually you start playing very young. But I took the challenge and I didn’t look back.”

Ranked as high as 285 in the world by 2011, Alardah, although she started late in life, had in a few short years won three Jordanian national championships and three medals at the Pan Arab Games.

But she still needed funding to compete in tournaments around the world. She wanted to qualify for the 2012 London Olympics. Balancing life as a part-time athlete and full-time architect, she felt hopeful that with added sponsorship money she could reach her Olympic dream.

Dima Alardah is a former Jordanian badminton champion. Now she is using her skills to help provide sporting opportunities for those who have fled the conflict in Syria. Photos courtesy of U.S. Dept. of State in cooperation with University of Tennessee Center for Sport, Peace, & Society. Photographer: Allison Davis.

“I was knocking on so many doors for sponsorship; many big names and many big companies in Jordan, but the answer was always no,” Alardah says. “When I asked why not, the answer was “'What even is badminton?” Nobody knew the sport. My heart sunk because I realised my dream of making the Olympics would never come true.”

But Alardah recovered quickly from the disappointment. She says the first rule of badminton is to manage the unexpected: to hit the shuttle where your opponent is not, and be on your toes to return it from anywhere on the court. So in 2012, she changed course, and started the SHUTTLERS Academy.

SHUTTLERS is the first badminton school in the Middle East, where Alardah trains 140 players per month. One of these players, a 12-year-old girl, has shown so much progress that Alardah has already recommended her for the national team. She hopes, perhaps, that she may be the one to cross the threshold into the Olympics.

It's challenging. We are working with conservative people in a conservative context
Here at the Center for Sport, Peace & Society, we first met Alardah in 2014, at a US Department of State and espnW Global Sports Mentoring Program. She had just taken a second job with the Norwegian Refugee Council, working in Jordan’s Syrian refugee camps.

In the camps, Alardah is a youth program officer working with residents between the ages of 16 to 35, in the huge Emirati and Zaatari camps. She specifically focuses on introducing sport to their lives, incorporating it into the organisation’s education-centred philosophy in its refugee work.

According to the NRC, more than 635,000 Syrian refugees have been registered in Jordan since 2011. 100,000 of them are in the country’s three formal camps: Emirati Jordan, Azraq and Zaatari. Estimates suggest the population of Zaatari’s camp make it the fourth most-populated city in Jordan; the camp itself is only 18 miles from the southern border of Syria.

Alardah’s responsibility is for children and youth, but she also places an emphasis on providing women with the opportunity to exercise and play sports.

Engaging women to rebuild their lives

“We try to open as many classes as possible for women,” Alardah said. “We have tailoring, beautician classes, IT, computer maintenance, and the sports program. But it's challenging for us, because we are working with conservative people in a conservative context, so it's not easy for women to engage.”

Religious and cultural influences, as well as the locked-down nature of life in camps like Emirati Jordan, keeps many women indoors. But Alardah and her colleagues are creative. In Emirati, instead of holding sports outdoors, they fill a small, private room with exercise equipment and invite the women to exercise indoors.

“When that center opened and we were inviting women to come in and play sports, they were the happiest ever,” Alardah says. “It feels like ‘Oh my gosh, you have this indoor room. We can actually work out inside.’ It is a new world for them and they love it.”

"Everyone here has something they are believing in"
Former United States women’s national team soccer players Lori Lindsey and Mary Harvey travelled with our team when we visited Alardah at the camps in December. They brought with them equipment donated from US Soccer, as well as a large banner from the USWNT’s #SheBelieves initiative, which they unfolded for the girls as they played soccer together in Zaatari.

“For these girls and for these women, having that phrase – ‘she believes’ – here in a camp that is only one hour away from Damascus, it means a lot,” according to Alardah.

The Zaatari refugee camp in Jordan. The camp's 100,000-strong population makes it one of the largest cities in Jordan. Initiatives such as the SHUTTLERS Academy demonstrate the vibrant lives that people in refugee camps can live. Image credit: World Bank.

“Everyone here has something they are believing in. It reminds these women to stay strong and to never lose hope in their dreams of going home,” she adds.

Being present with Alardah and the thousands of refugee women she seeks to reach through sports was powerful. There were tears, laughter and smiles. There were also difficult moments and a visible pain for the women, shrouded in the bleakness of the situation they’ve been in since civil war exploded in Syria.

A positive vision for the future

But, even more than the programmes themselves, what matters most to the refugees is not being forgotten. Hundreds of thousands have already lost everything. And now they are fighting not to lose themselves.

“You can see it in their eyes,” Alardah says. “It's a huge impact. I'm pretty sure that those kids, the youth we work with, they will never forget this. Because they feel like everyone is with them, standing together with them. And they’re remembered. They're not forgotten. That means a lot.”

Women, Peace and Security Children and youth
Disclaimer: The views expressed in this article are those of the author and do not represent the views or position of Peace Direct.

More on Women, Peace and Security and Children and youth →

Latest from Jordan and Syria → 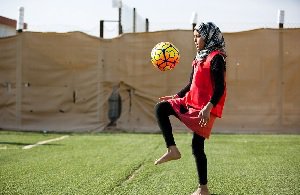 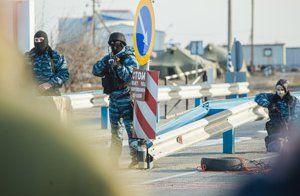 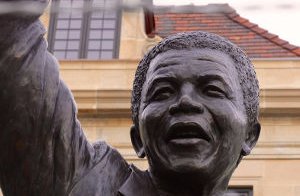