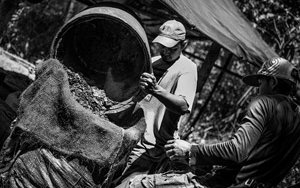 Relationships and resources: Environmental governance for peacebuilding and resilient livelihoods in Sudan

This approach requires rebuilding trust and relationships between stakeholders and communities that have been impacted by violence. It also calls for improving technical capacity of decision-makers and communities to advance new approaches for environmental governance and views local ownership and innovation as foundational to such efforts. Over time, improving cooperation over natural resources can have important “spill over” effects, often leading to cooperation in other domains and establishing a basis of trust for continued joint action.

Relationships and resources, from UNEP, describes projects undertaken by UNEP and it's partners to develop inclusive and participatory approaches to environmental governance. The projects sought to restore cooperation and trust between communities in conflict over resources, and in so doing benefit both resource governance and peacebuilding.

In these early stages of the transitional process, relations between civil society and political parties in Myanmar can be characterised as limited, informal and based on personal relations.

If they are equipped with more knowledge and resources on women’s rights from sources they trust, they can serve as positive agents of change in Afghan society. The right message coming from the right person makes all the difference.

Engaging Afghan religious leaders for women’s rights, from USIP, looks at how religious leaders can be encouraged to become promoters of women's rights in Afghanistan. The paper stresses the importance of respecting the values and opinions of religious leaders, and involving them directly in processes of change.

The lack of implementation of reconciliation processes in Liberia underscores the significant challenges faced by post-conflict states in developing and aligning coherent and locally-owned peacebuilding processes to achieve tangible, measurable and manageable progress.

The road to reconciliation, from ACCORD, looks at Liberia's 2013 Strategic Roadmap for National Healing, Peacebuilding and Reconciliation. The roadmap was intended to serve as a basis for future reconciliation initiatives in the country. However, one year after it's introduction, little progress has been made toward implementing it. This paper looks at why.

Much remains to be done in terms of clarifying concepts, developing the evidence base and putting theory into practice if the prospective benefits of integrating gender perspectives into early warning systems are to be fully realised.

Can we leverage empathy to stop Boko Haram?

Across the Line of Control: the real stakeholders of peace

By Ashima Kaul: Ashima Kaul looks at the Impact the border between Indian and Pakistani administered Kashmir has on communities. Read more »

By Harshadeva Amarathunga: Reflecting on the gender perspective in Sri Lanka and the lack of gender sensitivity in the Lessons Learnt and Reconciliation Commission. Read more »

What can Burundi learn from peacebuilding in Liberia?

Beyond political indifference: dealing with past wrongs in Uganda

By Insight on Conflict: Entries in this year’s Tomorrow’s Peacebuilding competition that use technology in an innovative way may win a scholarship to ‘Build Peace 2015’. Read more »

By Jaideep Gupte and Subindra Bogati: Fighting crime: how understanding security for an increasingly young, urbanising Nepal is important for peace. Read more »

The rising gap between Shias and state institutions in Pakistan

By Jaffer Abbas Mirza: With Shia mistrust of state institutions growing, what does this mean for the future of Pakistan? Read more »

Cocaleros: a photo essay of the Colombian coca production process

Creating space for women as transformers of conflict

By Laurel Stone: How important are local women in peacemaking? Laurel Stone explores the role that women can play in achieving lasting peace. Read more »

By Tim Bidey: Almost twenty years on from the end of the war, a new campaign aims to increase understanding and decrease stigmatisation of survivors of rape in Bosnia.Read more »