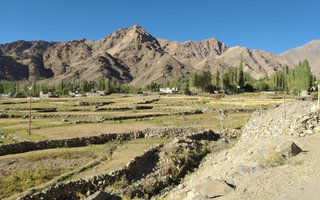 On August 5th 2019, the Jammu and Kashmir Reorganization Bill revoked Article 370 and 35A, splitting the state of Jammu and Kashmir into two Union Territories, Ladakh and Jammu and Kashmir. The Bill went into effect on October 31st. Even as a new political and constitutional system is coming into place, with people, communities, regions and institutions in transition, I decided to travel across the Karakoram, Zanskar and Pir Panjal ranges from Ladakh to the Kashmir and Jammu regions to visit the land and listen to its people. This travelogue is unique, as it goes beyond the rhetoric and binaries often presented in the media to bring forth the voices of invisible people, paradoxical narratives, the complexities on the ground and blind spots that governments often miss out - the people experiencing conflict, and their feelings.

I decided to travel across the Karakoram, Zanskar and Pir Panjal ranges from Ladakh to Kashmir and Jammu regions to visit the land and listen to its people. This travelogue is unique. 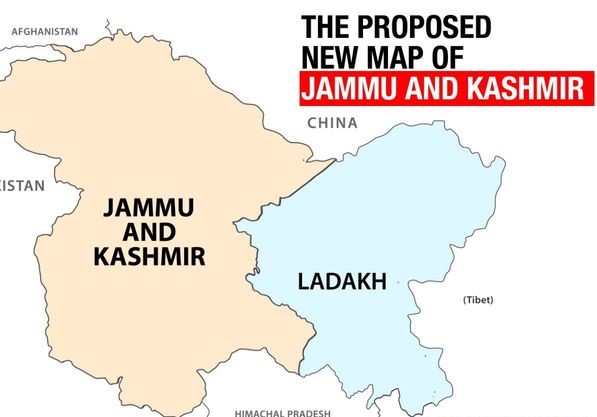 Back in the office, thirty-year-old Disket Choral, who works there as a cook, had moist eyes. She spoke in a whisper, “I am happy about Ladakh getting a Union Territory (UT) status. This is what my father sacrificed his life for…I grew up listening about my father’s cause for Ladakhi’s freedom,” she gazed at his photo hanging in the office and with a barely audible voice added, “Today, it feels like his dream has been fulfilled.” Choral accompanied me to the families of other martyrs in Sankar and Saboo, nearby villages to Leh, now the  capital of UT Ladakh. It was an emotional reunion for all of them.

Kashmir is not the whole of Jammu and Kashmir. Ladakh, with its two districts of Buddhist majority Leh and Muslim (Shia) majority Kargil, administratively governed by Kashmir, is the largest geographical region in Jammu and Kashmir, covering 69.6% of the area with India (1,38,942 sq. km.). However, within Ladakh, the demographic dynamics are complex. Muslims in Leh, both Sunni and Shia, have differing perspectives than the Muslims in Kargil and Noorbaqshi in the Nubra Valley, both residing in towns and villages along the Line of Control with Pakistan. Overall Muslims account for fifty percent of the population in Ladakh. Over the years they have gained an assertive presence in Ladakh, which the Buddhist political leadership can no longer ignore. “Earlier as separate districts the minorities in each district, in Kargil the Buddhist and in Leh the Muslims, felt insecure and discriminated but now within a UT Muslims are equal stakeholders in Ladakh’s future,” pointed out Shafi Lasso, an advocate I spoke to in Leh. He adds emphatically, “As Muslims we will sentimentally always remain connected with Kashmir. Also, geographically we will never be separated from Kashmir. Sentiments of co-religion and trade will always remain strong,” clearly showcasing subtle underlying religious fault lines and tensions between the different faith communities. The districts in Ladakh may continue to coexist despite their differences, yet the fissures and fault lines deepened by the revoking of Article 370 are more visible in Kargil.

Besides a sense of local discrimination felt due to rule in Ladakh centring from Leh, Kargil has affiliations with Kashmir because of several other factors, including road links, co-religionists and geo-political influence. However, it is also the post- re-emergence of the Hindu right-wing party Bhartiya Janta Party, that, according to the Muslims in Jammu and Kashmir, has pushed the community to feel insecure in the new environment. 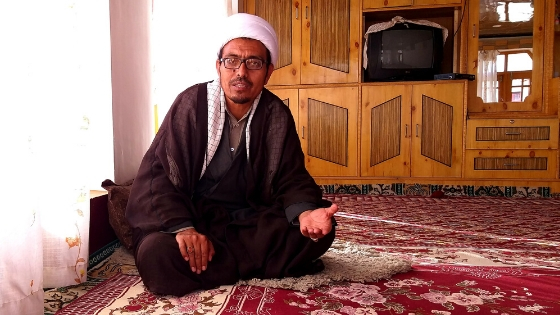 The emerging dynamics in the region can be understood from the interview I conducted with Sheikh Lufti (pictured above), former President of IKMT (Imam Khomeni Memorial Trust) for three terms and now its Advisor. As a representative of a constituency which has a considerable youth following, he said, “We are getting this feeling that being a Muslim is a crime. But we Shias of Kargil are first Indians. We have sacrificed our blood for the country. We fought during the 1999 Kargil war. We know that Pakistan is no option for us for we are aware of what is happening with Shias in Pakistan. But we are feeling disappointed with the Central government’s decision regarding Article 370 and we will never accept it. They should have asked the people of Jammu and Kashmir. Whatever has been done is illegal and unconstitutional. The new disposition has no safeguards for our land and security for the future of our youth. The demand for UT was never our demand. It was a demand of the Buddhists of Leh. We feel sandwiched and in such a situation we might be pushed to taking adverse steps."

Mentioning about IKMT outreach he reasoned that their services to their community like education and health ran parallel to what government was running. “This allows us to think about adopting alternative ways of resistance. India has to think that this is a border region and we are cut off from the rest of the country during the winters. Youth are getting disgruntled and are demanding their rights. These sentiments should not be overlooked for the sake of preventing future conflicts,” clearly indicating a choice they will be pushed into making if their peaceful voices remain unheard.

To deepen the complexity of the Ladakh region, Muslims from Nubra Valley, especially the Turtuk sector who belong to Balti culture and Noorbakshi faith, have deeper ties with the Gilgit Baltistan region of Pakistan. This sector in Ladakh offers geo-political corollaries and complexities that form the root of conflict with Pakistan. As Turtuk’s Sarpanch Inayat says, “In 1947 we got independence from the British, in 1971 from Pakistan and now in 2019 from Kashmir."

What does the future look like for the people of Ladakh?

Notwithstanding these uncertainties, efforts to build a new Ladakh is already underway. To begin, a 21-member delegation, including members across administrative, political and religious spectrum, went on a study tour of those UTs in India which have a tribal status to find the best constitutional framework for Ladakh. “For us identity includes our ecology, environment, culture, land and people,” said Rinchen Angmo, Editor Reach Ladakh Bulletin. She was part of the delegation team whose recommendations will be given to the central government. Meanwhile a United Ladakh Front has been formed with a Joint Advisory Council for Communal Harmony. Members of the delegation have been holding public meetings - at times 10-12 in a day - to educate, engage in advocacy and build awareness amongst the people about their findings, framing an inclusive draft recommendation. A twenty-point memorandum has been prepared which includes the signatures of Muslim, Christian and Buddhist organisations, including the Ladakh Gompa Association. 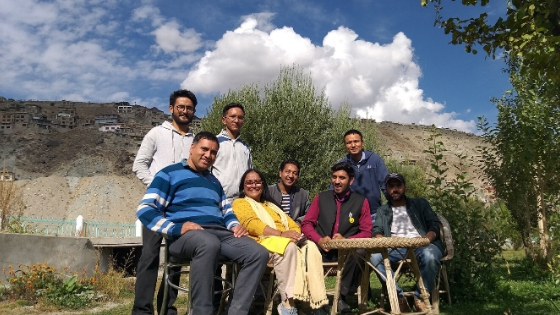 Sonam Wangchuk, a 53-year-old innovator and education reformist known internationally for his Ice Stupa and SECMOL, lists priority concerns for future of Ladakh. “Within Ladakh we should give respect to different parts. We have Dah-Hanu belt who speak a different language and we should support them who they are. The same goes for the Nomads of Changthang and the people of Kargil, Zanskar and Nubra. They should feel stronger about who they are. For this we should not only claim their rights but give them rights too,” he said. He has been supporting and playing a facilitating role, mediating between different organisations and the community leadership. “We have to defend, protect and survive, first, and then we can progress, prosper and develop a vision for the region wherein every part of Ladakh will flower in different colours. Hence our first priority is to take safeguards for the people, land and nature, not only from outsiders but also from the Ladakhis themselves to protect their glaciers, valley, flora and fauna. Both outsiders and the Ladakhis who might become greedy, to exploit resources. Therefore, the need of the hour is to develop a caring attitude to save the Ladakh from Ladakhi greed and other business interests that only care about profit," opinionated Wangchuk, a concern that other parts of Ladakh, whether Muslim or Buddhist, articulate as well. The issue is that communities are fearing and not listening to each other. They only need to listen to each other to discover that all communities have similar concerns and rising anxieties about the future. As a Buddhist businessman, owner of a guest house in Nubra Valley said, “I am glad we are not getting a legislature. Our representatives divide people in the name of Muslims and Buddhist before and after elections. Now that possibility has been erased as we are getting a UT without a legislature.”

"We have to defend, protect and survive, first, and then we can progress, prosper and develop a vision for the region wherein every part of Ladakh will flower in different colours. Hence our first priority is to take safeguards for the people, land and nature, not only from outsiders but also the Ladakhis themselves to protect their glaciers, valley, flora and fauna."

Politics based on demography are essentially about numbers; spiralling fear. In a region where each community fear the political power and control of the other, to recreate a unifying phenomenon that promotes the notion of unity in diversity and co-existence is what the future should usher in for a peaceful Ladakh. However, more than three months down the line, people’s anxieties and concerns have still not been addressed. Central leadership in India needs to address these concerns immediately to quell any disquiet and separatist ideas. People on the ground are beginning to compare this decision to that of attitudes in China towards Tibet. For what needs to be understood is that while Ladakhis are happy with the bifurcation 'azadi' (freedom) from Kashmir, they are worried about the protection of land, culture and identity which Article 370 provided. “It is a historical development. Ladakh has a place under the sun. Undoubtedly while we are happy about bifurcation, but Article 370 was the mother of all safeguards. We need to ensure that some aspects of the legacy continue for safeguarding Ladakh,” cautiously articulated Ambassador Phunchok Stobdan. This is what needs to be addressed for Ladakhis who are beginning to feel ‘colonised’. These are warning signals and if people’s sense of alienation is not addressed we have seen all over the world that it often swells into fully-fledged conflict.

Culture, media and advocacy Environmental peacebuilding Human rights Governance
Disclaimer: The views expressed in this article are those of the author and do not represent the views or position of Peace Direct.