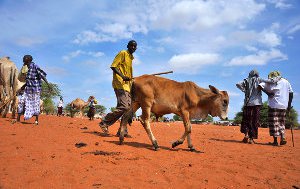 The Lamu Port and New Transport Corridor Development to South Sudan and Ethiopia (LAPSSET) project is a transport and infrastructure project involving Kenya, Ethiopia and South Sudan. The project is bringing together stakeholders and actors drawn from a wide range of investors, donors and funders; among them governments, the UN, bi-lateral multilateral, private, civil society and humanitarian agencies. It will be implemented in a region including some of region’s most fragile zones, in which the effects of climate variability and climate change have had a big impact and where poverty rates are among the highest in the three countries.

The majority of communities in the LAPSSET Corridor are migrant nomadic pastoral communities, at risk from natural disasters, drought and frequent conflict.  The frequent conflicts are related to competition over shared natural resources, including water and fodder for livestock. In addition the eastern areas inside Kenya and south-eastern Ethiopia are regions in which al-Shabaab operates, with recruitment of youth contributing to insecurity and conflict. This also contributes to radicalization of some young people with ideologies that promote terrorism.

More account of these issues needs to be taken, in contrast with the largely economic factors driving LAPSSET. These include access to large land areas for economic opportunities and agriculture, the exploration and development of the region’s extractive industry (oil, gas, minerals), transport, energy and other infrastructure projects.

With LAPSSET focusing on different countries, it has the potential to provide a huge social dividend – providing a lasting solution to conflicts. Conflicts in the region occur at three key levels.  First, there are new administrative and political constituency borders with elements that cause community rifts and internal conflicts.  Secondly, cross-border trade in the region facilitates easy access and trading in small arms at a time when young men have increasingly limited employment opportunities has influenced security issues.  Thirdly, there are problems around the international frontiers between all countries concerned, where pastoral communities live across the shared, porous borders. Finally, sectarian polarization and radicalization is spreading from Somalia into the other countries creating instability in the region.

As the LAPSSET Project gets underway, pastoral land is cleared for economic investment.  It is expected that communities and livelihood capitals will be affected and that the potential for cross-border conflict will increase. Appropriate mitigation strategies need to be put in place to prevent this.

There needs to be greater understanding of LAPSSET’s impact on communities. Many communities will no longer have access to land and livelihood assets they owned in posterity after LAPSSET project is developed.  In particular, under the LAPSSET project, the aspect of access to livelihood assets in posterity at household and community level as a dimension has not been included in LAPSSET’s feasibility and environmental impact studies.  Only a small part was alluded to for the purpose of allocating (usually meager) compensation.

There needs to be greater understanding of LAPSSET’s impact on communities.
Similarly, historical land and development injustices of the past affecting the region have not been explored. These must be taken into account given the project’s scale. The information available to local communities in order for them to understand their position in the context of LAPSSET and alternative livelihoods following change of land use must also be improved.

Part of this awareness creation process should involve civic awareness initiatives that embrace sustainable dialogue of users with communities. Such dialogue would provide proactive information sharing on trends in shifting pastoral livelihoods, and the explanation of exposure to vulnerability. An assessment of the level of information and knowledge communities have in relation to the design, development and impact of LAPSSET is imperative.

Livelihoods – an opportunity or a cost?

LAPSSET will interfere and change livelihoods and access to livelihoods assets at community level. The compensation it provides does not address the long-term needs for any of the communities dispossessed of land, water and other natural assets.  The low level, indigenous use of land, based on traditional practices, does not in itself undermine the national economy, even though it prevents land from being used for other economic purposes. Its value has been that of preserving natural biodiversity and conserving land that has provided livelihoods for these communities for centuries. But once such land has been taken over for alternative economic development, such livelihoods will no longer be possible.

The immediate fist level jobs available in LAPSSET will be different from what communities were used to, and the skills required will demand literacy and education to which community members in the corridor have limited access. Other large infrastructure projects in East Africa have seen the majority of initial and second-phase jobs go to individuals from outside of the local communities. Due to the nature of advanced skilled jobs in extractive industry, technology etc. this will exclude not only local communities but also other nationals in each country; to whom education and training has not been provided.

Second-level opportunities such as local informal trade and business will also not immediately benefit local pastoral community members, who lack capital and access to credit meaning they will be late to market.  The types of jobs, and businesses most likely to supplement the lost livelihoods of the LAPSSET corridor need to be explored through a systematic survey of employment opportunities by type of labour available, locality labour is needed, types of competencies  and potential employers/job creators. Long-term projections would also be useful to determine and prepare responses for communities at risk.

Plans for disaster reduction response in localities falling under the LAPSSET Corridor are implemented under some department in each country. However, such departments are hard strapped with capacity for service delivery, even though they have a strategy. Cursory review of such strategies and plans denotes that here are gaps on how to engage and prepare local communities for addressing peace, early warning and preparedness for disaster response. This understanding is vital.

An uncertain future for those in LAPPSET’s path

This includes undertaking studies on peace pillars in the region among local communities, as well as raising and addressing risks undermining peace in the region, where pastoral communities are already struggling. Issues around climate change and access to resources need to be properly addressed. Long term plans for how to appropriately integrate local groups into relevant value adding aspects of the LAPPSET Corridor initiative need to be created. And cross-border issues need to be better analyzed and documented, in order to forestall conflict.

Doing this sensitively will be adding value, meaning everyone will be in a better position to make the most of the opportunity that LAPSSET Corridor Project presents for enhancing peace. 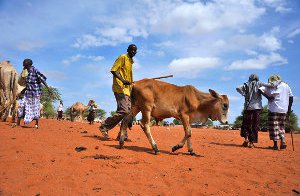 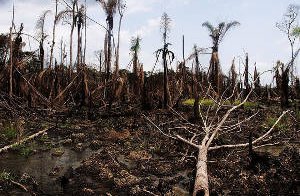