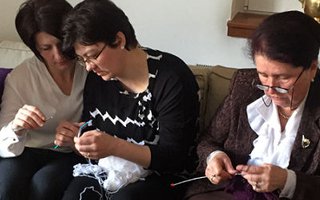 As in many post-conflict societies, Bosnia-Herzegovina performs poorly when it comes to gender equality. Traditional and patriarchal norms and values, compounded by a legacy of war, inhibit women from taking an active role in public, social and economic spheres, particularly in rural areas.

Gender inequality, combined with other social exclusions, can make women extremely vulnerable. Victims of sexual violence, whether it is violence that occurred during the war or in domestic settings, face special challenges. Twenty years after the war, being a victim of sexual violence, or talking about being a victim, remains a social taboo, causing victims to suffer from high levels of stigmatization.

There are many ways to help others, but perhaps the best way is to teach people to help themselves
Though there are different forms of traditional assistance available to women in Bosnia, especially for those who have suffered violence, this assistance is typically based on small monetary handouts from the State, international institutions and/or various NGOs.

This monetary aid is helpful in times of crisis but, as Nadira points out, the aid keeps women in a position of victimhood. The aid does not empower women psychologically or financially in the long term because their well-being remains dependent on others. By providing women with work, Udružene gives them independence and the opportunity “to rebuild their life, to stand up, by themselves.”

The idea for the project came from the observation that almost all women who suffer from exclusion and who struggle to find a place in society know how to knit. So why not use this skill to empower them?

When the project started, the Norwegian Embassy supported the idea and helped turn it into a reality. According to Vibeke Lilloe, Ambassador of the Kingdom of Norway in Sarajevo, “the best way of helping these women is to reintegrate them into society, and the best way of doing that is to secure paid work for them. Indeed, holding paid positions gives these women a new sense of self-respect and a feeling that they matter.”

The women who work with Udružene have different stories. They come from all parts of Bosnia-Herzegovina. Some were directly affected by the war, when sexual and other forms of violence in and outside the camps were used as a tool of war. Some have suffered from domestic violence. Others are simply looking for a way to gain fiscal independence, such as rural women who can find it difficult to find stable employment.

Regardless of an individual’s background, any woman with a willingness to gain control of her life is welcome to work with the organization.

The women take pride in the knowledge that their work could end up in a shop in Paris or Vienna
To start, women must first improve their knitting skills. According to Nadira, this step is one of the most important and difficult: “It’s not easy to make these women understand that, yes, they have a basic knowledge of knitting, but they need to professionalize their skills to be able to knit specific designs, which can require technical expertise. Once they understand this, the other challenge is to help them overcome their fear of failure and help them to believe that they will succeed.”

This requires building the women’s self-confidence and trust in themselves and their abilities. Consequently before women work with the organization, Udružene provides training sessions in Sarajevo and in different villages around city.

After several training sessions, the knitters are ready to begin work at a place and pace of their choosing. Given that items vary in complexity and retail price, women pick the styles of pieces they wish to make. From sweaters and cardigans to hats and scarfs, women choose the type as well as the number of garments they wish to knit. They can work from home, or come to the Sarajevo office and knit in the company of other women. Although these options can sometimes make it difficult for the management team to ensure that orders are completed on time, the freedom the women have to work at their own level of comfort is something that Udružene is not willing to compromise on.

While studies have not been done on the psychological benefits of knitting, it is often compared to yoga. Women have reported to Nadira that their work is therapeutic, that the repetitive and rhythmic motion of knitting is calming, and that focusing on details and patterns keeps their minds free from other concerns. For instance, one of the women confessed to Nadira that, since she started working for Udružene, she has been able to stop taking her medication for depression.

In addition to these benefits, there is the psychological impact of fiscal independence. When women realize they can make a living by knitting garments, they become more confident, report higher levels of self-worth and feel more in control of their lives.

Lastly, women who knit for Udružene are not simply working – they are using a high level of craftsmanship to create beautiful garments. Designers from around the world value their skills, and the women take pride in the knowledge that their work could end up in a shop in Paris or Vienna.

Three years into the project, over 300 women have been trained to produce high-quality knitwear that is sold internationally and the project is now self-sustained. Because all profits go to them directly, approximately 150 of the women are able support themselves and their families entirely through this work. Nadira observes that Udružene provides an environment where women can “re-engage in everyday life through creative work and personal engagement.” Their skills have been turned into a profession, which gives them a sense of confidence and self-worth.

There are many ways to help others, but perhaps the best way is to teach people to help themselves. This is what Nadira Mingasson and her staff at Udružene are doing for women throughout Bosnia.

Balkan Diskurs is a non-profit, multimedia platform created and run by a regional network of journalists, bloggers, multimedia artists, and activists who came together in response to the lack of objective, relevant, invigorating, independent media in the Western Balkans.
Read more from Balkan Diskurs
Disclaimer: The views expressed in this article are those of the author and do not represent the views or position of Peace Direct.