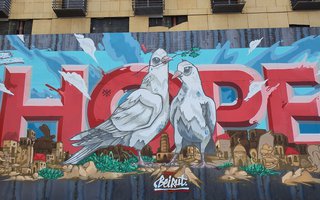 It has been over a year since the revolutionary spark of October 17th took over Lebanon. It has been a heavy and difficult year marked with growing economic collapse, widespread oppression, revolutionary fatigue, the dangerous outbreak of COVID-19 and, most importantly, the deadly Beirut blast of August 4th, 2020.

The immense challenges already facing the peacebuilding community in Lebanon are ever increasing. The blast has affected peacebuilders like everyone else; some lost friends and their properties. No one was prepared to handle the aftermath of the blast, even for veteran peacebuilders who worked for peace during the notorious civil war.

From her own experience in the field, Shirine Jurdi, a feminist activist specializing in peacebuilding and gender, thinks that peacebuilders quickly transformed their devastation into action. They reached out to the international community, lobbied and raised awareness among partners overseas about the Lebanese population’s right to protection against criminal negligence, and advocated for urgent international help before interest was lost and shifted to another cause. She believes that the peacebuilding done following the blast was to respond to the basic means of survival and offer compassion - meaning pre-planned projects were put on hold. She adds that, while doing so, peacebuilders realized that working for change is not a luxury anymore, nor a step by step process; it should be holistic now more than ever.

Interestingly, peacebuilders weren't the first to rush to ground. Lebanon’s amazing young people showed up early in the morning on August 5th, cleaning up and providing help in every possible way. Their move was spontaneous; motivated by sympathy and patriotism. Those in their teens and twenties - widely perceived to be detached from all national causes and only interested in partying - proved everyone wrong on two fronts; firstly, when they remained at the forefront of protests since October 2019 and defied outrageous oppression; and secondly after the Beirut blast.

Lebanon’s amazing young people showed up early in the morning on August 5th, cleaning up and providing help in every possible way

These youth, along with civil society and peacebuilding organizations, divided themselves into task groups assuming the role of ministries. Volunteers from different backgrounds and with varying skills provided food and medical assistance, as well as legal and construction support. Their activism formed a de-facto shadow state amid the shameful absence of governmental agencies in the increasingly failed system suffocating Lebanon.

With the outbreak of the pandemic earlier this year, local peacebuilders had the chance to prove their work was not elitist, but complementary to volunteering, social solidarity, and community service. These additional efforts proved to be more than necessary after the blast. The scale of work expanded further to encompass relief efforts, reconstruction, environmental action and psychological counseling. The new-comers to the field; including doctors, psychiatrics, teachers, students, architects, artists and lawyers; organized themselves into associations. They didn’t wait for the necessary official permits, mainly the documentation requested by the army in the aftermath of the explosion. They had no time for useless paper-work!

with the outbreak of the pandemic earlier this year, local peacebuilders had the chance to prove their work was not elitist, but complementary to volunteering, social solidarity, and community service

I know volunteers with expertise in journalism, medicine and engineering who established an association to be able to receive donations from the Lebanese diaspora, especially in the wake of the growing banking restrictions. They worked in restoring houses in their neighborhood, using their own savings. Shortly after the blast, I was asked by peacebuilders and human rights defenders from several nationalities residing in Egypt and the UK to connect them to organizations working on the ground so they could send money. I suggested this group of trusted people because I knew they needed support. Those wishing to give said they preferred associations; I think they assumed they would be more credible than individuals. So I told my friends to organize their work into some kind of preliminary entity to get donations and work freely on ground without being questioned by the authorities. This didn't necessarily make things easier. Ironically, there is a political skepticism about the recently established associations and their funding. It is ridiculous that NGOs are perceived by parties' loyalists as puppets of foreign actors. This claim is unfair and misleading. It is outrageous that the corrupt system, whose lack of credibility is affecting the flow of international aid, doubts the integrity of the people who stood by their devastated compatriots!

Despite these heroic contributions seen on the ground, it is clear that the struggle to get support where it is needed most continues, and gets harder with heavy rainfall. Four months after the catastrophe, most survivors are also faced with the challenges posed by their shattered houses and physical and emotional scars. The efforts and activism seen at the grassroots are monumental, but they are not enough; the state is missing and missed.

Despite these heroic contributions seen on the ground, it is clear that the struggle to get support where it is needed most continues, and gets harder with heavy rainfall

Nothing can substitute the need for an active state, thinks Jurdi, especially when "the state is idle even on the simple level of comforting its devastated citizens". Although she argues that the blast exposed the absence of government accountability, the rule of law, security and crisis management, she asserts that activists and peacebuilders cannot, by any means, replace the role of an accountable, secular and inclusive state; and they should not assume that they ought to. Therefore, in her view, it is impossible to conduct peacebuilding work without the belief in a state and its institutions, as well as the concepts of security, equality and justice. Furthermore, peacebuilding in Lebanon, she thinks, is more than ever related to the pillars of human security and the basic right to live in dignity.

Peacebuilding and the revolution

Asked about the role of the peacebuilding community in the fading revolution, Jurdi says that the objectives must be to establish a modern, inclusive state free of corruption, and to defend the rights of women and marginalized groups, including refugees and migrant workers. These, she said, are among the key duties of peacebuilding.

In addition, the blast reminded many in Lebanon of why they have been on the streets since last October, seeking justice and accountability. For Jurdi, therefore, the need for fundamental change in the governing system is more pressing than ever, as well as collective work for peace.

I believe that the revolution produced an unprecedented momentum of national unity that crosses sectarian lines. Peacebuilders have channeled the revolutionary euphoria to expand the impact and energy of their work. One year later, one cannot deny that the pulse is weakened, but not dead. It is time to fight the revolutionary fatigue and re-think the revolution to evaluate what went wrong and why, especially since the confessional fault lines are still strong among sectarian parties' loyalists.

I believe that the revolution produced an unprecedented momentum of national unity that crosses sectarian lines. Peacebuilders have channeled the revolutionary euphoria to expand the impact and energy of their work

On October 17th 2020, the anniversary turned into yet another commemoration of the explosion's victims. This is perfectly understandable, as the country is still traumatized by this massive crime, and the revolution sought from its early days to end the impunity that has cast a shadow on Lebanon for many long years.

To avoid disappointment, I returned to the revolutionary squares with low expectations. I was happy to recognise some people I had seen there over the past year. I don't know them, they don't know me, we just met there over and over, and our faces became familiar. I’m sad to admit that at least two female friends who were on the frontlines have now left the country for good, after being assaulted and beaten. Ironically, we all believed in the revolution but these two were the most hopeful. And here I am, months later, missing them. Those huge crowds were also missed.

We should accept the fact that fundamental change requires patience and planning, and that demonstrations are not the only way of protest and pressure. Peacebuilding, in all its guises, might be an interesting and hopeful addition. It shares the objectives of the revolution and is well rooted in communities and grassroots action. It is time for revolutionary peacebuilding.

Development Health and counselling Transitional justice and reconciliation Children and youth Human rights Governance
Disclaimer: The views expressed in this article are those of the author and do not represent the views or position of Peace Direct.