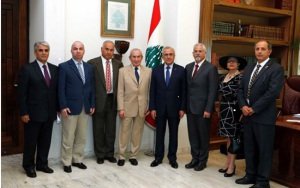 The steering committee of the LDC, and former Lebanese President Michel Sleiman (fifth from left)

In summer 2013 an ambitious new initiative began in Lebanon: “Lebanon: Land of Dialogue Among Civilizations and Cultures” (LDC).

Founded by Lebanese businessmen and academics, its goal is to achieve UN recognition of Lebanon as a place where people and ideas meet. It is inspired by the address of former Lebanese president Michel Sleiman to the UN General Assembly in 2008, in which he said that the "the philosophy of the Lebanese entity is based on dialogue, reconciliation and coexistence". He declared that the Lebanese people would like their country to "become an international center for the management of the dialogue of civilizations and cultures, and consequently a global laboratory for that inter-entity dialogue".

Sleiman took his motivation from a similar declaration made 11 years earlier by Pope John Paul II, who said that Lebanon was "more than a country." It is a mission of love and conviviality. Much of this vision has also been articulated in the writings of the late Muslim scholar, Ayatollah Muhammad Mahdi Shamseddine. And in September 2012, religious leaders at a Muslim-Christian summit at the Lebanese Maronite Patriarchate at Bkerke called for the designation of Lebanon as "space of dialogue among civilizations based on peace and diversity".

The initiative, housed at Notre Dame University-Louaize, is being implemented by the Council for Research in Values and Philosophy (CRVP), an international academic NGO based in Washington.

So far, it has reached out to the UN in New York and Unesco in Paris, calling for Lebanon to be officially designated as a Land of Dialogue, as well as to the Lebanese people, both in Lebanon and abroad, especially in Latin America. The next stage will be to secure the support of expatriate Lebanese in the US, Canada, Australia, the Arab Gulf countries, Europe and Africa.

With Notre Dame, the initiative has organised conferences on religion, civil society and interreligious dialogue. In December 2013, it co-sponsored an international conference in Sao Paulo:"the dialogue of civilizations, emphasis on Lebanon". A second conference is scheduled for November 2014 in the Brazilian city.

This follows up on a previous meeting to honour the Nigerian novelist and poet Chinua Achebe, which focused on the links and common ground between the Nigerian and Lebanese people, in particular the religious diversity of both countries and the lessons they have learned from civil wars.

The LDC also plans to reach out to the Vatican as part of its long-term mission to gain permanent observer status at the UN.

Ultimately, its objective is to become a permanent forum for dialogue among and between cultures, faiths and civilizations, building a centre which would host a Church, a Mosque and a Synagogue. This would be a unique centre in the Middle East, combining all three faiths to provide a platform to promote peace and reconciliation.

It would host international seminars and research workshops as well as supporting a wide range of religious, ethnic, racial and cultural dialogue activities, including those of other local, regional and international organisations that promote dialogue.