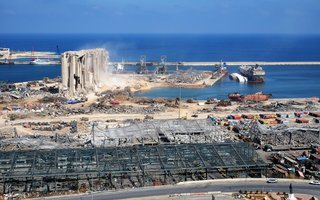 Photo by rashid khreiss via Unsplash. Port of Beirut Explosion, taken days after the explosion from an adjacent building.

A few hours after the devastating blast on August 4th, 2020, my Syrian friend called to check in on me.

He offered to host me at his house in a mountain village outside Beirut. It meant a lot to me, especially given his own vulnerable security status in Lebanon.

Several Lebanese recounted that Syrian workers drove them to hospitals. A Syrian activist told me he rushed his bleeding neighbours to get medical assistance before helping his own cousin. He said a hospital refused to admit him because of his nationality. When he noticed my anger and shame, he tried to play down the situation: "My cousin had superficial cuts on his hands. We found another hospital where he was treated without discrimination".

On the other hand, Syrian refugees with medical expertise immediately volunteered to donate blood. They set stations to bandage wounds and provide non-prescription medicine. They offered their experience in dealing with health emergencies in the battered, bombarded cities back home, as well as serving their underprivileged community in Lebanon. A young female who was with them told me they were generally greeted with compassion and gratitude, which gave her a sense of worth.

Other Syrians took part in disaster relief and fundraising campaigns.

Syrians came second to Lebanese in terms of human losses. Sadly, many escaped death in their country to then face it in Beirut's rubble. To others, the city is the only home they know now. Sama (meaning sky in Arabic) is beautiful like clear blue skies. She celebrated her sixth birthday two weeks before the explosion. She lost her left eye. Two months after the blast, she got an eye transplant thanks to a generous donor from the United Arab Emirates. It was a crucial step to restore her self-confidence. She says she wants to become a doctor to help children and drive an ambulance. Bissane too had that dream. She was playing at home with her brother when the blast occurred. She succumbed to her injuries a week after the blast. She was only seven. Her devastated father, Samer from Idlib, thought she would be safe away from the Syria they left in 2015.

Sadly, many escaped death in their country to then face it in Beirut's rubble

Rawan Misto worked as a waitress to support her family. She was 20 years old and spent her life in Lebanon after her mother moved there in 1997. She too was killed by the blast. Being Syrian, her family members couldn't find a place to bury her. They were asked to pay a large amount of money to buy a grave plot. Volunteers collected the sum to honor the young woman. Unfortunately, Syrians in Lebanon suffer even after death. At the very least, one would have expected the greedy clergy to show some mercy and offer Syrians free graves!

Hafez Karam didn't die in the explosion but I still consider him as one of its victims. A teenager of seventeen years old, he was financially dependent on his father working in Lebanon. More than a month and a half after the blast, his father was still missing. He was just a number in the official Lebanese records; but he meant the world to his son. On September 23rd 2020, Hafez committed suicide in Hama, Syria, out of sadness and despair. The fate of his father remains unknown, even almost a year after the explosion. 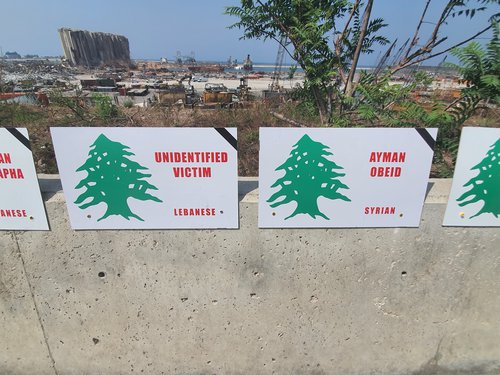 Many Syrians reported that the scale of the blast's devastation was a painful case of déjà vu. They lost everything, again. Mental health support was provided to some; others deserted Lebanon for good. A Syrian activist I know moved to Egypt recently. She said she had experienced enough traumas and had to save her sanity.

Syrian survivors complained of discrimination in aid. In the wake of the explosion, a video featured a man telling people seeking relief packages that only Lebanese were entitled to receive help. What arrogance, especially since the materials were provided by Saudi Arabia and were supposed to reach everyone in need. Unfortunately, it wasn't an isolated incident. A Syrian told me: "We are last class humans. The explosion turned us into second class victims".

A Syrian told me: "We are last class humans. The explosion turned us into second class victims"

Ten days after the blast, an army officer was at my door offering a donation box from Kuwait. My first reaction was to tell him that other people needed it much more than me. Then I decided to give it away myself. I asked if refugees were on their lists. He said no and suggested I donate my share to Syrians and Palestinians, which I did.

Unfortunately, it has become the norm to neglect refugees and migrant workers. Two Syrian workers passed away because of an arson attack at the start of the October 17th 2019 revolution. When the martyrs of the uprising are mentioned, including those who died in accidents, Ibrahim Hussain and Ibrahim Younis remain unaccounted for. Like their counterparts who lost their lives in the explosion, they ended up dead and forgotten in Beirut.

Ironically, amid the outrageous absence of governmental agencies, Syrians took part in rebuilding Beirut. A Syrian worker fixed my blown windows. He was efficient, sympathetic, and charged very reasonable fees.

As a result of the calamitous economic and psychological effects of the blast, an American journalist interviewed me on the growing racism towards refugees. I expected that some frustrated Lebanese would target refugees as scapegoats instead of revolting and pressing for justice and accountability.

Refugees are physically harassed in systematic and organised retaliations. In November 2020, a Syrian man had a fierce fight with a Lebanese man and killed him in Becharre, a Christian mountain village in the North of Lebanon. Relatives of the deceased wanted to murder the guy instead of putting him on trial. Syrians in the town –––agricultural workers and not an economic burden– were subject to a collective reprisal, their modest houses set alight.

The same tragedy was repeated a month later. After a dispute with Syrian refugees, several angry Lebanese men torched several tents at an informal refugee camp in Al-Minyeh Muslim district in the North.

In that area and in several Lebanese towns, Syrian refugees reported being subject to threats, harassments and intimidations in May 2021 as part of a concerted effort to pressure them into voting for Syrian president Bashar Assad.

Moreover, hate speech is spread through social media messages calling to exclude Syrian refugees from the national vaccination campaign for COVID-19. Officially they are not left behind but requested to provide legal residencies, a condition that puts many at risk of deportation. With time, the vaccination process has become more accessible to them. I know many who have had their jabs. I don't credit the corrupt and racist establishment however, but the World Bank and several UN agencies for ensuring that Syrians, Palestinians and migrant workers have equal access to vaccinations in Lebanon.

Syrian peacebuilder Shadi Azzam of Nuon organisation shared a holistic perspective. He told me the entire Lebanese system is ailing; and "racism is not new, it is a tiny part of the complicated broader picture, and it is easy for everyone to blame refugees for the overwhelming collapse although they are not responsible for massive electricity cuts and horrible economic failures". He believed that the "explosion was a catalyst to blow away the old dysfunctional Lebanese system with no substitute on hand, and the Syrians trapped within are a minor detail, collateral damage".

He was keen to highlight that many people still denounce racism, both verbally and in practice, such as Bcharre's mayor who helped many Syrians escape persecution. However, he admitted it is not safe anymore for people like him to work with fellow refugees, because "Lebanese themselves are not secure and lack protection, and Syrians are more exposed and at risk". He spoke about the arbitrary arrests of young Syrians and forced deportations that have continued since the blast, endangering people's lives and futures. It went unnoticed, and so no one objected. He said that "Lebanese peacebuilders and human rights defenders are running out of resources and are increasingly occupied with their country's catastrophic situation".

Azzam also noted that many Syrians left Beirut to other areas seeking physical security and lower rent, despite the fact that "the whole of Lebanon is not safe anymore". Although he could somehow understand a poor Lebanese getting angry with an equally poor Syrian, he despised populist politicians for using racism to cover up their corruption. He reiterated that he wanted to focus more on positivity, recalling that many Lebanese were tolerant when they were more financially prosperous, and some remain compassionate no matter what the circumstances.

However, in his words, he is saddened by the vanishing of "the old Lebanon" that used to be a haven of freedoms and rights for oppressed peoples in neighbouring countries. I share his grief. It is true that Lebanon is a failed state, yet it is much worse to watch the failures of some members of society in showing sympathy and humanity. We should not surrender to that despite the chaotic collapse of our citizenship, state protection, the health and education system, our currency, and much more. Racism is never accepted and can never be justified.

However, in his words, he is saddened by the vanishing of "the old Lebanon" that used to be a haven of freedoms and rights for oppressed peoples in neighbouring countries. I share his grief

Sawssan Abou-Zahr is a Lebanese journalist, editor and consultant. Sawssan is Peace Direct's Local Peacebuilding Expert in Lebanon.
Read more from Sawssan Abou-Zahr
Disclaimer: The views expressed in this article are those of the author and do not represent the views or position of Peace Direct.