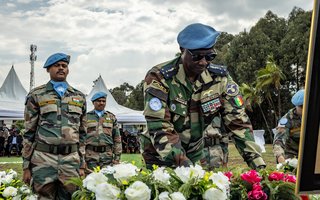 As soon as new clashes between the Congolese army and M23 fighters broke out in Eastern DRC, the government pointed the finger at Rwanda, accusing the country of supporting the rebels. These accusations have always been denied by Rwanda and have led first Angola and then the East African Community (EAC) to initiate urgent mediation.

Fearing a new escalation of regional violence, the seven member states of the EAC agreed in April to deploy a regional force in Eastern DRC. In mid-August, a first contingent of Burundian soldiers under Congolese command was deployed in South Kivu, followed by another Kenyan contingent of 900 soldiers who arrived in Goma on 13 November.

Eventually, the sub-regional force will bring together between 6,500 and 12,000 soldiers with the aim of ’containing, defeating and eradicating negative forces’ operating in the four provinces of Eastern DRC – namely North Kivu, South Kivu, Ituri and Haut-Uele. It will join the 1,700 Ugandan troops deployed since November 2021 to hunt down the Allied Democratic Forces (ADF), whose results remain mixed one year later.

While some see this deployment as a glimmer of hope for ending the violence that has long plagued Eastern DRC, many remain sceptical. This is not the first time that foreign forces have intervened on Congolese soil.

All the new troops come in addition to the 14,000-strong UN peacekeeping mission (MONUSCO), which has been present since 2000 but has not yet succeeded in restoring peace.

The failure of the military approach can be explained in part by the fact that such missions do not address the root causes of land, identity and community conflicts. Nor do they sufficiently involve the local population in the push for peace.

As long as local people are not at the centre of peacebuilding processes, the sustainability and above all the ownership of the peace will remain transient.

The centrality of civil society in addressing recurrent conflicts

Indeed, it is the local population, more specifically local peacebuilders, who must be at the heart of any action to restore regional security, peace and social cohesion. Unfortunately, these actors do not have sufficient means and capacities to accomplish this noble task.

Today, investing in such initiatives provides excellent opportunities to work with actors at the heart of the conflict. They understand the conflict’s context and dynamics better than others. And they can provide a rapid and flexible response to resolve conflicts, save lives, and ease tensions until diplomatic efforts and high-level negotiations are completed.

Strengthening local governance and supporting the efforts of local peacebuilding actors in the Great Lakes region, whose strengths are no longer in question, should be the number one priority – not only of the governments concerned, but also of the UN and other international organisations concerned about the recurrent insecurity and instability.

Despite the hostile security context and the risks involved, civil society organisations working in the field of peacebuilding are not sitting idly by. For example, the SPR Grands-Lacs (Synergy of Women for Peace and Reconciliation of the Great Lakes of Africa), carries out awareness-raising and capacity-building activities through the Women, Peace and Security programme called "MANU: Mwanamuke Amani na Usalama" in Swahili. It also supports advocacy and lobbying of duty-bearers on peace, the participation of women in conflict resolution and decision-making bodies, and the protection of human rights defenders.

Bénévolat pour l'Enfance and AIDPROFEN, for their part, jointly strengthen the capacities of community governance structures set up in the city of Goma, the territory of Masisi, Nyiragongo and Rutshuru on the so-called "Common Ground" approach. The focus is on collaboration and dialogue as mechanisms for improving relations between communities. This approach teaches governance structures how to: prioritise collaborative and inclusive methods, develop active listening, combat inhibitors of empathy and find common ground in conflict resolution and peaceful cohabitation.

The multiplication of foreign military interventions in eastern DRC will not solve the persistent security problem that has lasted for almost three decades. As long as the role of peacebuilders is not recognised and valued, efforts to bring about peace and resolve conflicts are likely to be in vain.

The enormous funds mobilised to deploy military missions should rather be reinvested in strengthening the action of local actors, whose effectiveness and relevance are not in question.

Marius Ruhanamirindi is Peace Insight’s Local Peacebuilding Expert in the Democratic Republic of Congo (DRC). Based out of Goma, Marius works as a Consultant at the Peacebuilding Support Office in the DRC (Bureau de soutien pour la consolidation de la paix en RDC). He has previously worked as a Project Consultant with Oxfam GB on their joint programme against gender-based violence from December 2019 to December 2020. He was also a Project Coordinator for the promotion of peace and social cohesion by young people within the national NGO Bénévolat pour l'Enfance in the DRC for more than 3 years.
Read more from Marius Ruhanamirindi