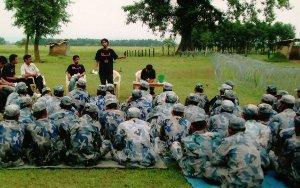 Nepal is a diverse country - economically, culturally and geographically. It has over 100 ethnic castes speaking more than 90 languages in a population of 29 million. The economic disparity is huge between those living in the cities and the rural areas of this landlocked country in South Asia.

Even though Nepali language is spoken widely, people in different areas do not always understand the language. They may even prefer not to speak it. All of this accentuates the importance of a ‘local first’ approach to problem-solving. Even organizations operating at a national level, and based in the capital city Kathmandu, are often forced to adopt a local first approach.

Alliance for Peace (AfP) Nepal is based in Kathmandu. It was established in 2002 by a group of young people and students. AfP Nepal’s key areas of involvement include democracy strengthening, human rights, peacebuilding and conflict transformation with gender mainstreaming and a conflict sensitive approach as cross-cutting issues. What began in 2002, as a group of like-minded students and youths meeting in a coffee shop talking about the spiraling violence in the country, has matured into an organization for the youth, consisting of dedicated professionals committed to creating a better future for all Nepalese youth.

When AfP Nepal works out in the districts doing peacebuilding work, we always partner with local organizations. In such a diverse country, no matter how much experience, knowledge and expertise one has, there will always be circumstances where those on the ground will be able to handle a situation better. In the sensitive field of peacebuilding and conflict transformation, it is better to utilize local knowledge and experience rather than going in with a prescribed set of ideas and interventions that have worked somewhere else and that one hopes will work there as well.

In ethnically diverse countries with a wide strata of socio-economic levels, how do local interventions fare compared with interventions that have been parachuted in from other countries?

Let me give the example of one of our projects: Youth Peace Dialogue Centers. First we meet with young people from local communities. Then together we identify issues that tend to breed conflict and violence, before trying to address them via specific interventions. We begin by providing the young people with skills on conflict transformation and peacebuilding. They are also tutored in dialogue facilitation and mediation. When we have enough young people in a community trained, we help them set up a Youth Peace Dialogue Center.

These centers are a space for young people to come together and discuss ways and means of resolving conflicts. They also utilize their time in a positive manner - identifying, drafting and implementing action plans necessary for their community. These centers may sound like big institutions, but they are more likely than not one-room facilities with books, a computer and various other resources necessary to keep young people positively engaged.

The most important lesson we have learned is that young people have a lot of knowledge and experience about their communities which results in them resolving conflicts in innovative ways. A peer learning set up also operates, where youth sit around and talk about issues whilst someone else guides them in resolving issues. In the end, and significantly, these local interventions impact directly on peacebuilding at a local level.

Most countries of the south rely on aid from developed countries to deal with post conflict recovery. It would not be incorrect to say that peacebuilding in most developing countries is conditional on donor fund availability. Unfortunately, donor priorities are often at odds with the needs of countries transitioning to peace. Furthermore, in the global south, the donor community is not always a homogenous group with similar and comparable goals.

Competition amongst donor groups often paralyses peacebuilding processes rather than supporting and promoting them. In developing countries where the government and bureaucratic planning process is weak, the entire policy paradigm falls prey to an ambiguity created by donor competition which results in confusion within government regarding decision-making on policy.

In general, there has been a tendency to devalue local skills while importing comparative practices from other countries and so-called experts. Not only are experts who are drafted in for their technical expertise expensive and lacking in local knowledge, they also reduce the chances for organizations to develop local capacity which could better serve long term strategic interests.

‘One size fits all’ peacebuilding does not work

Furthermore, when donors spearhead peacebuilding processes it is often seen as interventionist, and when these are defined by parochial political and economic vested interests, efforts at peace tend to turn into reasons for conflict. When capable and skillful people live comfortable lives in the capital city, local structures often suffer from a number of problems. These include chronic shortages of resources and skilled manpower, a lack of clarity in operational structures, political manipulation with very little monitoring from central government, and a failure to deal with conflicts directly.

In most conflict prone countries, the urban/rural divide is so big that a uniform ‘one size fits all’ approach to peacebuilding does not work. A case in point is Nepal’s Ministry of Peace and Reconstruction. Whilst it was established at national level with funds from various donor groups, the all-important Local Peace Committee structure has ended up virtually inoperable and dysfunctional.

The ministry has been plagued by numerous problems, including a weak enforcing mandate, limited resources, political interference with regard to the appointment of senior staff, plus a lack of synergy with existing local bureaucratic mechanisms such as Village Development Committees. Without greater recognition and prominence given to local skills and local peacebuilding, conflict resolution will continue to frustrate and disappoint communities in Nepal.

Dipendra Tamang is the President of Alliance for Peace (AfP), a non-governmental organization working to bring peace, democracy and development to Nepal. His area of expertise covers youth rights, focussing on conflict resolution and post conflict recovery studies, entailing conflict transformation and peace building. The main purpose of AfP Nepal is to build sustainable peace and promote political participation and representation within the country. Previously, Dipendra worked with the National Democratic Institute (NDI) on its civic education, voter education and public opinion polling programs.
Read more from Dipendra Tamang 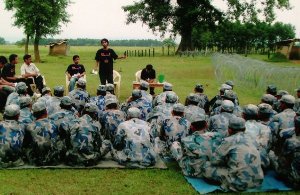