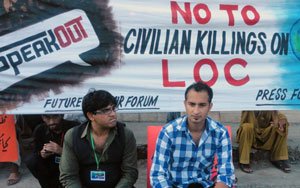 A young Kashmiri girl explains tragic details of the loss of her father who was killed in recent mortar shelling in Kashmir frontier.
Aniela’s dreams were shattered on the tragic night this passionate little girl saw her father dying before her helplessly.
Aniela, a 14 year old schoolgirl, was jubilant over her success in the final exams. Her eyes glittered with passion and thirst for higher education.  Her proud father promised to full cost of her time at college. Though, he was already struggling to balance his small income with rising family spending.

Aniela’s dreams were shattered on the tragic night this passionate little girl saw her father dying before her helplessly.

Her father - Zubair Ahmed, 47 - had become the latest victim of the conflict in Kashmir. Zubair had been caught in the crossfire during shooting between Indian and Pakistani troops along the Line of Control (LoC) which separates Indian and Pakistani administered Kashmir.

Aniela’s family lives in a village just in front of Indian guns and bunkers. She and her five siblings have lost their main breadwinner and face an uncertain future.

This devastated family is not alone. They are just one of many who have fallen victim to this long-standing conflict. Their numbers increase whenever shelling and cross-border shootings erupt between Indian and Pakistani troops.

The Himalayan state of Jammu and Kashmir region was split between India and Pakistan in 1948. Both countries claim the whole of the region, and have fought two wars to try to take control. An insurgency in Indian-administered Kashmir since 1989 has also triggered India-Pakistan hostility.

However, tension flared along the de-facto border on August 6 when five Indian soldiers were ambushed and killed. India blames the attack on the Pakistan army, while Pakistan denies any involvement.

In the wake of the terrible incident, India and Pakistan accused each other of provoking violence along the LoC. Both armies have been exchanging mortar shelling.

Pakistan has proposed to India a neutral investigation into violations of ceasefire. Pakistan claims that eleven people, including 8 soldiers, were also killed and dozens wounded in Indian firing on the LoC since January this year.

On the other hand, India blames Pakistan for 39 ceasefire violations reported across the Line of Control in August which killed six and injured more soldiers. India has also rejected Pakistan’s offer of neutral inquiry of the recent killings.

Delhi insists that Pakistan should hand over the alleged mastermind of the 2008 Mumbai attack, Hafiz Muhammad Saeed,  and ‘to stop its soil for cross -border infiltration to hatch terrorist attacks in India’.

Conversely, Pakistan has maintained that it seeks to resolve all disputes with the neighbouring country through peace talks.

The recent cross-border shelling in Kashmir has also cast doubt on the possible recommencement of bilateral peace negotiations between the nuclear-armed rivals. And a possible meeting of Pakistani Prime Minister Nawaz Sharif with his Indian counterpart Dr Manmohan Singh in New York this month is also expected to not go ahead due to current uncertainty between two countries.

Local peace groups arranged a Peace March to mobilise the communities to voice their worries about dangers of war.
Under the shadow of uncertainty, fear and increased violence on the border, civilian populations living on both sides of the divide are concerned about the impact the resumption of conflict will have on livelihoods and civilian lives. They are worried about the escalation of tension between the occupant armies.
Peace protesters in Kashmir demand an end to violence

To raise their concerns about the fragility of peace in the volatile region and against on-going skirmishes on the LoC, a group of peace activists in Pakistani administrated Kashmir marched in the southern city of Kotli.

Local peace groups Press for Peace and Future Kashmir Forum arranged a Peace March to mobilise the communities to voice their worries about dangers of war.

The marchers displayed placards and banners inscribed with slogans such as “No to civilian killing on LoC”, “Education and progress are our prior needs, not war”.

The protesters appealed to India and Pakistan for an immediate end to hostilities, for the safety and dignity of people and continuation of peacekeeping and peacebuilding efforts.

“The people who reside on both sides of LoC are directly hit by sporadic incidents of shelling and firing,” says Mansoor Rathore, an official of peace organisation.

Communities living in the conflict areas fear that an escalation may lead to massive suffering for the people of not just the border areas, but eventually the whole of Kashmir, on both sides of the LoC.

There is a growing concern among the civil society groups in both countries that unless  lingering disputes are resolved with peaceful dialogue, the lives of innocent people cannot be saved from the disastrous ramifications of violent disputes.

Zafar Iqbal is a campaigner and independent writer. He is founder of Press For Peace, a Kashmir based organisation working for promotion of peace and sustainable development.
Read more from Zafar Iqbal