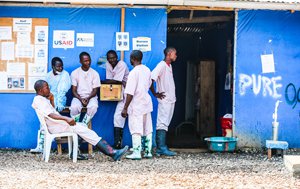 After over a year of turmoil resulting from the Ebola outbreak, Liberia now seems to be gradually returning to normal. The nation has been declared Ebola free. Liberians and the world were slow to realize the serious nature of an outbreak which eventually killed over 4,000 people. Following a period of delay and blame throwing, Liberians resolved to collectively fight the outbreak. Civil Society organizations, including several local peacebuilding organizations, took the lead in engaging communities

The first case of Ebola in Liberia was identified in March 2014. Initially the outbreak was contained to Lofa County. But in July came a second outbreak that went on to engulf the capital, Monrovia. By late September the death rate was increasing daily. Rampant violence resulted from the failure of Health Team to respond timely to calls to collect the sick or dead. The lack of Ebola Treatment Centers (ETUs) coupled with the closure of major hospitals around the country exhibited fear and tensions in the country.

For up to three months there was only one ETU and two ambulances responding to the overwhelming case load. But this later changed with the high level of international support which saw the establishment of 17 ETUs, the distribution of several cars and provision of tons of medical supplies. This increase in capacity was coupled with the high resilience and efforts of civil society organizations, such as the Liberia Early-Warning and Response Network (LERN)and the National Civil Society Council.

The LERN is a network of civil society, UN organizations and government institutions working collaboratively for the early detection of triggers that could lead to widespread violence. The initiative is supported by Humanity United and Trust Africa, and coordinated by the Liberia Peacebuilding Office. The network played a leading role focusing its work on preventing Ebola and its related violence in four counties of Liberia - Montserrado, Grand Bassa, Margibi, and Rivercess. The role of local peacebuilding organisations was clearly visible as they joined other civil society organisations in the fight against the virus.

To successfully implement activities outlined as Ebola related priorities, LERN constituted a Special Task Force on Ebola. The task force was comprised of five organizations, each providing administrative, filed and coordinated support to the development, resource mobilization and implementation of the Ebola response campaign.

LERN’s Ebola-related work focused on three key outputs namely: Four counties, Rural Montserrado, Margibi, Grand Bassa and Rivercess were targeted because of the lower rate of deaths in these area and the group plan to help prevent the spread thereby keeping those areas safe. The desire goals were achieved as the virus spread to those areas was contained effectively.

Even though Ebola still remains a threat in Liberia, especially as neighboring countries are still reporting death rates, it is important to note the significant progress which resulted from the very hard work and resilience of locals.

Additionally, while it remains clear that the current trend is the result of a combination of efforts of all actors, LERN’s activities contributed immensely.  It helped to further reduce the violence which characterized the fight against the virus. The network developed and left in 40 communities’ a variety of Information Education Communication materials including training presentations, flyers, and pre-recorded radio dramas in English and local languages. Together with other peace groups, like the Pen Pen Peace network, the LERN one-on-one awareness approach targeted locals which made a big difference.

Despite the significant gains made, there were challenges mentioned which must be noted for future programming in similar situations. For example reaching out to illiterate rural populations with the appropriate message and having to deal with the issue of stigmatization.

A good number of the communities visited had no form of support to help victims deal with the psychosocial effects of the stigmatization. Mobilizers, not trained to handle psychosocial issues, had to deal with this sad situation often referring to relevant institutions.

For some areas, the very difficult road conditions led to delays in completing tasks where mobilizers had to spend hours on the road with vehicles periodically breaking down.

Moreover, the major challenge was stigmatization which was dealt with by re-enforcing awareness messages relating to the spread of the virus. For example, EWER Working Group team members provided clarity that Ebola is transmitted only when a person shows major physical signs and the survivors could not pass the virus on to other because they have built resistance; only sexual intercourse could transmit the virus from male survivors within 90 days after successfully completing treatment. These interventions helped greatly.

As Liberia is still threaten by this disease, there is still a need to be cautious and assertive. Government and the international community must continue to support awareness activities and the general population should still be practicing good hygiene habits which is useful even in the absence of Ebola.  Going forward, future programming under such circumstance should see the mainstreaming of elements of psychosocial support in the implementation of activities. From the onset of intervention, greater emphasis should be placed on the timely allocation of resources for empowering civil society to engage in awareness in communities, especially those in hard-to-reach locations.