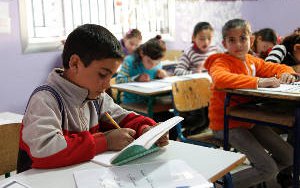 A Syria refugee in a Lebanese school. Image credit: DfID
Education provided during a crisis can be a pivotal factor in helping children to cope.
Like many, the image of a young lifeless Syrian boy has been etched into my memory. The way he was lying in the sand, I thought he resembled a sleeping child. In the alternate universe where my mind sometimes operates, I found myself imagining him on his father’s chest, rather than the cold sand of that Turkish beach.

His image took me back to the children I had met while visiting towns on the Turkish-Syrian border just a few weeks before. I thought of a boy no more than 12 years old who had lost a quarter of his skull to air strikes in Aleppo. Despite the obvious violence he had endured, he smiled genuinely and was excited to practice his English, given the amount of time he had been out of school. Would his family attempt the same perilous journey that had drowned that poor child? Would he still smile, years from now, if his life remained paralysed by conflict?

I have been pressing myself to consider how we can do better. As a global community, how can we work to improve the welfare of children worldwide? Most of the recent discourse on this topic has centered on immigration reform and policies that can accommodate refugees in an immediate sense. I fully support these discussions but I also advocate for more strategic planning and policies that give attention to both short and long-term goals.

Paramount to the welfare of children is providing safe haven from harm. Yet the needs of children who have experienced violent conflict and displacement do not end there. Many require services to help them mitigate the effects of violence, offer them safe spaces to heal, and give them skills and hope for the future.

To truly help children, both safe havens and long-term care is required.
To accomplish this, organisations like the United Nations and international NGOs offer “education in emergencies”, which provide children with vital care during and in the aftermath of conflict. Education provided during a crisis can be a pivotal factor in helping children to cope with recent events, while giving them essential skills for the future.

During a crisis, a school can provide stability for a child. Medical services can often be accessed, school meals become a guaranteed food source and teachers and trained personnel gain the opportunity to address psychological damage.

Beyond its importance as a form of humanitarian aid, education also provides a road to long-term development and recovery. Through education, children can choose productive life paths rather than feeling pressure to join armed groups. They gain skills and credentials necessary to move forward. In these instances, education is key to breaking cycles of conflict and offering hope for the future.

But providing this care for children is only a marginal consideration of the international community. Presently, less than 2% of all humanitarian aid funding is designated to education in emergencies. Given the fact that refugees remain in 'temporary' settlements for an average of 17 years, this means an entire generation of children could be lost.

In Syria, many have already been out of school for over four years. These children are being deprived of a future and left to remedy the impact of conflict on their own. Increasingly, desperate parents are attempting life-threatening journeys to find safety and promise for their kids.

To truly help children affected by conflict, both safe havens and long-term care is required. Nations of the world need to simultaneously review immigration policies while also committing immediate support to a global fund for education in emergencies. This moment needs to be meaningful. We need to do better.

Children and youth Refugees and IDPs
Disclaimer: The views expressed in this article are those of the author and do not represent the views or position of Peace Direct.

More on Children and youth and Refugees and IDPs → 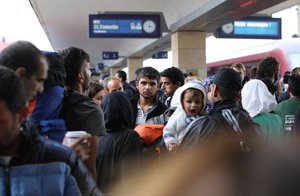 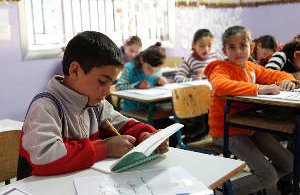 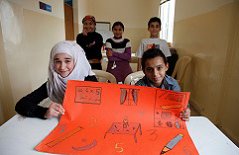