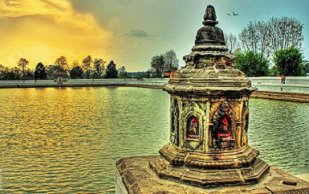 The entrance to the Nepali city of Bhaktapur. Image credit: Dhilung Kirat
After the second people’s movement of 2006, Mothers' Groups formed across the country
While MPs were fighting in the Nepalese Constituent Assembly recently, local peacebuilding groups in Nepal were working for peaceful change. Nepalese Mothers’ Groups (Aama Samuha) have been working towards that goal in Nepal for almost two centuries now.

Although being called Mothers’ Group seems to suggest that they focus only on women’s issues, that is not the case at all. They do work to improve women's lives - but as part of their overall goal of improving social welfare, peace and prosperity for all. Indeed, the original Mothers’ Group is one of the oldest civil society groups in Nepal’s history.

It has been gradually extending its areas of engagement. These now include building peace and harmony across communities, since the organisation was formed by women whose husbands and sons joined the British Army after the peace treaty between Nepal and the British East India Company in the 1800s. They came together to sing, dance and perform cultural activities. Later they formed a group, and began to meet every week.

The group also started welcoming returning soldiers on leave with singing and dancing. In return, the soldiers donated money to the groups and the money was used for social welfare activities. The groups later turned into the Mothers' Group and enlarged their activities. Others communities were impressed by their work, and soon similar groups began to appear.

In the present day, many NGOs and INGOs have helped these groups develop their work since the establishment of democracy in Nepal, in 1990. After the second people’s movement of 2006, Mothers' Groups formed across the country, engaging in various different activities including:

Besides these, the groups have very discreetly also helped reunite and rehabilitate displaced victims of the conflict in Nepal with their families. The groups work carefully in order to avoid being targeted.

A second wave of women's groups: working for peace since 2006

Since the success of the second people’s movement and the Communist Party of Nepal-Maoist (CPN-M) coming into mainstream politics in 2006, many social organisations, including NGOs, INGOs and the Mothers' Groups, have concentrated on working for peace. Mothers' Groups have welcomed returned ex-combatants and the child soldiers, working to reunite them with their families and help them re-enter society.

The groups have encouraged and facilitated to the reintegration of child soldiers into schools, as well as working on reconciliation projects between victims and perpetrators of violence in the conflict, by organising social rituals and collective activities. In addition, the groups have facilitated community conflict resolution, helping to solve disputes peacefully through dialogue and mediation.

Mothers' Groups go back almost 200 hundred years, but are almost absent from mainstream media and discussion
Bimala B.K, a female activist from the Bardiya district of the mid-western region of Nepal, told me recently that "the activities of the Mothers' Groups are becoming very popular, with lots of people from the community taking advantage of them.”

“Village committees in Bardiya have appointed women’s community health workers after nomination from the Mothers' Groups. In addition to these, the Mothers' Groups are also celebrating Women’s Day, organising different programmes to make people aware of importance of the day."

Likewise, Namuna Mothers' Group in Gorkha district has worked on health, nutrition, livelihoods and microfinance issues. Members of the group have been making people aware of health and nutrition. Through support of micro-finance activities, its members have been generating income by launching goat and chicken farms, and other small businesses.

The Mothers' Groups have been active across the country in many different ways. And geography does not make a difference. The Mothers' Group in Kimanthaka, in the northern hills of the Sankhuwasabha district – seven days’ walk from the district headquarters – is very active, and recently demanded the establishment of a birthing centre when the Chief District Officer (CDO) visited. Members of the group also expressed to the CDO their dissatisfaction with the lack of attention from government officials.

Mothers' Groups have a long history. They go back almost 200 hundred years, but are almost absent from mainstream media and discussion. And because they are volunteer and informal organisations, they are generally not registered with government institutions or on the radar of funding agencies. Their long-term sustainability is therefore a concern.

The Nepalese Ministry of Peace and Reconstruction has developed a National Action Plan (NAP) to implement UNSCR 1325 and 1820 on women, peace and security, and some NGOs and INGOs have been working to improve the capacity of the Mothers' Groups. But the NAP operates in the capital, and has been highjacked by well-funded and well-established women’s organisations in the centre. Not only the Mothers' Groups but many other women’s organisations are unaware of UNSCR 1325 and 1820, and are therefore unable to benefit from the NAP.

We work voluntarily, and with small donations
Lalsari Sunar, chairperson of the Taratal Mothers' Group in Bardiya, said that “We suffer from a lack of skills and funding. But we have been doing many effective activities, including solving community conflicts, supporting female victims of domestic violence, and conducting door to door education and school registration campaigns.” On outside assistance for funding, she said that “We basically work voluntarily, and with small donations.”

There is no doubt about the positive engagement of Mothers' Groups in social mobilisation, and their role in establishing peace, harmony and the empowerment of women. The question is how to promote and sustain their work, permanently. Doing so would go a long way towards supporting the incredible but often overlooked work of these crucial organisations in Nepal.

[more_info_box] This article is published as part of our support for International Women's Day, the global campaign celebrating the lives and contribution of women to society, and supporting the struggle for equal rights around the world.