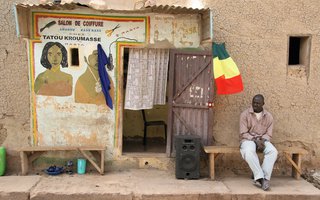 While Mali has experienced an increasingly deteriorating security situation since 2012, the number of cases of COVID-19 has increased dramatically as a second wave has shaken the country since November. Public support varies on the measures taken by the government to curb the spread of the pandemic, often across socio-economic lines. There has been a gradual rise in the number of cases with a peak never reached during the first wave.

Faced with the scale of the health crisis, the Council of Ministers, meeting in an extraordinary session on Friday 18th December, adopted new emergency measures and complementary support measures. Amongst others, these are:

Since government support for civil society efforts has often been lacking in Mali, this last provision is an important one. Nevertheless, it is the communities that bear the brunt of the impact of the pandemic: no more school until 4th January, no more public hearings until the 16th, and the closure of shops, bars, restaurants and clubs until further notice.

A tightening grip on security

In parallel with the health crisis, the security situation has been increasingly deteriorating in the northern and central regions of the country. These regions have become very difficult to access due to the presence of unidentified armed groups who commit attacks on the roads, carry out kidnappings and increase the number of improvised explosive devices.

In parallel with the health crisis, the security situation has been increasingly deteriorating in the northern and central regions of the country

Alongside measures to combat the pandemic, the transitional authorities have invoked "the country's security situation" and "the persistence of terrorist actions" to put in place a whole series of measures of a different kind that will "significantly alter the exercise of public and individual freedoms", in the words of the Minister of Territorial Administration. The government has been seen to be tightening its grip on security through these measures.

In a letter addressed to all governors, prefects and sub-prefects of Mali, the Minister of Territorial Administration and Decentralization, Lieutenant-Colonel Abdoulaye Maïga has given the green light to now "order searches in all places by day and night". The minister also reminded them that they now have the power to "ensure the control of the press", "social networks", "radio or television broadcasts, as well as cinemas and theatres".

While medical personnel denounced "a relaxation" in the application of measures to protect against the virus, this selection of arrangements gives the National Human Rights Commission of Mali cause for concern, according to its President Mr. Aguibou Bouaré. Freedom of expression and individual liberties have been threatened in the name of the pandemic. As President Bouaré declared in an interview with Radio France Internationale RFI, we must be doubly vigilant in the face of these measures deemed "freedom-destroying".

Given the national context, exacerbated by the health, security and social crisis, the work of local peace actors has not been made any easier.

According to the Protection Cluster report, "out of a total of 3,714 violations recorded between January and November 2020, property rights violations and violations of physical/psychological integrity are the two highest categories every month without exception. The number of forced population movements is directly linked to the number of violations of the right to life". In addition, a Rapid Assessment Report by the Protection Cluster reports several cases of attempted rape accompanied by physical violence or assault against girls and women of all ages.

Due to a lack of access to certain parts of the centre and north regions of Mali, local peacebuilding actors find themselves cut off from some areas for awareness-raising activities. In some areas, the main water points are not far from the spots frequented by armed groups, putting the women who fetch wood and water at risk of abduction or violence.

Due to a lack of access to certain parts of the centre and north regions of Mali, local peacebuilding actors find themselves cut off from some areas for awareness-raising activities

Despite this situation, a significant number of people were found to believe that the challenge could turn into an opportunity to open the way for peacebuilding. A survey by Mali Mètre indicated that the majority of the population believes that the government transition can have an impact on reconciliation between segments of society: between the army and armed groups (52.7%), political parties and citizens (55.8%), between communities themselves (76.9%), between religious leaders (66.8%) and between the justice system and the population (71.5%).

Alongside the hopes seen across the population, the establishment of the transitional Government and the appointment of Colonel-Major Ismael Wagué as Minister of National Reconciliation could raise hopes for a breakthrough in the peace and reconciliation process in Mali.

On Thursday 5th November, an inter-community reconciliation forum was held in Niono, a town in the Segou region in the centre of the country. Four ministers were present, and several hundred local people were invited to participate. The discussions were aimed at easing tensions between the different communities in the cercle (an administrative area in Mali), including the traditional Dozo hunters on one side and the Peule ethnic group on the other.

On Thursday 5th November, an inter-community reconciliation forum was held in Niono, a town in the Segou region in the centre of the country

The main commitments satisfied most of the participants, and if implemented, would pave the way for peace in the Niono cercle: After the forum, one participant stated with satisfaction: "We felt a change. The ministers want to move away from the logic of the militias.” Seeing these projects materialise will mean a step forward in breaking the cycle of violence that has gripped the country for years. This is just one example of how communities are leading these efforts.

The agreement reached at the forum was signed by representatives of the Dozo and Peule groups, and senior national figures were heavily involved. This large-scale effort takes a traditional conflict management mechanism and makes it more inclusive; allowing the participation of all parts of society.

The crossroads at which Mali is currently situated is a crucial place to grasp the small opening for dialogue seen between opposing communities, and to demonstrate that community-led conflict resolution efforts are the most effective. This transition back to a constitutional and democratic order in Mali could also be an opportunity for a transition to peace. As COVID-19 continues to threaten the social fabric, supporting local peacebuilding efforts must become a priority. Only time will tell how successful and long-lasting this transition will be.

Boubacar Thera is Peace Direct’s Local Peacebuilding Expert in Mali. Boubacar is Programme Officer at the Geneva Centre for Security Sector Governance (DCAF). He is the former national coordinator for the West African Network for Peace in Mali (WANEP). In addition, he is a doctoral researcher in public law at Cheikh Anta Diop University (Dakar, Senegal) and the University of Legal and Political Sciences of Bamako (Mali). Prior to this he worked for a variety of NGOs and other organisations, and as an interpreter.
Read more from Boubacar Thera

Health and counselling Transitional justice and reconciliation Governance
Disclaimer: The views expressed in this article are those of the author and do not represent the views or position of Peace Direct.

More on Health and counselling · Transitional justice and reconciliation · Governance →