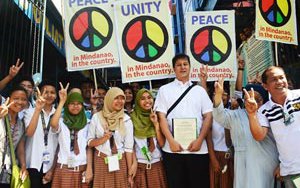 Cong. Christopher Belmonte of Quezon City District VI (4th from right) poses with students from Culiat High School during a caravan calling for peace in Mindanao. Posted by Bureau of Public Information - ARMM on Monday, 16 March 2015

In Muslim Mindanao – and all over the Philippines – people rejoiced at the prospect of peace with the drafting of the Bangsamoro Basic Law last year. The law is intended to provide for the establishment of a distinct political entity to satisfy the demands of those who wish for an autonomous Muslim region in the southern Mindanao area of the Philippines.

However, fears were raised after what has become known as the Mamasapano clash in January.

A secret operation called Oplan Exodus was launched by the Special Action Force (SAF) of the Filipino police to capture Zulkifli Abdhir. Also known as Marwan, he was on the FBI’s most wanted list.

An SAF officer involved in the Mamasapano operation has anonymously posted an online petition calling for the every effort to be made in pursuing the peace process in Mindanao.

The “true face of war is not that dead soldier or rebel on the battlefield. It is a mother fleeing home with a cartload of offspring, amid sounds of gunfire,” he said. At the time of writing, the petition has over 6,500 signatures.

And in March, the Mindanao region itself organised a peace caravan in the capital, Manila. More than a million people have signed another petition supporting the peace process in Mindanao.

In a show of support, a huge variety of people joined: students and faculty from different universities, politicians, employees of the National Commission on Muslim Filipinos, and members of the public.

In Cotabato City, peace organisations held another caravan and peace rally only last week, to celebrate a year after the signing of the Comprehensive Agreement on the Bangsamoro.

Leading the Mindanao-based Friends of Peace, Cardinal Orlando Quevedo has invited representatives of peace organisations to meet on April 6, 2015. They will discuss the problems with the peace process, including issues related to the Bangsamoro Basic Law, and different ways forward.

At the same time, President Begnino Aquino has named several Manila-based activists, including the Archbishop of Manila, Antonio Cardinal Tagle, to lead a National Peace Summit to discuss the Bangsamoro Basic Law.

With all the clamour for peace, the Filipino people will hope that their calls for a just and peaceful settlement of the conflict in Mindanao fall not on deaf ears, but on the reasonable minds of the legislators.

[more_info_box]Background: Peace Direct will soon be launching a new section on the Philippines. Please check back for updates and profiles of local peacebuilding efforts in the country.