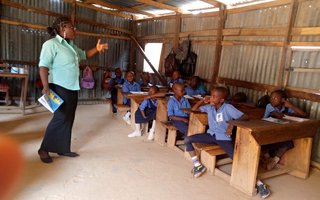 Mercy was born in Longval, a small district in Plateau State, North Central Nigeria. She told me that her beautiful childhood was rudely interrupted by religious crises in Yelwa, Shendam and Jos in 2001:

"Hauwa, my Muslim friend always did my hair. Most of my friends who are Muslims, lived with us irrespective of our tribe, ethnicity and faith. Today, Muslim friends have remained in the community where they all lived together as children and played games, Christians are no longer safe there. Interestingly, on the other side of the long road is the Abbatoir community, a place that is inhabited by only Christians and is not safe for Muslims."

Today, Muslim friends have remained in the community where they all lived together as children and played games, Christians are no longer safe there

Being Christian or Muslim alone isn’t good enough. You have to belong to the “right” denomination or sect. Communities are divided along ethnic and religious lines, but also between the indigenous population and settlers.

A region in crisis

Between 2002 and 2004, the Yelwa Shendam Crisis resulted in the death of almost 300 people. Mercy had travelled to Shendam with her dad to see her mom when they got caught up in the conflict in Yelwa. A predominantly Muslim community, Yelwa is a trade crossroads, and so is populated with different ethnic groups. By contrast, Shendam is a predominantly Christian town. Local government officials, traditional leaders, and residents of surrounding villages are also predominantly Christian. 14-year-old Mercy witnessed all the killings. It was the second time she was witnessing them, seeing Muslims and Christians go at each other.

Mercy, now 34, resides in the Tudun Wada suburb of Jos. It is heavily populated by Christians, but a small enclave called Angwa Hausawa is inhabited by Muslims. She is at the forefront of building interfaith co-existence in the area.

Mercy teaches at the COCIN Faith Private School. Mercy teaches her students that Plateau was once one of the most peaceful states in Nigeria. They listen attentively, trying to grasp the contrast between Mercy’s words and their current reality.

One of her students asked her in a recent class, "Aunty Mercy, tell us about what Jos was like before we started hating each other".

I watched as Mercy told her students, “it was September 2001. I was an innocent little girl, I did not know that the entire community had become engulfed in a bloody conflict …I saw a truckload of human bodies. I was naïve. It was unbelievable. I started hearing that Muslims were killing Christians, and vice versa. I tried to understand but could not because I was only 14, a little older than most of you".

Before the crisis, Plateau State was fondly referred to as the centre of peace and tourism, with all faiths finding space for expression and sharing of ideas.

Mercy told her class, "the truth is that now I am old enough, I can understand, there was already a long-held bitterness and grievances, because some people saw themselves as the majority and yet believed they were being treated unfairly. There were also claims and counter-claims of who 'owned' the land, and several different narratives about natives and non-natives around the contentious issue of ‘indigene certificates’, granted certain political and economic rights for those who had it."

I watched as the students keenly followed her explanations, at times switching to local language to explain to others.

After class, Mercy told me that she sees significant changes because the students are asking the right questions, and that it is important for repairing conflict ridden societies.

After class, Mercy told me that she sees significant changes because the students are asking the right questions

Today, Mercy is an Ambassador for peace, trained by the Relief and Hope Foundation, a local non-governmental organisation that received funds to support this initiative through Peace Direct's Local Action Fund.

She helps children to learn about their faith and promote tolerance and respect for people of other faiths. They are currently developing a local curriculum.

I asked her what she misses about the old Jos, and she explained to me that she wishes to see a community of people from different ethnicities and religions like the one she remembers. She spoke fondly of her Edo neighbour whom she thought was of Igbo origin. She misses the fanfare that followed from each celebration of many Christian and Muslims feasts happening together.

The city of Jos is divided, and Plateau State with its 40 ethnic groups and 51 languages is trying to regain its tag of “peace and tourism”, despite the segregation caused by recent conflicts.

Mercy and many of the participants of Peace Direct’s Local Action Fund project are increasing the opportunities to develop a modern, progressive society through harmonious coexistence that can help bridge the divide. There is a chance and opportunity that Mercy and her students, with all they are being taught, can treat each other as equals.

Dr. Prince Charles Dickson is Peace Insight's Local Peacebuilding in Nigeria. Based out of Jos, Plateau State, Dr. Prince Charles is a peace practitioner and policy analyst with decades of experience in media, public policy, psychology and development practice. He is currently the Team Lead for the Nigerian-based Tattaaunawa Roundtable Initiative (TRICentre).Prince Charles is a certified negotiator and arbitrator, with training in journalism and psychology. He is also a Henry Luce Fellow and Ford Foundation grantee, and holds certifications in Religion and Global Politics, Gender, Negotiation and Conflict Management and Analysis, Interfaith, Peacebuilding and Conflict Resolution.Prince Charles is an alumnus of the University of Jos and, the prestigious Humanitarian Academy at Harvard and the University of Texas at Austin. He holds a doctoral in Psychology (Policy & Human Development) from the Jesuit run Georgetown University Washington DC.
Read more from Dr. Prince Charles Dickson