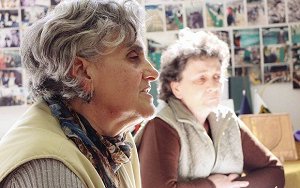 I could never foresee something this horrible happening in Srebrenica. I was living peacefully alongside my neighbors until someone was granted the right to take everything from me.”

Commemorating death - gone but not forgotten

In July 2015, Bosnia-Herzegovina will commemorate the 20th anniversary of the Srebrenica genocide. The Balkan Diskurs team had the unique chance to talk to Zumra Sehomerović, member of the Mothers of Srebrenica association. She agreed to share with us her sad but inspiring life story: of her 20-year battle for truth, justice, and the ending of impunity for the perpetrators of genocide.

“The toughest times are behind me, but it still hurts and it always will. I don’t have the words to express my pain,” says Zumra, who lost her husband, brothers and many close family members in the 1995 genocide. Originally from Srebrenica, the tragic city located in the eastern part of Bosnia-Herzegovina, she now lives and works in Sarajevo.

“Life was good before the war. We had dreams,” Zumra recalls.

"We have been sold out by the UN"
In 1993, the UN Security Council established a safe zone in Srebrenica with Resolution 819 (1993). However, in July 1995, General Ratko Mladić and his army overran and captured the town without intervention from the peacekeepers, resulting in the deaths of more than 8,000 Muslim men and boys.

“We have been sold out by the UN,” Zumra declares in a cold anger.

After regaining her composure, she explained to Balkan Diskurs how the Mothers of Srebrenica filed for civil action before the District Court of The Hague in 2007 to demand compensation from the UN and the Kingdom of the Netherlands, alleging both to be responsible for the failure to prevent the genocide in Srebrenica. After years of legal battles, the Supreme Court maintained the previous decisions, confirming that the UN enjoys immunity from prosecution; a decision upheld in June 2013 by the European Court of Human Rights.

Even though the Netherlands was ruled accountable for the deaths of over 300 Bosniak men and boys in July 2014, Zumra still hopes that the case will be reopened and that the UN will also be held responsible.

“Unfortunately, I will no longer be here to see this happen,” she says.

The fight for a genocide memorial in Srebrenica

Despite many difficulties, the Mothers of Srebrenica won its fight to establish a memorial for Srebrenica in Potočari. Founded in May 2001 as a nonprofit organisation, the Srebrenica-Potočari Memorial Center and Cemetery is dedicated to the 8,372 civilians murdered in the genocide between 11 to 16 July 1995. This number represents the victims officially recognized by the Special Commission for Srebrenica established by the government of Republika Srpska in June 2014. The Mothers of Srebrenica association, however, estimates that more than 10,000 civilians were murdered.

A handmade T-shirt with the dates of birth and death of one of the victims of Srebrenica. Image credit: Clara Casagrande.

The cemetery was not yet officially dedicated to the victims of Srebrenica when the first 600 burials took place on March 31, 2003. On September 20, 2003, former United States President Bill Clinton formally opened the memorial to the public. Since then, thousands of people have gathered on July 11 each year to bury what remains of their newly recovered loved ones. Although the majority of the victims were male Bosnian Muslims and Croats, burials include all religions and both sexes.

Finding the missing: an unfinished process

Many of the victims will never be found
“Twenty years on, families are still waiting for their missing loved ones to be identified. Unfortunately, finding and identifying all victims will probably not be possible,” Muhamed Duraković explains, head of mission of the International Commission on Missing Persons (ICMP) in Libya, and Srebrenica survivor.

The process of identification remains extremely complicated. Many bodies were dismembered when Karadzić’s troops tried to hide their crimes by reopening mass graves to rebury bodies in secondary and tertiary graves.

He explained to Balkan Diskurs how, by using heavy machinery and transporting a mixture of dirt and body parts via trucks, the troops destroyed the integrity of the victims’ bodies.

“Moreover, many will never be found and some victims won’t be identified, as there are no more family members to provide DNA samples.”

The difficult journey of returning to Srebrenica

The Mothers of Srebrenica association also encourages and helps survivors to return to Srebrenica. But this is a very difficult task. “There is no coexistence, tolerance, or harmony between the different ethnic groups. There is high level of denial. Many Serbs in Republika Srpska are proud of what Karadzić and Mladić’s army did in Srebrenica, and they are often celebrated as heroes,” says Zumra.

According to the Mothers of Srebrenica, much remains to be done in order to achieve the goal finding and identifying victims, bringing justice to survivors,and reclaiming a city that was once their home. Their mission is of crucial importance for the country’s future, as recognition of the Srebrenica genocide by all actors involved would be a monumental step towards reconciliation.

This is an edited version of an article by Chloé Gaillard and Marion Pineau that originally appeared on Balkan Diskurs. A non-profit, multimedia platform dedicated to challenging stereotypes and providing viewpoints on society, culture, and politics in the Western Balkans.