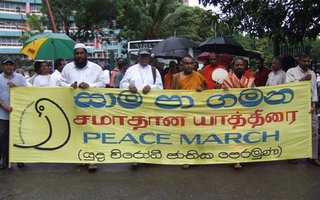 Peace march in Colombo, 2006. Image credit: Humanity Ashore.
I would like to see the next generation growing up in a peaceful country, where suicide bombs, violence and death counts are not part of a daily routine.
Thirty years on, the memory of what happened on 28 July 1983 is still fresh and this date remains a crucial landmark in the dramatic Sri Lankan history. Following the killing of 13 soldiers by the LTTE (Liberation Tigers of Tamil Eelam), Sinhalese mobs took revenge and killed thousands of Tamils around the country. The pogrom became known as Black July and it triggered a civil war that lasted 26 years.

What sets it apart from the countless incidents of violence throughout the conflict period is the participation of civilians. It was not the official government forces that were the perpetrators of violence there. It was mobs of young Sinhalese that pillaged houses and shops, armed with the voting lists to accurately differentiate themselves from the “others”. As the police stood by and the government was supporting them, they chopped, killed and burned Tamil citizens.

I am part of that generation born and raised during the civil war, and I am part of a country that both before and after the conflict has been characterised by heavy militarisation. I would like to see the next generation growing up in a peaceful country, where suicide bombs, violence and death counts are not part of a daily routine.

The war is over and it is now time to move forward. Also the government acknowledges that Sri Lanka needs to prioritise reconciliation and reconstruction to facilitate conflict transformation. But in a country where remnants of war have become treasured souvenirs and killing machines have become playthings at urban parks, is it indeed possible for authentic reconciliation and conflict transformation to take root?

The ongoing anti-Muslim agitations in the country cast further doubts and raise renewed fears. Following the annual Black July commemoration, on August 11 a Buddhist mob attacked a Muslim mosque near Grandpass, Colombo. This is only the most recent attack of a systematic hate campaign against the Sri Lankan Muslims.

Social media are spreading hate speech with a number of anti-Muslim pages. Earlier this year a group of Sinhala Buddhists started boycotting halal food and popular Muslim apparel shops, through a well-organised series of public protests that drew large support. The All Ceylon Jamiyathul Ulama (ACJU) was forced to ‘voluntarily’ terminate the halal certification process for all its local products. The list of the Tamil places targeted is long: there were attacks in a Muslim-owned fashion store in Colombo suburbs, in a beef stall in Tangalle, and in a mosque near Grandpass at the beginning of Eid Festival. When the mosque was being attacked by a mob of Buddhist monks, the police stood by without intervening.

What is unforgivable in this series of incidents is the state patronage enjoyed by the Sinhala Buddhist extremist groups like Bodu Bala Sena, Ravana Power and Sinhala Ravaya. The actions of these groups are condoned by the government and, at times, encouraged. The negotiations between Bodu Bala Sena and ACJU on the Halal boycott were handled by the Defence and Urban Development Secretary Gotabaya Rajapaksha. He is openly associated with Bodu Bala Sena:  the role of the state is hardly neutral.

The attacks and the threats of these Sinhala Buddhist factions are akin to terrorism. The only difference is that these groups enjoy evident state patronage, working as a cat’s paw for the government. The only response from the president was to request the editors of the leading newspapers to refrain from covering the anti-Muslim attacks. In our highly militarised post-war context, only thanks to state protection these groups can carry on their activities without fearing prosecution.

Despite the ongoing violence, we are fast approaching another turning point in our walk towards a peaceful country and an inclusive multiethnic society. A Colombo resident and a Tamil woman who lost everything during the Black July said in an interview with the BBC:

Hopefully, nothing is going to happen again.That's what we feel because I think that was a lesson which all sides have learnt…The war of 30 years has taught both sides equally, I think. They have gone through enough suffering.

I am a member of the Sinhala Buddhist community and I am not sure that we have learned the lesson from Black July or that we remember it. If we continue to ignore the signs of increasing violence and we allow our politicians to protect the extremist groups, we might live again the same situation of the last few days of July 1983. The fanaticism this time will be against the Muslim community. The perpetrators will be the same, with the addition of the Buddhist extremists.
For security reasons, we cannot publish the name of the author of this post.
Read more from Anonymous

How to address human rights abuses in Burundi?