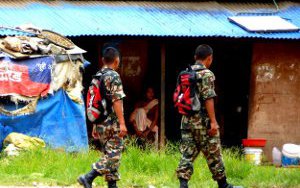 Throughout the trajectory of TJ in Nepal, victims and other community members have had limited scope to articulate what TJ means to them.
The ten-year civil conflict (1996 - 2006) between the Maoist rebels and the Nepali state resulted in an estimated 16,000 deaths. Over seven years since the signing of the Comprehensive Peace Agreement, the Truth and Reconciliation Commission (TRC) bill was adopted last month. Many, including victims, human rights organisations and donors, remain strongly opposed to the bill. While it makes modest amendments to earlier drafts, many still fear perpetrators will be granted amnesties, and assert that it falls short of international standards.

Central to these criticisms is the issue of local participation. Who gets to decide what transitional justice (TJ) looks like in this post-conflict country? By what means? And indeed, when? Throughout the trajectory of TJ in Nepal, victims and other community members have had limited scope to articulate what TJ means to them.

I argue that a greater focus on participation in TJ can provide avenues for the voices of victims and other actors to be heard, albeit not without significant challenges. From my research in Nepal, it is clear that participatory attempts need to go beyond consultations and information sharing to give victims and affected community members a true opportunity to be partners and decision-makers in the TJ process.

Participation in development models offers those who are socially or economically disadvantaged, marginalised or powerless with an opportunity to identify and express their needs, and the best ways to address those needs. At the heart of participation is a concern for the power, voice and rights of people who will be most effected by development. In most participation models consultations and information sharing are considered to be tokenistic.

Despite participation’s appeal and the normalisation of its key components in development programs, it is not without criticism. Its effectiveness has been questioned, as it is evident that providing space for people to exercise their voices does not automatically translate into empowerment of those people, those voices being heard, or those voices having any influence.

In recent years there have been calls for participatory methods from development studies to be included in TJ processes. These calls address a key critique of TJ - that it focuses on state-centric measures and institutions rather than people, particularly victims.

Two main participatory approaches have been adopted in TJ practices: surveys and consultations. These methods are used with the aim to: identify needs and entitlements of affected communities, ensure a strong sense of local ownership, promote respectful dialogue and stakeholder articulation, reignite peace processes, trigger debates in the community, and help victims and members of civil society to develop local ownership of the TJ process.

Participatory approaches in the Transitional Justice process in Nepal

The Comprehensive Peace Agreement signed in 2006 provided for a TRC to be established within six months of signing. However, since that time seemingly little progress has been made in relation to the TRC and other TJ provisions.

I have identified four issues participatory attempts have covered in the TJ process so far:

The Ministry of Peace and Reconstruction held TJ consultations with the support of the UN Office of the High Commission for Human Rights. However, the way these consultations were designed and implemented, focusing on the proposed TRC, could have unduly influenced and limited how participants constructed their needs and what they anticipated the government was in favour of delivering.

A benefit that flowed from these consultations was that a number of suggestions were included in the draft bills. However, the bills also retained controversial provisions. So it is evident that consultations have the potential to form one part of a participatory approach but do not, in and of themselves, ensure meaningful participation..

I have identified a number of challenges in the way participation has taken place in Nepal’s TJ process.

1. The prominent role of TJ experts and national actors

From the outset, TJ was not driven by victims or ‘the community’ but by a limited number of TJ experts and political elites. There was limited discussion about the adoption of a TRC in Nepal prior to the involvement of a South African consultant,. Despite the initial reluctance by the Maoists and the State, both negotiating parties came to see the benefits of the reconciliation and amnesty model adopted in South Africa, and it was subsequently included in the Comprehensive Peace Agreement. So the TRC and the Commission to Investigate Enforced Disappearances structure does not necessarily reflect what victims want.

To date, other actors generally speak for and about victims in Nepal, which has the potential to further perpetuate victims’ marginality and disempowerment. Victims’ groups are one of the few avenues through which victims have been able to articulate their concerns in Nepal. There is an increasing trend for a few victims’ groups to be in direct communication with donors and the media. It will be interesting to see how the supporting NGOs and institutions react to this shift in power relations, as well as the impact this will have on the TJ process in Nepal.

The trajectory of amendments to the draft TJ bills indicate that even with modest participation, it is political will that ultimately determines the extent to which voices of the marginalised are heard, included and heeded in state-centric, top-down TJ processes. This is particularly evident with regard to amnesty, with calls from consultations (and beyond) against amnesties set in opposition to repeated attempts by the government to include blanket amnesty clauses in TJ bills. This highlights the serious, perhaps even at times irreconcilable, tensions between the voices of victims, TJ experts, TJ implementers and other actors.

Yvette Selim is a freelance consultant and a PhD candidate at the University of New South Wales. She can be reached at yvette.selim@gmail.com.
Read more from Yvette Selim 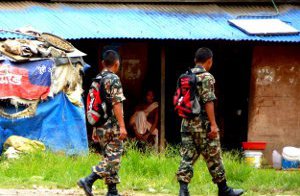