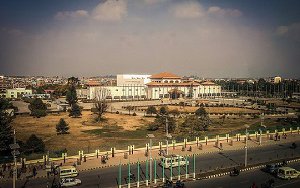 Nepal's new constitution was promulgated from the Constituent Assembly building on 20th September 2015. Image credit: Swapnil Acharya
The Nepalese people have expressed hope for a better future now the country has entered a stable development phase
For the first time in history, Nepal has adopted a constitution which is supposed to be representative of the Nepali people. President of Nepal, Dr. Ram Varan Yadav, promulgated the new constitution on 20 September 2015 from the building of the Constituent Assembly (CA). It seems as if the dream of a representative Nepali constitution passed through the CA may have come true, heralding an era of peace and democracy.

The constitution was passed overwhelmingly by 90 percent of votes, after which the CA was converted into a legislative parliament. The Nepali people welcomed the constitution and celebrated by organizing different events nationwide. All over Nepal, people lit candles and greeted each other. The Nepalese people also expressed hope for a better future now that the country has entered into a stable development phase. Much of the international community has welcomed the new constitution. However Nepal’s neighbour country, India, has not been so welcoming, issuing only a single statement declaring that India notes the declaration of the new constitution.

The constitution is meant to establish Nepal as a federal democratic republic, however demarcation and delineation of federal provinces has become a dominant issue of tension in the wake of the constitution. The concept of a federal structure emerged to try and ensure the rights of disadvantaged communities and bring them into the mainstream of development efforts. Experts are saying that the new constitution has made adequate provisions for the rights of these communities, however there are concerns that the benefits will only reach leaders rather than the Nepalese people as a whole. The principle of federalism has been limited to the demarcation and delineation of the provinces, missing potential steps for further progress regarding issues of inclusiveness and human rights.

Many Terai-Madhes people perceive the new federal boundaries as further marginalization
Political parties based in Terai region of Nepal walked out of the constitution-making process when the 4 major political parties reached an agreement in June to ‘fast track’ the process and to delineate the federal provinces. Terai-Madhes people have largely objected to the constitution, particularly the new federal boundaries, because they believe it to further marginalize their communities. Since walking out of the process, the Terai-Madhes political parties have been organizing protests opposing the agreement, forming an alliance called the United Democratic Madhesi Front (UDMF). The UDMF has been protesting to call for nationwide strike against the decision to delineate the provinces in the constitution.

The UDMF’s major demands includes (i) the implementation of all past agreements reached between the UDMF and the government, (ii) 2 provinces to be part of the entire Terai-Madhes belt, (iii) an electoral constituency based on population only, (iv) an amendment to citizenship laws, and (v) proportional representation in every state institution. It is becoming harder to understand what the exact agenda of the UDMF is as the protests have been escalating. News of a 7-point agenda has emerged from India, and a 35-point agenda is circulating in the media in Kathmandu. Some UDMF leaders deny these demands to be their own, whilst other are affiliating themselves with them. The Government has registered an amendment bill in parliament to address the UDMF’s demands, however the UDMF remain dissatisfied, saying that all demands must be met before they will come to the negotiation table.

Protests have escalated into outbreaks of violence in Nepal. On 24 August, seven police personnel and a child were killed within thirty minutes during protests organized by the Tharu community in the west. After this, an estimated fifty people were killed including protesters and security personnel in the protest in the Terai-Madhes. Some people are saying that internal competition among the parties over which is the most revolutionary is causing non-violent protests to escalate into more violent activity. In the last 2 months, schools, colleges, universities, officers, markets, shops and transportation systems have been closed down in the Terai-Madhes and the day-to-day life of the people has been further jeopardized. The only highway of Nepal that is located in the Terai-Madhes has also been closed down. Millions of children have been prevented from going to school which violates their fundamental right to education.

India and the economic blockade

The economic blockade is threatening the unity established after the earthquake in Nepal
India has imposed an economic blockade on Nepal in the wake of the promulgation. Nepal, a landlocked country, shares borders with India in the east, west and south, and shares a border with China in the north. The Himalayan mountain range in the north of Nepal prevents easy access to China. Therefore, Nepal depends entirely on India for the importation of goods including fuel, cooking gas, medicines, raw materials, food items, and other necessary goods. India has argued that it has imposed an economic blockade on Nepal due to security concerns caused by the protests, stopping all vehicles coming from India crossing the border carrying the above goods. There is a now a shortage of necessary items nationwide, and the Nepalese people are suffering. The people have not yet recovered from the earthquake which struck in April and May.

By imposing the economic blockade, India violates a number of international laws, in particular for a landlocked country. However these treaties and laws have no meaning to a powerful country like India, especially when it comes to Nepal – Asia’s second poorest country. Indeed, Chinese President Xi Jinping delivered a speech in the 70th session of the UN General Assembly on 28 September 2015, proclaiming that ‘the big, strong and rich should not bully the small, weak and poor, the principle of sovereignty not only means that the sovereignty and territorial integrity of all countries are inviolable and their internal affairs are not subjected to interference’.

In fact, it seems that India may be backing the UDMF leaders, helping their efforts to organize protests and sit-ins in Nepal. Protestors have been frequently using Indian territory to organize their campaigns. The UDMF leaders have been travelling through India to attend protests in different places across the border.The unity in Nepal which was strengthened in the aftermath of the earthquake is being threatened by the economic blockade and continuous strikes in the Terai-Madhes region, particularly between the Pahade (people living in the hills) and the Madhesi (people living in the Terai-Madhes). The issue of ethnicity is becoming deeper and tensions are being brought to the surface, spilling over into the channels of social media. There are also emerging fears of communal violence.

It is the responsibility of all communities to ensure that the constitution is properly implemented
In the face of growing tensions, a number of peacebuilding rallies have emerged, led by Nepalese youth, to maintain harmony, coexistence and peace in the Nepalese society, especially between the Pahade and the Madhesi communities in Kathmandu and in the Terai-Madhes. The newly elected Prime Minister has responsibilities not only to implement the new constitution by also to bring all dissatisfied groups, including the UDMF, into the mainstream of politics. There is no other option left to solve the ongoing unrest in Nepal besides dialogue and negotiation. The negotiation teams formed by the government and the UDMF need to sit at the negotiation table and participate in dialogue to find a common solution. The government have to bring other dissatisfied parties such as Libhuwan in the east and Tharu Communities in the west to the table. Now that long-awaited dream of a Nepalese constitution of the people has come true, it is the responsibility of all to ensure that the constitution is properly implemented.