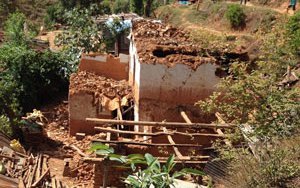 House in Sindhupalchok damaged by the earthquake of April 2015, credit: Ambika Pokhrel

An Indonesian friend of mine asked me a question “do you know what solved the Ache conflict?” some six years ago, he then answered himself “it was the tsunami”. I wish I could say one day “Nepal’s conflict was solved by earthquake”.

Nepal, a tiny Himalayan country that has not yet fully recovered from the ten yearlong internal armed conflict, was devastated by the deadly earthquake that hit on 25 April and 12 May. Around nine thousand people lost their lives, many were injured and hundreds of thousands found themselves homeless and taking shelter under the open sky. Along with the homes, food, other household items and cattle were destroyed as well as a lot of Nepal’s historic and traditional heritage. No food, no electricity, no telephone, no Internet, no water supply - all were gone within minutes.

Life after the earthquake

Popularity of the security forces

Immediately after the earthquake, the only ones working to help the injured and those who were trapped inside the damaged houses were the Nepal army, the Nepal police and the Armed Police. The security personnel did not waste time; they went on location, rescued people and brought them to hospitals. The way they performed their job was impressive. Social media, Facebook and Twitter for instance, started to fill up with examples of the rescue and relief work conducted by the security personnel. People posted pictures and wrote appreciative words for their actions. Different media, including print media and TV channels, also effectively covered their courageous work. However, different leaders of Nepal’s political parties started to panic when they saw how people glorified the security personnel.

Regaining popularity for the political parties

On the other side, almost all of the political leaders and government staff were being criticized for not being effective and active in the rescue and relief work. Also, neither the government nor the political parties issued a formal statement immediately after the earthquake, which could have provided psychological relief for the victims. The earthquake became a mirror of the unpopularity of the Nepalese political parties.

After the second earthquake, some of the parties finally decided to work towards helping the earthquake victims. In particular the Nepali Congress, the Communist Party of Nepal - Unified Marxist and Leninist (CPN-UML) and the Unified Communist Party of Nepal – and Maoists (UCPN-M), whom have formed a separate volunteer group to clear the debris of destroyed houses and schools and are building temporary shelters. They are now engaging in other necessary work such as helping people, building schools, harvesting crops etc. These activities are helping the political parties to regain the popularity they lost during the lingering peace and constitution making process.

Role of the media

Some of the Nepali print media, TV channels and FM radios seemed in a race to publish the most frightening scenes of the earthquake. People were also regularly posting photos on websites and social media. But frequently exposing terrifying scenes of deaths and ruined structures only added more psychological trauma for the Nepali victims.

Furthermore, Amit Dhakal, an editor of Setopaty an online publication, wrote that some of the journalists were in hurry to criticize the government and the political parties for their ineffectiveness to address the earthquake’s impact. As a result people from around the world were reluctant in donating money to the Prime Minister Relief Fund. On the other hand, Nepal Rastra Bank issued a decision to divert all money deposited in banks for relief works into the Prime Minister Relief Fund.

Nonetheless, the Nepali media has done a wonderful job at disseminating quake related news, circulating victims’ expectations and the government messages during rescue and relief time.

The enduring peace process and the non-promulgation of a new constitution in the set deadline after the election of the Constituent Assembly (CA) has put a strain on the relation between major donor agencies, particularly donors based in Kathmandu, and the government. This was highlighted by the donors’ unwillingness to deposit money in the Prime Minister Relief Fund, but instead wanted to provide their own relief work. Further development will be seen on the matter in the government-donors conference scheduled at the end of June.

Unity of the people and rise of volunteerism

People, regardless of caste, ethnicity or geographic location, have been engaging to help the earthquake victims. They collect relief materials and come to the earthquake-hit areas for distribution, but also to show support to the victims of this tragic event. Indeed, unity among the different ethnicities and castes was clearly strengthened in the aftermath of the earthquake.

Formation of the national/consensus government

The issue of the formation of a new government to address the consequences of the earthquake and rebuild Nepal has been floating around in Nepal’s political scene. The political parties, mainly the CPN-UML, are in favour of this idea. About a year and half ago, the parties had an understanding on the formation of a new government, the election of a President, Vice-President, Speaker and Deputy Speaker of the CA, but they all failed to write the new constitution within the timeline they set themselves. They are currently under pressure of continuing and completing the peace process through declaring the new constitution and rebuilding what has been destroyed. Not pursuing these actions and only focusing on changing the government would give the wrong message to the population of non-seriousness in a time of the national crisis.

The massive earthquake and subsequent situation have directly and indirectly created immense pressure for the political parties to break the ongoing custom and to come up with something different. Negotiations among the political parties, particularly NC, CPN-UML, UCPN-M and Madhesi People’s Rights Forum - Democratic (MPRF-D), have been held for the past two weeks and aim at settling the most contentious issues of the constitution. The issues include (i) state restructuring into federal structure (number, name and delineation of the provinces), (ii) forms of governance (iii) election system (iv) judiciary system. The UCPN-M, the third largest party in the CA and leader of the 30-party opposition alliance for the past year, sat in negotiations with the NC and the CPN-UML, the parties in the government. The MPRF-D subsequently followed with the UCPN-M and took part in these negotiations.

On 08 June, the four parties reached an agreement and signed a 16-point pact solving the above-mentioned contentious issues thus clearing the path for the drafting of a new constitution through consensus ways. The major points of accord include:

The parties are in mood to finish writing the new constitution through the fast track, which is made necessary in light of the quake situation.

The opposition alliance is opposed to the deal reached by the major four parties and intends to boycott the CA. Their prime concern has to do with the agreement not mapping the boundary of the provinces and not naming them. But it seems that the opposition alliance is shrinking since some of their the political parties have announced that they will join the CA since the major four parties have decided on writing the new constitution through a consensus basis. Indeed, the deal will definitely promulgate the new constitution by consensus route and will allow parties to form a consensus/national government in order to rebuild the quake-ravaged country.

Other opposing voices involve the issue of federalism, a prime concern of the new constitution, which seems unsolved and postponed. Moreover, defining the number of provinces is not a solution as the core problems are delineation and naming them.  The accord reads that the Federal Commission formed after the deal will decide on delineating the provinces and the provincial parliament will name them.

The earthquake was really a big trigger-factor in the agreement on some of the constitution’s on-going issues. On one hand, it generated immense pressure for the parties to come to a consensus. On the other hand, it created a pretext for those who wanted certain kind of constitution to implement it.