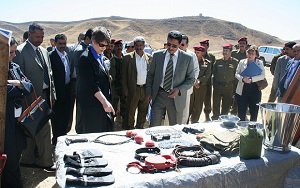 The latest section of Insight on Conflict is now live. Following the outbreak of serious conflict in Yemen, we are pleased to publish the work of our new Local Correspondent (LC). Our Correspondent wishes to remain anonymous for security reasons, but has conducted bespoke research for us on Yemen, investigating the work taking place to build peace in the middle of war.

And that work is vital. Yemen's people are bearing the brunt of terrible violence. With complicated politics even by the standards of the region, the apparent promise of the Arab Spring led many to believe that peaceful political change might be possible. But that hope has gone unfulfilled, and Yemenis now face a long struggle to rebuild and repair.

Our Correspondent has spent more than a decade working with NGOs in Yemen
At the forefront of the effort will be our LC. An activist and commentator on Yemen's politics, policies and people, our LC is dedicated to peace and has extensive experience of conflict and security issues, including more than a decade working with international organisations and NGOs in Yemen.

We are delighted to welcome our LC to the Insight on Conflict team, and their knowledge and connections have so far allowed us to profile many local organisations working to build peace in Yemen. Because of the ongoing conflict, we are are unable to list them publicly. But we can provide details on request, in addition to our other research: a conflict profile which provides an overview of the causes and consequences of violence in Yemen, listings of the international and international non-governmental organisations with projects in the country, and expert comment on the issues facing Yemen, published on our blog.

Insight on Conflict now covers 31 regions around the world
As part of our blog coverage, our LC has provided us with an overview of the situation at the outbreak of violence in Yemen, which you can read here. Several excellent contributors have also given us further original analysis of the situation in Yemen.

Helen Lackner argues that bad politics and policies have led to a failure of political and development reform, which has contributed to the breakdown of state and society. Dan Varisco describes the recent efforts of Yemeni women to bring a halt to the violence. And Najwa Adra makes a case for the full involvement of tribal political structures in peacebuilding, if Yemen is to emerge from the current conflict as more than the sum of its parts.

We are keen to publish more debate on this under-reported area, so if you have experience of peacebuilding issues in Yemen then please get in contact with us. In the meantime, our unique network of Local Correspondents continues to grow. Their combined expertise is allowing us to map more regions, in more detail; in addition to Yemen, which brings the total number of regions we cover to 30, we will be adding another 14 areas this year as part of our EU-funded expansion. Check back soon for more of the latest news, analysis and debate on conflict and security issues around the world.

Kevin McCann is Peace Direct's Research and Engagement Officer. His work includes helping to run Insight on Conflict, developing new publications, and supporting Peace Direct’s conflict early warning projects. He has an MA in International Security.
Read more from Kevin McCann
Disclaimer: The views expressed in this article are those of the author and do not represent the views or position of Peace Direct.