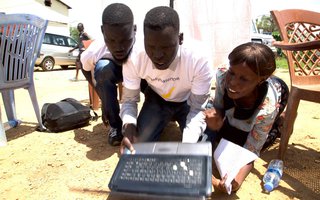 Defy Hate Now
This article was written by Ochan Hannington was originally published on Peace News.

During his recent appearance before US Congress, Facebook CEO Mark Zuckerberg admitted that hate speech can be difficult to identify, and that it is a concern for both his company and for a global society. The danger of hate speech online has been particularity noted in South Sudan, where observers believe it has contributed to the ongoing civil war there.

Now an NGO called Defy Hate has begun training South Sudanese youth to recognize and combat online hate speech, both in the capital city of Juba and also in Uganda, where many South Sudanese have been forced to flee. They have started a campaign called #ThinkB4UClick, which involves IT training sessions that focus on how to identify hate speech in social media, as well countering hate speech online. Peace News spoke with organizers and participants in Uganda about the issue, and what can be done about it:

"This thing of inciting violence with social media - it's real,” said Defy Hate trainer Otim Francis. “It has happened in several occasions in South Sudan. This is a campaign aimed at raising awareness on the misuse of social media."

"We can use it for good instead of using it for bad. We learn to verify the information before we pass it on."

"I think generally we are not trying to use the social media constructively, for good purposes,” said participant Samuel Sebit Emmanuel. “So this training is very very important."

The training looked at issues such as prejudice awareness, identifying reliable sources, online peacebuilding, and constructive ways to deal with hate speech. There's a critical line however, between freedom of expression and hate speech, which is something the team at Defy Hate also cover in their training.

"We don't stop - you have your choice, your opinions, to say things - we respect that. There's always a freedom of expression for anyone, but how do you use that opportunity that has been given to you? Do you use it correctly or do you use it to incite violence?"

To help organizations like Defy Hate monitor and counter hate speech online, PeaceTech Lab have been tracking hate speech in South Sudan, and have come out with a lexicon of terms that are likely to incite violence.

"One of those terms is MTN,” said Theo Dolan from PeaceTech Lab, “Which is a mobile phone company in South Sudan - and elsewhere in Africa - and MTN was used as a derogatory reference to the Dinka tribe, basically referencing allegations that they're land-grabbers and have a disproportionate share of political influence in South Sudan."

"That's what we want to build on with our work going forward,” Mr Dolan said, “How do we identify the language involved, and understand the connection between online and offline, and then how can we create a mechanism for early response?"

Participants told us that another one of the reasons they signed up to Defy Hate's training was to change the perception of South Sudanese themselves, and that they aim to show the world that people on the ground are working towards solutions and are building unity between divided groups.

"Many people have spoken a lot of things about us, about South Sudan, which are really bad,” said Mr Emmanuel, “But we said 'it's time for us to re-write the narrative' and have something better for South Sudan."

Ochan Hannington is a Peace News Network contributor, based in Uganda. He is passionate about film-making, telling people's stories, sharing media training, and has also worked for MiCT's The Niles.
Read more from Ochan Hannington

Conflict prevention and early warning Culture, media and advocacy Children and youth Technology and peacebuilding
Disclaimer: The views expressed in this article are those of the author and do not represent the views or position of Peace Direct.