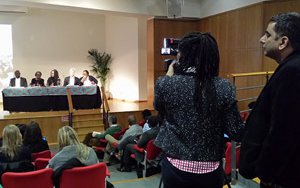 The 'How to Fix Nigeria' series is being held at the Royal African Society, based at London's School of Oriental and African Studies.

As Africa’s richest and most populous nation, what happens in Nigeria matters. And its citizens are on tenterhooks. On February 14, they will vote on whether to extend the mandate of the current Nigerian president, Goodluck Jonathan, or appoint challenger Muhammadu Buhari in his place.

But politics is a complicated business, and with doubts about the government’s ability to manage its oil wealth, tensions are running high as the election approaches. London’s Royal African Society held a panel discussion in January on the upcoming election, as part of its How to Fix Nigeria? series on the country’s prospects for 2015 and beyond. Peace Direct went along.

How to fix Nigeria - but is it broken?

Award-winning Nigerian broadcaster Funmi Iyanda chaired the discussion. Opening proceedings, she highlighted the fear that a disputed result might lead to violence. And noting the tendency to see the poll as a referendum on Goodluck Jonathan, she put the question to a packed room: “Does it matter that the election seems to be all about personalities? Where are the issues?”

The issues, of course, are many. Summing them at up at Iyanda’s request, development expert Zainab Usman – a doctoral candidate at Oxford University – said that corruption, the oil sector, the economy and Boko Haram were the topics on most people's lips. But she also highlighted the communal violence in the Middle Belt, which has “eluded the media spotlight”.

All of this has led to fears that the election could turn ugly, whatever the result. Adams warned: "There seem to be people on both sides who won't accept the result if it goes against them, and that's dangerous."

There are also concerns that some people in Nigeria's northern states may not be able to cast their votes because of the worsening security situation.

These procedural issues are crucial, said Usman: "The best thing that can be done to mitigate the possibility of violence is to ensure that votes count. People must not feel that they have to take things into their own hands."

For Michael Ehioze-Ediae, a barrister and writer, the violent activity of groups like Boko Haram is the “logical outcome of decades of misgovernance”. There are many dimensions to the causes and consequences of Boko Haram's actions, he added, saying that problems with deep roots cannot be solved overnight. “Change is not something that happens automatically.”

Nonetheless, cultural critic Tola Sarumi said that Nigeria has “failed to take responsibility for its violence. Every time it happens, no-one gets punished. This emboldens people.” For Sarumi, national cohesion – or the lack of it – is one of the obstacles in the way of fixing Nigeria. She said that the government should do more to bring local, traditional and community leaders together to find common cause.

Preparing for peace: the importance of local leaders

Speaking to Peace Direct after the event, chair Funmi Iyanda said that she had enjoyed the “very spirited – and very necessary – debate.”

That much is clear. As for the outcome - it is too close to call. But Peace Direct will be following the results closely. Via our Local Correspondent in Nigeria, Michael Olufemi Sodipo, we will be monitoring the work of local peacebuilding groups around the country. The factors that create the potential for conflict may seem endemic - but violence does not have to be inevitable. We know there are people working to prevent it.