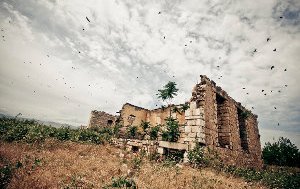 The articles in this issue provide a guide to understanding, probing, and predicting world events. It is natural to feel despair when following the news today as headlines continue to highlight escalating conflicts and crises across the globe. But what if we can turn despair into knowledge, action, and prevention?

Building Peace is a regular publication from the Alliance for Peacebuilding which looks at some of the most pressing issues facing peacebuilding. The latest issue focuses on how to foresee and prevent future conflicts. It includes articles on peacebuilding technology, conflict minerals, and crime.

The relative calm achieved during the 2013 general elections has increased complacency about the risk of political violence in Kenya—particularly among international actors. The fear that drove people’s vigilance, restraint, and withdrawal from potential trigger situations in 2013 is likely to dissipate, as the 2007–08 postelection violence becomes a more distant memory.

Elections and violent conflict in Kenya, from USIP, attempts to understand how Kenyan's experienced the 2013 elections. The elections in 2007 were followed by widespread violence. Considerable effort was made to ensure the violence was not repeated in 2013. The fact that violence appeared not to reoccur was seen as a great success. However, the experiences of local people suggest that the efforts were not as successful as they appeared.

Rhetoric or reality? Putting affected people at the centre of humanitarian action

Examples from the Philippines, Syria, and other places showed that people are communicating and organising themselves and that many aid agencies are still playing ‘catch-up’ to the discussions and racing to meet expectations and explain their approaches, given the access to information and social media that many people affected by crises now have.

Rhetoric or reality, from ALNAP, discusses current approaches and methods of putting local voices, experiences, and capacity at the centre of humanitarian action. The paper looks at some best practices and challenges for engaging with local people.

Women and inclusive peacebuilding in Afghanistan

Those working on governance programmes in fragile contexts should be aware that ‘civil society’ is not homogenous, that groups may not always share the same interests and perspectives, and that there may be a need to actively foster solidarity and co-operation between them.

Women and inclusive peacebuilding in Afghanistan, from Oxfam, looks at Oxfam's "Within and without the state" programme, building the capacity of civil society in Afghanistan to promote participation of marginalised groups. The report shares the key learnings from the project.

Stealing the revolution: violence and predation in Libya

Conscious of both the state’s structural weaknesses and the perils that threaten their interests, tribes have been quick to equip themselves with armed militias while jihadist groups have simultaneously been expanding.

Stealing the revolution, from NOREF, examines what is driving the escalation of violence and the proliferation of armed groups in Libya. The paper finds that a key cause of violence are various groups seeking to secure territory and resources in the absence of a functional state.

Social cohesion and community based protection mechanisms in Chad and Burundi

Time for real democracy for Bosnia?

By Tim Bidey: Bosnia’s complicated constitutional setup is a hindrance to change. Reforming it would help the country secure its future. Read more »

Terrorism in the Sahel: fighting the enemy within, from within

By Oumarou Gado: Incorporating informal leadership structures into dialogue is vital to building peace in the Sahara Read more »

The role of social media in the South Sudan crisis

By Khamis Cosmas: To what extent did social media fuel the recent violence in South Sudan? Read more »

By Adan E. Suazo: What does the decreasing availability of water mean for peacebuilding?Read more »

By Aden Abdi: A mixture of robust conflict management, good governance and addressing historical injustices are key to a durable solution, not just in Mandera but across the whole of northern Kenya. Read more »

Would a peacebuilding strategy respond to Nigeria’s unanswered questions?

By Charles Kwuelum: Why Nigeria needs a comprehensive strategy for building peace and reconciliation that puts local voices at the centre. Read more »

By Tugce Ercetin: How is peacebuilding being approached in the Nagorno-Karabakh conflict? Read more »

Tossamaidan: a peaceful resolution of a Himalayan conflict

By Ashima Kaul: How local people in the Kashmir Himalayas shut down an army firing range. Read more »