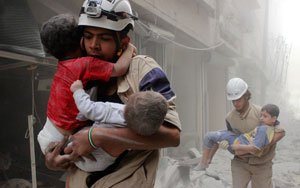 Politically smart, locally led approaches are not mainstream practice, but neither are they rocket science. They have much in common with good policy-making anywhere; indeed it is a measure of how detached the aid business has become from everyday reality that we should consider any of the seven cases remarkable.

Politically smart, locally led development, from the Overseas Development Institute, presents seven examples of where aid donors have used "politically smart" and locally-led approaches to development. The examples show how this approach can often achieve better results than more traditional ways of working.

Beyond bandaids: Rebuilding market systems amidst catastrophe in South Sudan

Market-based interventions that support these local systems will significantly expand the reach of the current humanitarian response. If implemented robustly and correctly, these interventions can help mitigate the food security crisis, maximize cost efficiency of assistance dollars, and lay the foundations for early recovery.

Beyond bandaids, from Mercy Corps, argues that the international response to the possibility of famine in South Sudan is insufficient and not doing enough top avert the crisis. Instead of short term, direct delivery aid, the paper calls for interventions that re-stimulates local markets.

Understanding why individuals engage in violent extremism is critical not only to developing effective and appropriate strategies to counter potential violence but also to promoting the empathy needed to provide openings for these measures.

Creating spaces for effective CVE approaches, from USIP, looks at strategies for preventing violent extremism and radicalisation. Using Kenya as an example the paper stresses the importance of empathy and understanding when dealing with young people at risk of joining violent groups.

Women, peace and security in Afghanistan: looking back to move forward

What emerges are strong cross-cutting themes regarding the ways in which communities in Afghanistan can develop the capacity for resilience and the challenges and opportunities for women to play an active and vital role in the peace and reintegration processes. Participants outlined a strong need to ensure that peace processes are not merely political but community-based and community-led, with sufficient mechanisms for civil society and population consultation and oversight.

Women, peace and security in Afghanistan, from Equality for Peace and Development (an Afghan peacebuilding organisation) examines the role of women in Afghanistan's peace process. Based on a series of consultations with female leaders and community members, the report recommends a greater role for the grassroots.

With an emphasis on the strength and capabilities of local communities, prevention planning and early warning, and focus on risk and community response, the concept of resilience is gaining sway in the peacebuilding community. There is a growing sense that strengthening communities’ capacity to overcome violent shocks opens up new possibilities both for conflict prevention and for more sustainable post-conflict community recovery.

Insights is a regular publication from USIP which examines major questions in the theory and practice of peacebuilding. The latest edition looks at the concept of resilience and how the idea is applied to peacebuilding. The paper includes an introduction to the concept, and examples of how it is used in practice.

Canada as a peacemaker in action

By Gabriela Monica Lucuta: Canada’s role in developing “‘responsibility to protect” and the for wider inclusion of the concept in peacekeeping and peacebuilding Read more »

War, peace and the second term of Colombia’s President Santos

By Hasan Dodwell: What the reelection on President Santos means for the peace process in Colombia. Read more »

By Charles Martin Shields: The GDELT Global Dashboard is a new tool for visualising conflict and protest events on a global scale.Read more »

By Kisuke Ndiku: The challenges facing South Sudan as the country searches for peace. Read more »

Our mission is to save life, not to take it

By Tim Bidey: Tim Bidey, from Post-Conflict Research Center, explains the difference that receiving the Intercultural Innovation Award will make for the organisation. Read more »

Natural resources and violence in Nigeria

By Adan E. Suazo: Is unequal access to Nigeria’s mineral wealth partly to blame for the rise of Boko Haram? Read more »

Community based sociotherapy in Rwanda: healing a post-violent conflict society

By Jean de Dieu Basabose: How “community based sociotherapy” is being used to heal the wounds of the past and build social cohesion in Rwanda. Read more »